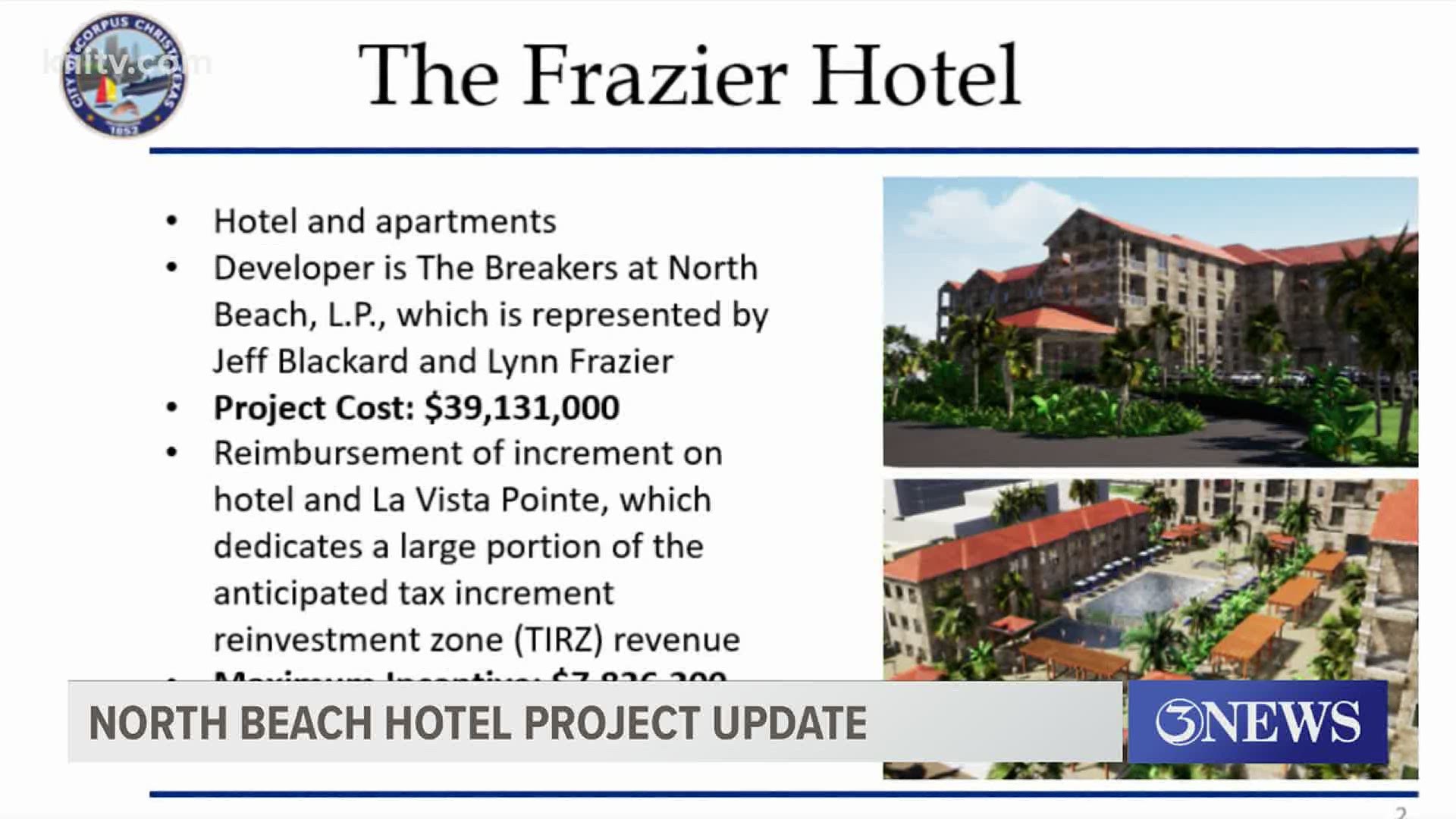 CORPUS CHRISTI, Texas — Developers of a $40 million dollar luxury hotel and apartment building are getting a lifeline by the tax increment reinvestment zone #4 OR TIRZ #4 board to start construction on their project. The project will be located on North Beach.

The board had the option of ending the agreement if they couldn't come to terms on a new one after the developers missed the original deadline to begin work. On the line was over $7 million dollars in tax incentives.

It's planned location is along Surfside Blvd on North Beach. It would include a 138-room luxury hotel along with 109 apartments, a restaurant, fitness center, and pool.

However, construction that was scheduled to start this summer based on the original agreement between the developers and the TIRZ #4 board has not moved forward.

COVID-19 being one of the reasons, but also the unknown status of the city's plan for a canal system is another reason said to be the cause of the delay.

"We have a huge problem with drainage there. How would anyone want to spend $40 million dollars on a hotel until the drainage is fixed, and see on paper how that drainage is going to work not only for his hotel but for the rest of the attractions," said Carrie Robertson-Meyer who lives on North Beach and is a member of the TIRZ 4 board.

The board that is tasked with helping look at how to spend tax dollars and keep that money invested in north beach.

However, the area is prone to serious flooding and is said to pose a challenge for developers.

You might recall a canal project has been proposed to help alleviate the drainage issues on North Beach.

The city of Corpus Christi approved to hire a firm to conduct a feasibility study and to design the canal. The study is expected to be completed by the end of the year.

"At least if we present a detailed plan of what the canal would look like, that would alleviate all the concerns I think they have regarding elevations and things like that," said Tom Schmid who is the CEO of the Texas State Aquarium and also a TIRZ #4 board member.

The canal project itself is tied to an overall vision set out by developer Jeff Blackard of Blackard Global.

He originally came up with the idea for a canal system as the center piece for further development of this often-overlooked area.

Along with Blackard, developer Lynn Frazier has already invested money into North Beach. Currently under construction is a multi-million-dollar project called Lighthouse Pointe that will be made up of apartments, restaurants, and a 136-foot Texas lighthouse.

As for the Frazier Hotel, board members approved to give the developers until the end of 2024 to begin construction.