Election Day results and the latest updates from around the Houston, Texas area and the U.S. presidential election. 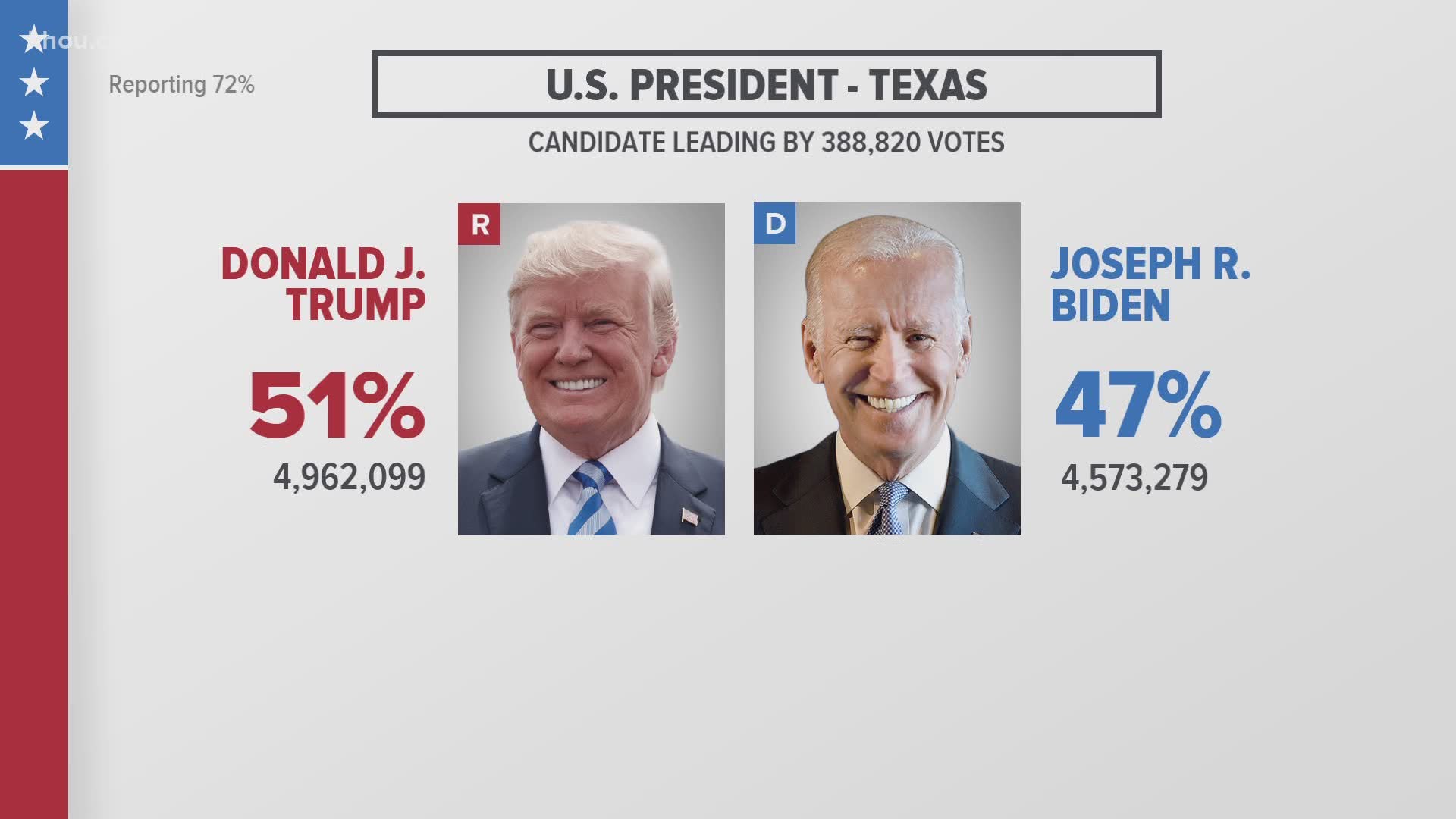 RELATED: How to check voting waiting times in the Houston area

Election Day 2020 results can be viewed on the results page here. Nationally, the first polls close at 6 p.m. Central / 7 p.m. Eastern. Check back here and on the KHOU 11 mobile app as the first results come in, and make sure you turn on the alerts in our app. Also read how KHOU 11 will declare winners in the 2020 Election.

Election updates from Houston, Texas and around the United States:

Tue. 10:50 p.m. — What a view. Here is a look at the 14 Election Day ballot drop-off drive-thru lines at the central counting station for Harris County. They can process up to 42 cars at a time.

The 14 #ElectionDay ballot drop-off drive-thru lines at the central counting station for @HarrisVotes can process up to 42 cars at a time. 200,000+ voters cast their ballots in person today. #Election2020 #khou11 https://t.co/8n5kXpySrg

Tue. 8:47 p.m. — According to the Associated Press, Democrat MJ Hegar has conceded in her bid to unseat Republican U.S. Sen. John Cornyn of Texas.

Hegar called Cornyn at 8:20 p.m. Tuesday to concede, Cornyn spokesman Travis Considine said. The Associated Press has not yet called the race.

Cornyn held an edge in polls and fundraising for most of the race but was still forced into mounting an unusually aggressive defense of his 18 years in the Senate.

Democrats poured millions of dollars behind Hegar, a former Air Force helicopter pilot who narrowly lost a U.S. House race two years ago. She accused Cornyn of delivering little for Texas over his long stint but didn’t generate the same enthusiasm of Democratic challengers in battleground Senate races elsewhere.

Hegar tweeted the following message: "I'm so proud and incredibly grateful for all of your support. Together, we've worked so hard, and overcome so much, shattering expectations along the way. We’ve built a powerful grassroots movement from the ground up, and I know our fight here in Texas is far from over."

Cornyn tweeted the following: "It is the honor of my life to serve Texas in the U.S. Senate. Inspired by your trust and your patriotism, I will continue to be a strong voice for our values in Washington. Thank you, Texas!"

"On behalf of the men and women of @houstonpolice and our partners throughout @HoustonTX, thank you H-Town for being the great community you are. Today and early voting went extremely well. My heartfelt thanks goes out to our first responders and our community. #HoustonStrong "

On behalf of the men and women of @houstonpolice and our partners throughout @HoustonTX, thank you H-Town for being the great community you are. Today and early voting went extremely well. My heartfelt thanks goes out to our first responders and our community. #HoustonStrong

Tue. 7:50 p.m. — U.S. Rep. Dan Crenshaw tweeted the following after he was declared the winner by the AP: "Thank you TX-2!!! It’s been an honor to represent you and an honor to continue representing you."

Tue. 7 p.m. — Voting centers in Harris County have begun closing up shop. Harris County Clerk Chris Hollins says we should have some of the returns soon.

Tue. 6:50 p.m. — Harris County Clerk Chris Hollins says that more than 200,000 votes were cast in-person on Election Day. He pleaded for those who have not voted to head to the closest polling place to them.

Harris County Judge Lina Hidalgo says that the county had more than 65% voter turnout, the highest 1992.

We just passed 200,000 votes cast in-person today in Harris County. Voting Centers will close at 7 p.m., but if you're in line, stay in line! There's probably a location five minutes from you, so why not give it a shot? https://t.co/s3HBl2J9bW #HarrisVotes #HouNews pic.twitter.com/Kmq0E7vq8p

NEW: Harris County has crossed 200k Election Day voters, and hit 65%+ turnout, our highest since 1992. If you're in line stay in line!

Tue. 5:20 p.m. — Election officials in a few states are warning voters to disregard "robocalls" urging them to stay home rather than go to the polls. It's unclear whether the calls were part of any partisan agenda. They have hit Republican-leaning states as well as Democratic ones.

One series of them appeared to have gone out around the country and didn't reference the election. Another appeared targeted specifically at voters in Flint, Michigan, a Democratic stronghold with a large African-American population.

The FBI is investigating calls that seek to discourage people from voting, a senior official at the Department of Homeland Security told reporters Tuesday.

Tue. 4:05 p.m. — Things got heated outside a polling place in Montrose Tuesday afternoon. Biden supporters outside the West Gray Multi-service Center got into a shouting match with a Trump supporter. It's not clear what led to the confrontation but abortion was mentioned and the Biden supporters were telling the man to stop cussing at them.

It just so happened, Sheriff Ed Gonzalez was campaigning at the polling place and he separated the groups.

With three hours left until polls close, there have been few reports of problems in Harris County.

Tue. 2:40 p.m. — Supporters cheered and applauded President Donald Trump at his campaign headquarters, where he visited Tuesday to thank dozens of staffers working to get him reelected. Trump predicted his victory, but acknowledged he could lose.

“I think we’re going to have a great night, but it’s politics and it’s elections and you never know,” Trump said.

He said his campaign was doing well in states like Florida, Arizona and Texas and noted the importance of winning Pennsylvania.

Tue. 2:30 p.m. — A federal judge has ordered U.S. Postal Service inspectors to sweep more than two dozen mail processing facilities for lingering mail-in ballots and to sent them out immediately.

The order, which includes centers in central Pennsylvania, Philadelphia, Detroit, Atlanta, south Florida and parts of Wisconsin, comes after national delivery delays leading up to the election and concerns the agency wouldn’t be able to deliver ballots on time.

The Postal Service’s ability to handle the surge of mail-in ballots became a concern after its new leader, Postmaster General Louis DeJoy, a major GOP donor, implemented a series of policy changes that delayed mail nationwide this summer.

#BREAKING: Fort Bend is the first reported county in the State of Texas to surpass 70% turnout.

I encourage everyone to take advantage of polls being open till 7pm and that you can #Vote at ANY polling location countywide.

NEW: Harris County has now crossed 1.5 million votes, with 83k votes at 11:30am. Keep it coming! We now have more votes cast than 11 states have people. We’re coming for you next, Idaho.

Tue. 11:35 a.m. — While many are bracing for it to take several days or possibly weeks to officially determine who the next president will be, Harris County Clerk Chris Hollins says he will release the first tally at about 7 p.m. Tuesday night - as usual - with the rest of the voting results being added as they come in. “We will not have an election week here in Harris County, we will have an Election Night," he tells KHOU 11's Adam Bennett.

Harris Co. Clerk says he'll release the unofficial tally as usual: Early voting + mail ballots (1.4M+) around 7p, the rest of the results as they come in. @cghollins: “We will not have an election week here in Harris County, we will have an #ElectionNight." #Election2020 #khou11 pic.twitter.com/I2PbZPt8R9

Tue. 11:25 a.m. — It doesn't get much more Texas than this - some voters in Acres Homes arrived by horse at the polls on Tuesday morning:

At 11 a.m., more than 75,000 votes have been cast in Harris County so far on #ElectionDay. Confused about anything? Have questions? Call us at 713-755-6965. Find Voting Centers at https://t.co/s3HBl2J9bW #HarrisVotes #HouNews pic.twitter.com/vt0zZfwMCA

Tue. 8:40 a.m. — Fort Bend County confirms that a few of its polling sites this morning are again experiencing issues - possibly technical. One of the impacted locations is the Mission Bend Library, although voters on Twitter have also said locations in Sugar Land are impacted. The county says they are troubleshooting the issues, which they say are not as widespread as the delays and issues reported on the first day of Early Voting last month.

Tue. 8:40 a.m. — We're still in a pandemic, so the Houston Office of Emergency Management has these health-minded tips for voters today: "Avoid direct contact;  Wash or sanitize your hands; Wear a mask" .. They also remind voters you can check wait times at various polls to try and avoid crowds.

Tue. 7:05 a.m. — The blast of a horn and a prayer. Here's how some voters and supporters got Election Day started at the polling location on West Gray in Houston. Recorded by KHOU 11's Xavier Walton:

Tue. 7 a.m. — Polls opened across Texas Tuesday morning as election officials warned millions of absentee ballots could slow the tallies across the country, perhaps for days.

Tue. 6:54 a.m. — Races to watch in Texas: We're finally to Election Day 2020. It's been a long campaign and now the voters get their say in several key races. President Donald Trump and former Vice President Joe Biden are going head-to-head in the race for the White House. Senator John Cornyn is taking on Democratic MJ Hegar in the Senate race  There are several key U.S. House races and the Texas House races could define the state for the next decade. Read more here.

Tue. 6 a.m. — In case you missed it, it's currently a 'Texas toss-up' as a new poll shows Lone Star State is all tied up | President Donald Trump and former Vice President Joe Biden are neck and neck in Texas at 48.1%, according to a poll released Thursday. The last poll for Texas released just before Election Day by Morning Consult shows the race is a tie between Trump and Biden. Read more here.

Tue. 3:42 a.m. — (AP) Election Day is here with massive voter turnout expected | The scourge of a global pandemic produced an election season like no other in the U.S., persuading record numbers of Americans to cast their ballots early, forcing states to make changes to long-established election procedures and leading to hundreds of lawsuits over how votes will be cast and which ballots will be counted. Polls began opening Tuesday as election officials warned that millions of absentee ballots could slow the tallies, perhaps for days, in some key battleground states and as President Donald Trump threatened legal action to prevent ballots from being counted after Election Day. Read more here.

What you need to know: