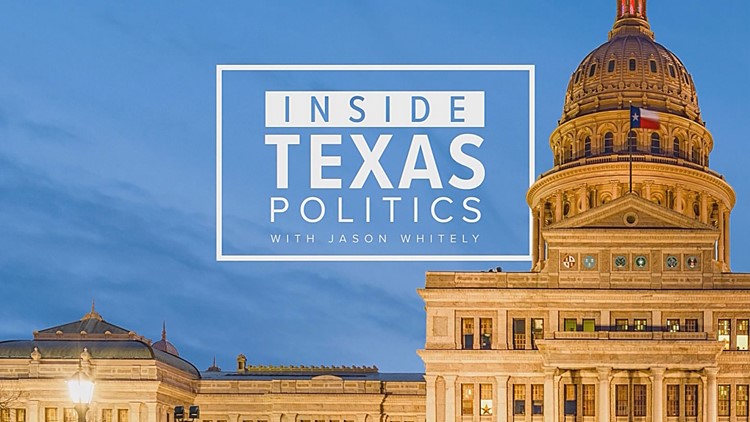 DALLAS — A bi-partisan push is underway by Texas lawmakers to stop the execution of Rodney Reed on Nov. 20. Host Jason Whitely was joined by a number of guests on this week's Inside Texas Politics to discuss that case and other big stories in Texas politics.

A number of Texas lawmakers want to stop the execution of Rodney Reed on Wednesday, Nov. 20 for the murder of Stacey Stites in Bastrop on April 23, 1996. Reed’s guilt is widely doubted and has been questioned for years. Now, 26 members of the Texas House – Republican and Democrat – have written Texas Governor Greg Abbott asking him to put the execution on hold. State Representative Victoria Neave, a Dallas Democrat, is one of those who signed the letter. Rep. Neave joined host Jason Whitely and Bud Kennedy from the Fort Worth Star-Telegram.

The deadly massacres in El Paso and Odessa shook Texas politics. Lieutenant Governor Dan Patrick -- even defying the NRA – said he'll take the lead on background checks in gun sales in this state. A new Texas Tribune and The Texas Politics Project at UT Austin poll said Texas voters also want that and red flag laws. However, voters are split on renewing the assault weapons ban. Ross Ramsey, co-founder and executive editor of the Texas Tribune, discussed whether the legislature is listening to voters. The two also talked about another finding in the poll. It also showed that more than half of Texas voters say they will not vote for Donald Trump - but when given a list of potential Democrats, the president wins.

Judges sometimes have a difficult time balancing justice with mercy.  In this week’s My Voice, My Opinion, contributor Chris Krok – from WBAP 820 AM – said Dallas judges really messed up with one criminal, and it could have cost a young mother her life.

In shocking news out of Houston last week, the state announced it is taking over Houston ISD. The Texas Education Agency will dissolve the board and remove its superintendent. The TEA is making this move because some campuses at the district have persistent problems -- not to mention issues with the board itself. School districts across the state are watching to see how this will unfold. Dallas ISD Trustee Joyce Foreman joined host Jason Whitely to discuss what implications this could have for other school districts.

Republicans lost the legislature in Virginia and the governor’s seat in Kentucky last week’s elections. These were two Republican strongholds. What these loses might suggest about Texas next year sparked Flashpoint. From the right, Wade Emmert, former chairman of the Dallas County Republican Party. And from the left, Rich Hancock from VirtualNewsCenter.com.

Filing began for the March primaries this week. Since Beto O’Rourke is no longer running for President of the United States, Democrats won't have his campaign spending behind them. Does that give an edge back to Texas Republicans? Ross Ramsey, Bud Kennedy and Berna Dean Steptoe, WFAA's political producer, joined host Jason Whitely to discuss that and the 33 Texas House seats Republicans say are up for grabs on both sides in 2020.