Speaker Bonnen to gun rights activist: 'If you find yourself in a hole, stop digging'

The executive director of Texas Gun Rights said Bonnen should apologize for how he characterized McNutt's lobbying efforts for "constitutional carry" legislation that has since been declared dead in the lower chamber. 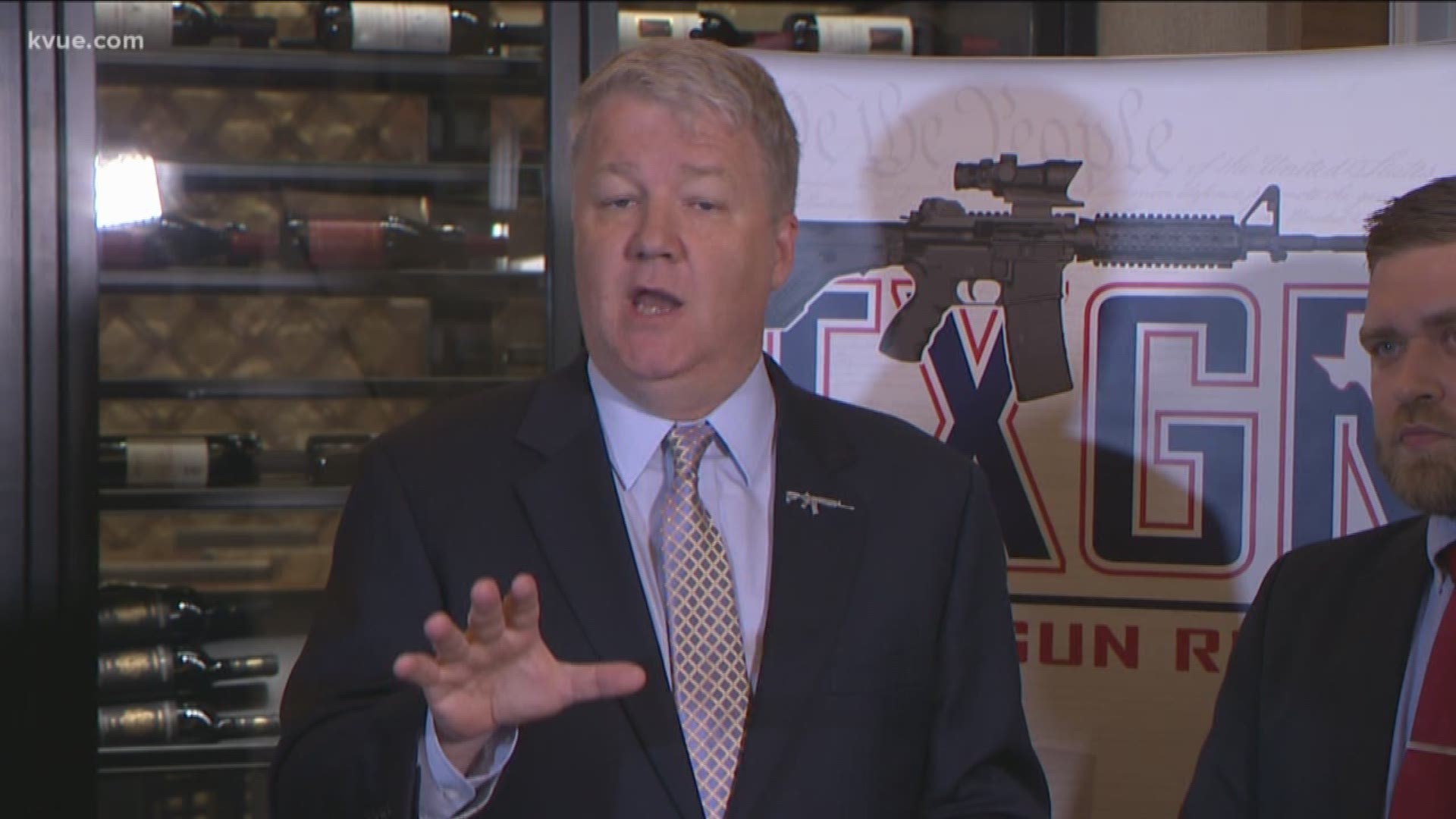 AUSTIN, Texas — Weeks after getting in a confrontation with Texas House Speaker Dennis Bonnen at a closed-door Republican dinner, gun rights activist Chris McNutt asked for an apology for what he said amounted to having his name “dragged through the mud.”

“They’ve painted this narrative of this outraged gun activist,” McNutt told The Texas Tribune after a press conference he had Tuesday afternoon inside the JW Marriott hotel in downtown Austin. “It just makes me looks like a complete nut job.”

During Tuesday’s news conference, McNutt accused Bonnen, R-Angleton, of lying when he told Lubbock radio host Chad Hasty that the gun rights activist “flashed his gun” when he visited lawmakers’ local district offices. McNutt said he was unarmed during such visits.

Rather than comment on claims McNutt made this afternoon, a spokeswoman for Bonnen said that “it appears someone has forgotten the law of holes.”

“If you find yourself in a hole, stop digging,” Bonnen spokeswoman Cait Meisenheimer said in a statement to KVUE.

Bonnen previously accused the gun rights activist of using intimidation tactics to get a bill McNutt supports through the legislature. McNutt, the executive director of Texas Gun Rights, blames Bonnen for inaction on “constitutional carry” legislation that would allow Texans to carry guns without a permit.

Weeks after appearing in Bonnen's neighborhood while the speaker was in Austin, McNutt was seated close to the House leader at a fundraising dinner. Bonnen approached McNutt, chided him for his previous actions and eventually left the dinner, skipping out on a speech the speaker was scheduled to give.

During Tuesday’s press conference, however, McNutt refuted claims that he was ever on the speaker’s property. He said he canvassed “multiple other neighborhoods” in two other legislators' districts to “turn up the pressure on the speaker of the House.”

“When I was in the speaker’s neighborhood canvassing, I saw [Texas Department of Public Safety] troopers posted outside of his house, so I actually approached them them,” he said. “I wasn’t intercepted, detained, arrested or anything. I told them what I was doing and they offered to place the fliers that I had on the speaker’s door for me.”

McNutt presented recently released body cam footage from the DPS that he obtained from the agency through an open records request. According to the department’s account of the events, which was sent to The Texas Tribune, McNutt identified himself to officers outside Bonnen’s residence while wearing a “blue Texas Gun Rights shirt and blue jeans.”

“I stated I would be more than happy to drop off the flyer at the residence and he handed me the flyer, and gave me one as well as a business card,” said DPS trooper James Johnson. “McNutt stated he was from the Dallas area and flew down here, rented a car and was going to visit Representative Bonnen and his people.

“McNutt did not make any threatening statements towards Representative Bonnen's people or myself. I did not observe McNutt wearing any type of firearm at that time. After a brief conversation McNutt drove out of the neighborhood without incident.”

McNutt and Dudley Brown, president of the National Association for Gun Rights, didn’t place any blame Tuesday for the constitutional bill’s failure on its author, state Rep. Jonathan Stickland, R-Bedford.

“The speaker intended to kill this bill the moment he appointed an anti-gun Democratic to chair the committee he assigned the bill to,” McNutt said, referencing state Rep. Poncho Nevárez, D-Eagle Pass, who chairs the House Homeland Security Committee.

Nevárez disputed that assertion in a text message to the Tribune later Tuesday.

This article originally appeared in The Texas Tribune at https://www.texastribune.org/2019/04/23/texas-house-speaker-dennis-bonnen-lied-says-gun-rights-activist.