Tori Baltierra from the band Tiarra Girls joined the activists on-site to perform “Amazing Grace” in conjunction with the rose petal drop. 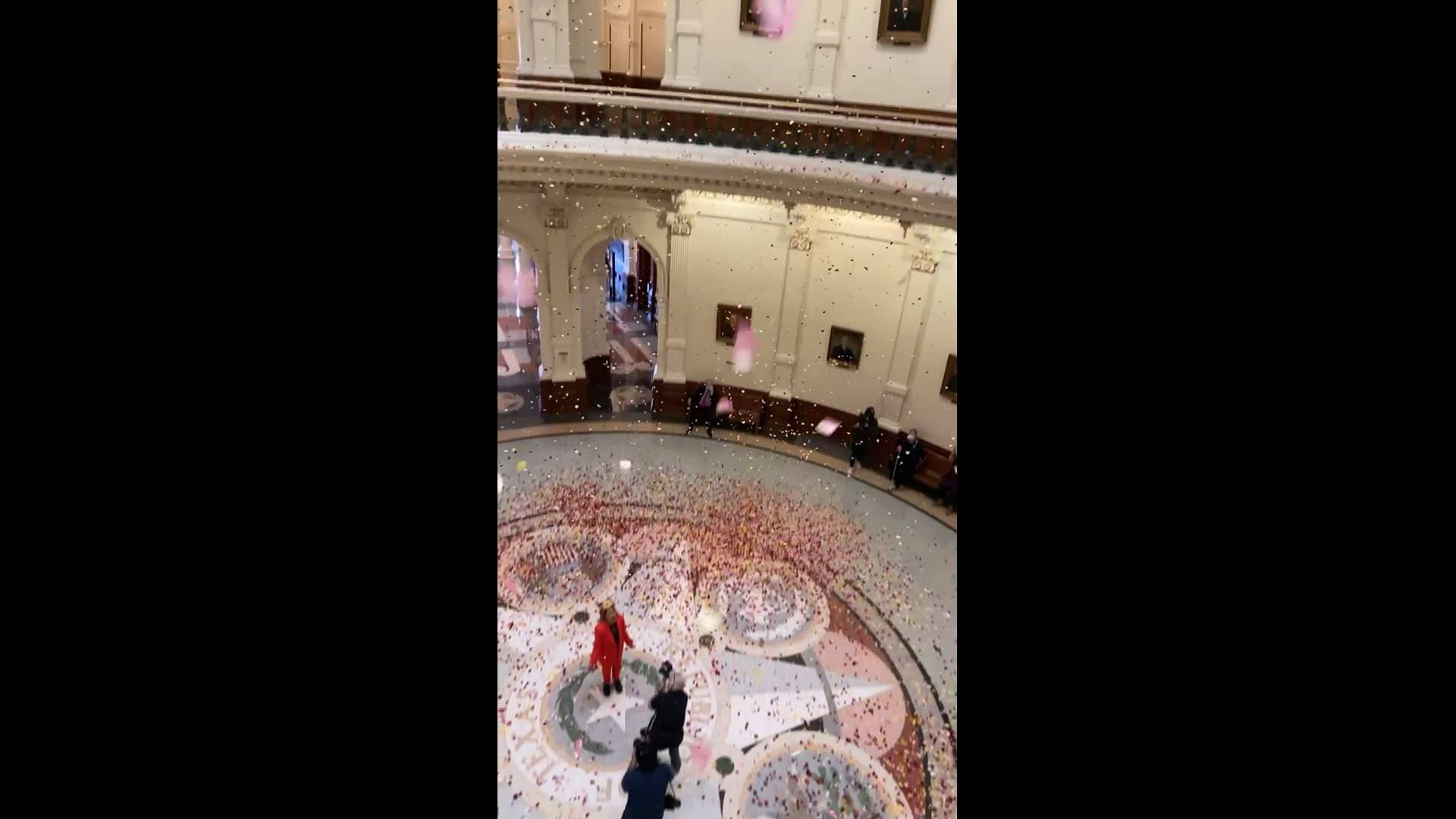 AUSTIN, Texas — On April 8, youth activists in middle school, high school and colleges dropped nearly a quarter of a million rose petals onto the Texas Capitol rotunda to celebrate the nearly 270,000 Texans of color who turn 18, voting age, each year.

Tori Baltierra from the band Tiarra Girls joined the activists on-site to perform “Amazing Grace” in conjunction with the rose petal drop. Local nonprofit organizations Jolt Action and NextGen America are calling on State legislators to vote “no” on House Bill 6 and Senate Bill 7. They say those bills, if passed, would further restrict young voters of color from exercising their right to vote.

RELATED: Texas House committee advances bill that would make it a crime for election officials to send unsolicited vote-by-mail applications

“In the last two years, Texas has seen more mass shootings than proven incidents of voter fraud. Our state has now confirmed over 200 deaths due to the power grid failure during February’s storm. And yet legislators are more interested in passing laws that cut back Texans’ access to the polls,” said Cristina Tzintzún Ramirez, executive director of NextGen America. “Texas historically has had one of the lowest voter turnout rates and Republicans have liked it that way, but now young people are turning out like never before. Those young voters, who are majority Brown and Black, threaten their power. We’re here to tell them that Black and Brown voters aren’t the future; we’re the now. We are the diversity some legislators don’t want the rest of the country to see. And we won’t stand for Republicans trying to leave us out of our great nation’s democracy and voting rolls.”

Following the rose petal launch, the group will make its way outside the Capitol, where speakers will discuss the implications of the legislation and its disproportionate impacts on Latinx communities and communities of color, according to event organizers.

On March 25, activists dressed in hazmat suits demonstrated with “suppress the virus, not the vote” signs at the Capitol, outside the committee hearing room.

The Texas House committee on April 8 advanced House Bill 6, the Texas Tribune reported. The legislation was approved by the House Elections Committee on a party-line vote with only Republicans voting in favor of it.

"Senate Bill 7 is about voter security, not about voter suppression, and I'm tired of the lies and the nest of liars who continue to repeat them," said Patrick.

“This past year, Texas broke all voter turnout records, and rather than celebrating and asking what we did right, lawmakers are making it more difficult in every phase of the voting cycle to have people have their voice heard,” said Aaron Gonzalez, a 26-year-old based in Austin. “SB7 and HB6 represent extreme suppression tactics that will be seen in history for what they are – voter suppression. Young people are waking up and realizing their power. Our voices are diverse and our voices are what the future of Texas looks like.”