Andrew Yang drew a crowd at Gilley’s in Dallas Friday night and Michael Bloomberg will visit Plano on Saturday. 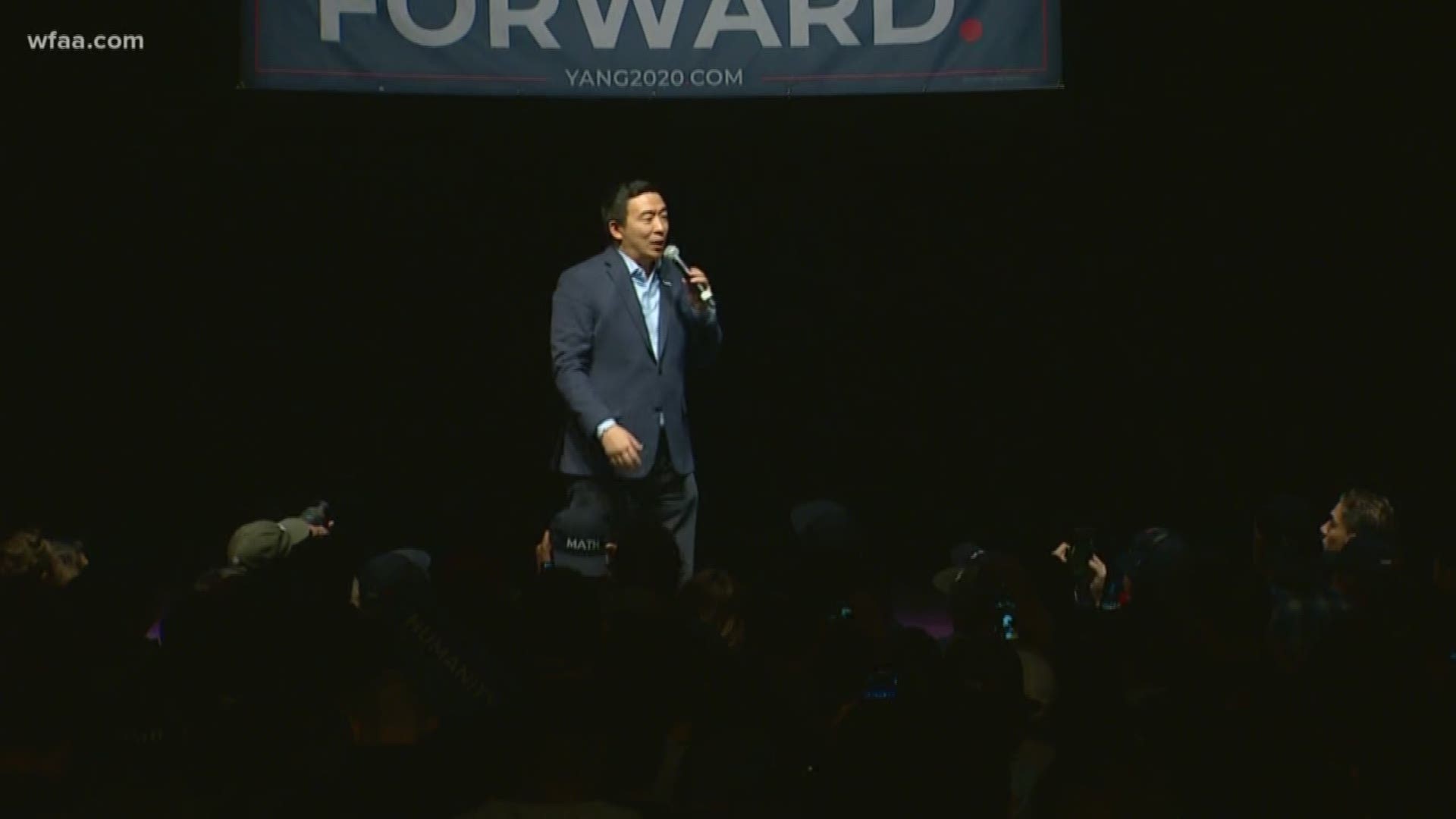 DALLAS — When Jimmy Carter won Texas in 1976, it was the last time a Democratic presidential candidate won the state.

But don’t tell Andrew Yang or his supporters that.

“I don’t think Texas is going to be red for much longer,” said Phillip Woods of Fort Worth. “Where I’m from in Fort Worth, I’d really say it’s purple.”

“I think we can shock the world here in Texas – what do you think?” Yang asked the crowd.

“It’s going to be a different experience in Texas,” he said. “You’re not accustomed to choosing the president of the United States, but in 2020 you’re going to get a chance to do just that.”

Presidential candidates are paying more attention than usual to the state of Texas. Michael Bloomberg will be in Plano on Saturday to speak to the Texas Democratic Party’s executive committee.

Even President Donald Trump has visited Texas seven times in the last year, signaling the state might not be a slam dunk as it used to be for Republicans.

But during an October visit to Dallas, Trump said Democrats will not take Texas from him.

“Texas is not in play,” he said during a speech at the American Airlines Center that drew 18,000 people.

RELATED: Will Texas be a battleground state in 2020?

But the Democratic candidates wouldn’t be visiting if their campaigns didn’t see an opportunity, particularly among people who have never dabbled in politics before.

“This is my first political event,” said Linda Zheng of Frisco, who attended Yang's Friday night rally with her fiancé. “I wasn’t interested in politics, so it’s very unlike me to come to one of these. But I’m excited for Andrew.”

Hai Bin Du of Carrolton said it was his first-ever political rally, too.

“I do support Andrew Yang, but not only because he’s Asian,” said Du. “He’s a visionary. A lot of his strategies and policies I agree with.”

“He has the future of my generation in mind, not just the current state of our country. That’s why I support him,” Amber said.

But Yang’s policies, like a universal basic income and Medicare for all, are a tough sell to many Americans, even Democrats.

“The dividend is going to be a way to re-balance the 21st-century economy and re-write the rules to work for us,” he said, adding that Alaska – a state that is just as reliably red as Texas – has had a similar program using oil money.

“We can do that for the entire country with technology money, and that’s where I’m going to lead us as president,” he said.

Yang is lagging in the polls and has not yet qualified for the next debate, but his supporters – known as the “Yang Gang” - say no one should count him out.

“If there’s something you want you have to keep chasing it, even if the odds are not the greatest,” Amber Du said. “But I believe in him.”