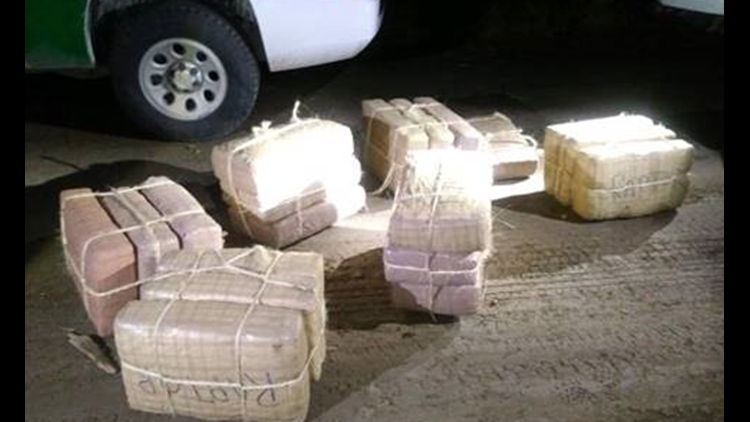 EDINBURG, Texas — On Friday morning, Brownsville agents on patrol observed several shoeprints on a border road just north of the Rio Grande. Agents followed the shoe prints and they encountered several bundles of marijuana and three suspected drug smugglers in a nearby neighborhood. The marijuana weighed more than 148 pounds, worth an estimated $118K. Border Patrol processed the subjects accordingly.

The Drug Enforcement Administration took custody of the narcotics.

Later that day, McAllen agents received information of suspected drug smuggling activities in Havana, Texas. As agents responded, they observed a silver Nissan traveling north of the Rio Grande. The agents conducted a vehicle stop and, while talking to the driver and passenger, the agents noticed several bundles of marijuana in plain view.

The agents immediately placed both subjects under arrest. Further inspection of the vehicle led to the discovery of a shotgun located in the trunk underneath several bundles of marijuana. The marijuana weighed 235 pounds and worth an estimated $188K.

On Saturday, agents working at the Falfurrias checkpoint referred a bus for secondary inspection after a Border Patrol K-9 alerted to it. During the secondary inspection, a search of the bus led to the discovery of more than nine pounds of cocaine, worth more than $299K, underneath a seat.

Border Patrol turned the narcotics over to the Brooks County Sheriff’s Office.

The following evening, Rio Grande City agents working near Escobares, Texas, observed multiple drug smugglers walking north of the Rio Grande. As agents attempted to arrest them, the smugglers abandoned the drugs and fled into Mexico. Agents seized more than 155 pounds of marijuana worth an estimated $124K.

The public is encouraged to take a stand against crime in their communities and report suspicious activity at 800-863-9382.

Please visit www.cbp.gov to view additional news releases and other information pertaining to Customs and Border Protection. Follow us on Twitter at @CBPRGV.