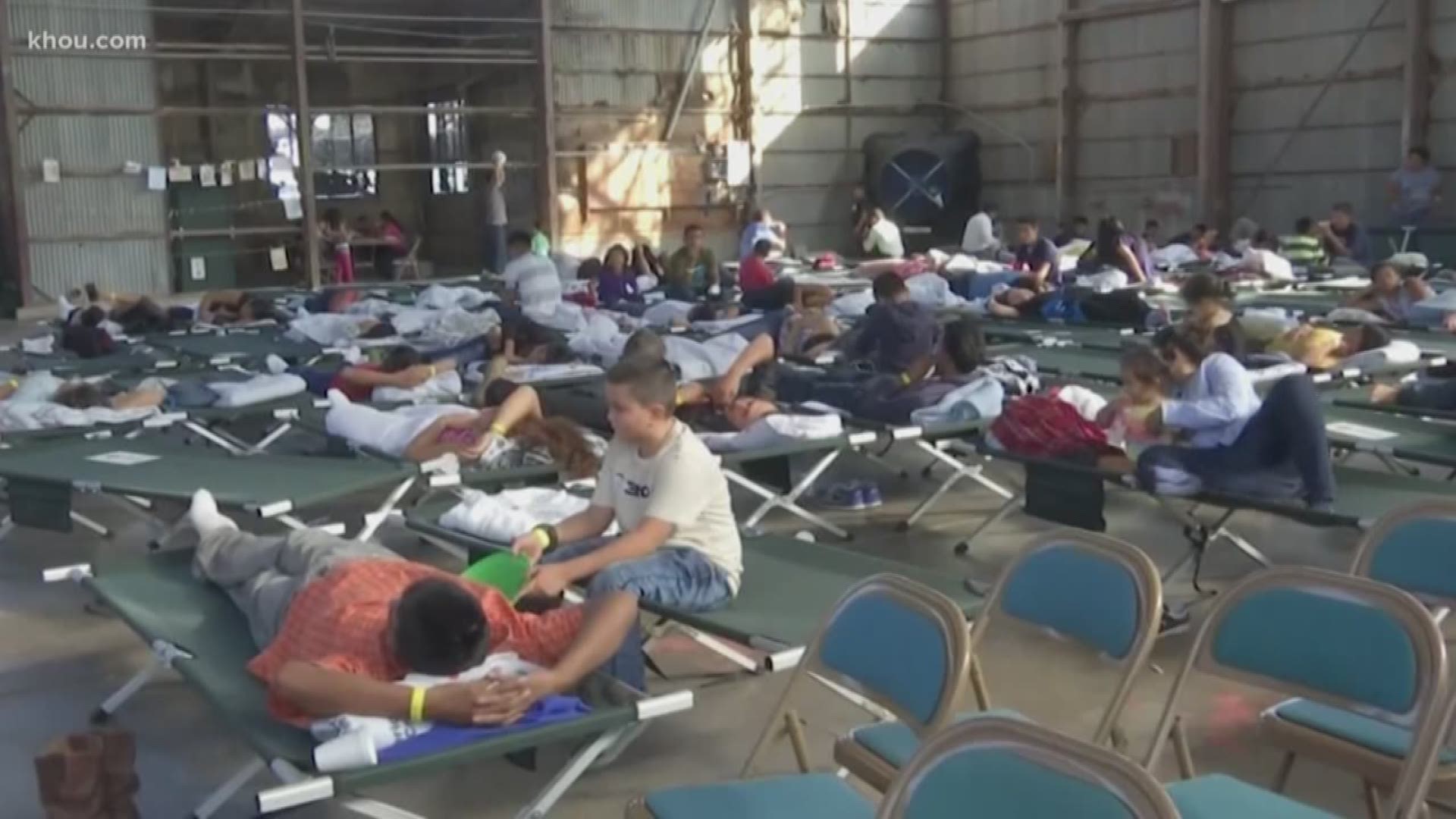 EL PASO, Texas — At night, the teenage girl from Honduras wraps a thin foil blanket around herself and her infant son as they lie on a floor mat in the cold. The lights are glaring and sleepless children are crying. It's so crowded inside the caged area that there isn't space for her baby boy to crawl.

This is the 17-year-old's account, one of dozens filed in federal court this week by advocates for children locked away in the immigration system.

Every five days, she is given a shower and can brush her teeth. Her baby boy already had a fever and cough but she didn't dare ask to see a doctor, for fear it would prolong their detention at the Ursula facility in McAllen, Texas. She said she has been there nearly three weeks.

"He feels frozen to the touch," the girl said. "We are all so sad to be held in a place like this."

Her declaration was filed with a court in Los Angeles that oversees a long-standing settlement agreement over custody conditions for migrant children caught crossing the U.S.-Mexico border. Teens and children, detained days or weeks by U.S. border authorities, described frigid cells where flu-stricken youngsters in dirty clothes ran fevers, vomited and cried with no idea when they would be getting out.

Some of the children traveled alone to the U.S. Others traveled with siblings or other relatives and were separated because the government only allows them to stay with parents or legal guardians.

Doctors and lawyers encountered several teen mothers at the detention facilities — some with newborn babies in a fragile state. Five infants were admitted to a neonatal intensive care unit at a local hospital after a doctor visited the McAllen facility, according to the court documents.

Advocates are seeking an emergency order to require immediate inspections of the Texas facilities, access for doctors and the prompt release of children to parents or other close relatives in the United States.

A spokesman for U.S. Customs and Border Protection declined to comment on the litigation.

The advocates have pressed the U.S. government for years to comply with the 1997 settlement agreement that set minimum standards for the detention of child migrants and the process for their release. A judge previously found the government kept children detained too long and in harsh conditions, and ordered an independent monitor to report on facilities.

The Trump administration is facing growing backlash over its handling of a surge in immigrant families and children at the border, many fleeing gang and domestic violence in Central America. Five children have died since late last year after being detained and lawyers who visited a Border Patrol station near El Paso last week described children being held in squalid conditions with little care and inadequate food, water and sanitation.

In a court declaration, Dr. Dolly Lucio Sevier, a pediatrician who visited the McAllen center earlier this month, said she saw many teenage mothers and parents unable to wash baby bottles or get enough water to drink to adequately breastfeed their babies. With its cold temperatures and bright lights, she compared the center to a torture facility.

"It is obvious that the dignity and well-being of children is not even an afterthought in the design of the center," Sevier said.

At another Customs and Border Protection center in Clint, Texas, children said no adults took care of them, so they tended to each other. They said they were always hungry, the water tasted horrible and there was no soap or water to wash their hands after using the bathroom. The flu was widespread and children who got sick were sent to a special cell.

A 12-year-old girl from Ecuador said she was being held there with her 8- and 4-year-old sisters after they were separated from their grandmother. The guards told the girls it could take as long as two weeks for them to be reunited with their mother in Massachusetts.

"Every night my sisters keep asking me, 'When will our mommy come get us?'" she said in her declaration. "I don't know what to tell them. It's very hard for all of us to be here."

The children are not named in the declarations provided to the court. Attorneys interviewed the children over the past few weeks as part of monitoring under the settlement.

U.S. agencies have been scrambling to find adequate facilities for migrants streaming across the border with Mexico, and the Border Patrol has been detaining some children for weeks as opposed to 72 hours, because the U.S. Department Health and Human Services said it doesn't have the capacity to take them.

Advocates have complained the department has delayed releasing children to sponsors who are willing to care for them in the United States and take them to immigration court hearings to determine whether they can stay in the country. They said that's why kids are being kept in crowded border facilities for too long.

In court filings, doctors said the filthy conditions lead to the spread of flu and other disease and show a lack of respect for the children's humanity. Peter Schey, president of the Center for Human Rights and Constitutional Law, said the children's deaths might have been prevented had the government promptly released them from custody.

Warren Binford, an attorney who visited the Clint facility, said the Border Patrol lied about giving a shower to a 4-year-old girl who was extremely dirty and whose hair was so matted she thought it might have to be cut off. Two 7- and 8-year-olds who were caring for the younger child did their best to convince her, she said, but the girl, who was nonverbal, refused a shower after the attorney instructed agents to give her one.

A 14-year-old Guatemalan girl said she fled with her sister, mother and niece to the United States because her father was abusive. She said she wasn't allowed to shower for five days and was denied a toothbrush. Guards yelled at her, she said, when she tried to go to the bathroom.

"The food here is not enough," she said. "The food is not good, and I feel hungry."