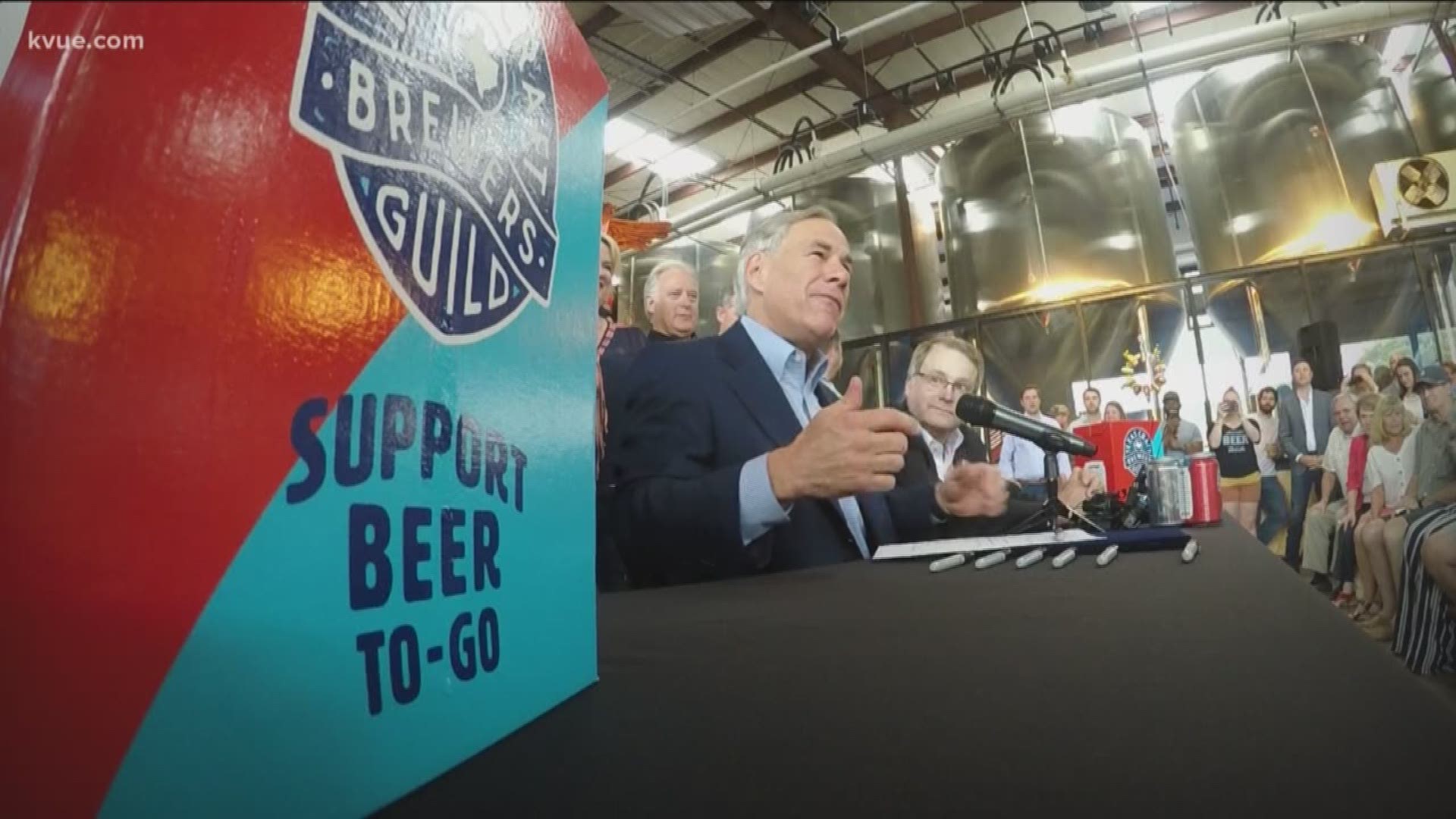 Wineries have been able to sell to customers for years but not breweries; that's why lawmakers say this bill is the most significant modernization of the alcohol beverage code since 1935.

The House Bill 1545 was signed into law by Abbott at Austin Beer Works Brewery surrounded by beer enthusiasts.

"How are you going to celebrate this day?" asked KVUE.

"How else? By drinking some beers," said Eddie Barreda, who is an avid beer drinker.

Many people like Barreda can finally buy beer directly from breweries.

House Bill 1545 will allow craft breweries to sell beer to-go in Texas. They can only sell up to one case per person per day.

"Nothing good happens after midnight, so you go straight home, drink a beer and you're fine," Barreda said.

The new law also allows new businesses to easily open up by reducing burdensome regulations on the beer and wine industry.

"It allows manufacturers and distributors to get into the business more easily with minimum of government oversight and paperwork," said Chris Porter spokesperson for the Texas Alcoholic Beverage Commission, known as TABC.

TABC is a Texas public agency responsible for regulating, inspecting and taxing the production, sale and use of alcoholic beverages within the state.

"It's time for us to belly up on the table and serve a nice tall glass of freedom," said Abbott moments before signing the bill.

The new law also extends the work of the TABC for an additional 12 years.

"There's a number of modernizations to the Alcohol and Beverage Code that have been around since 1935," said Porter.

The Texas Senate passed HB 1545 back in May with the "beer-to-go" amendment intact. That vote came after trade associations representing Texas craft brewers, distributors and wholesalers had reached an agreement that will allow consumers to purchase one case of beer to-go per day, rather than the two allowed under the original stakeholder agreement between craft brewers and distributors.

HB 1545 will allow Texas breweries to sell packaged beer to customers from the brewery and test out certain beers before sending them out to wholesalers.

"Beer to-go is one of the most widely popular policies that the Texas Legislature has ever seen, but the journey that it took to get here was difficult and uncertain," Rep. Rodriguez said. "Beer to-go's passage is a huge win for Texas small businesses and consumers over politically powerful special interest groups. It's not every day that the underdog scores a victory here in the State Capitol."

"Today's signing is a major win for the freedom and economic prosperity for which Texas has become known," Abbott said. "It is no secret that the Lone Star State is one of the best states for business and entrepreneurship, and House Bill 1545 plays an important role in maintaining this by ensuring our beverage industry is free of stifling regulations. I am grateful to the legislators and stakeholders here today who played a vital role in getting this legislation to my desk."

While taking a large sip of beer, Barrera said it was a step forward for the Texas alcohol laws.

"Here's a toast to freedom itself in the Lone Star State," said Abbott, as dozens of people gathered for a toast to Texas lawmakers.

The State of Texas is the last state to allow beer-to-go sells. The law goes into effect on September 1.