VERIFY: Can senators remove Mitch McConnell to reopen the government?

In order for the shutdown to end, McConnell must introduce a bill to the floor for senators to vote. But that hasn't happened yet. 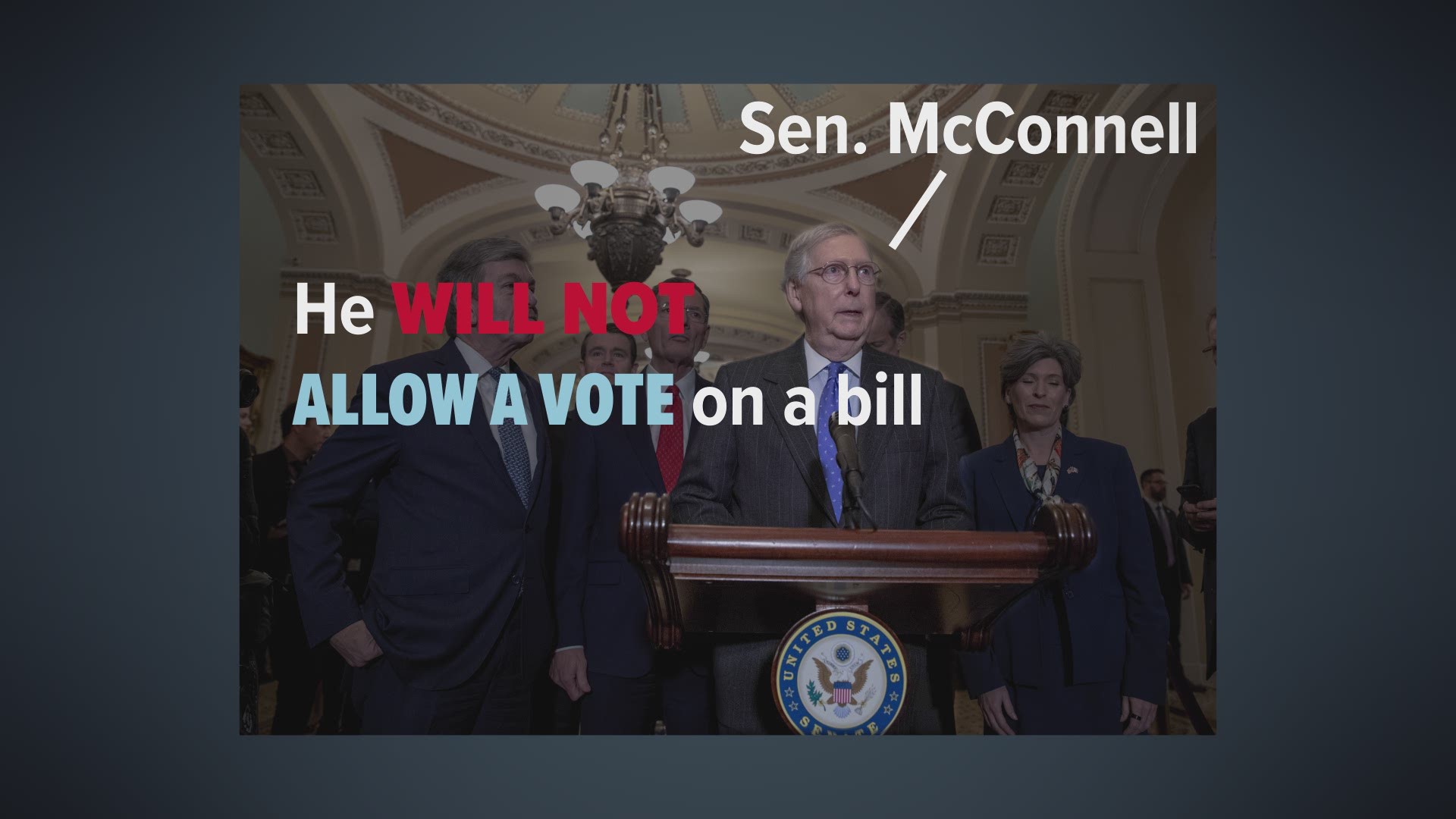 For the government shutdown to end, Senate Majority Leader Mitch McConnell needs to introduce a bill to the floor and let senators vote on it. But he’s refusing to make that first step.

McConnell says that introducing a bill to the floor that does not include funding for a border wall will never be signed by President Donald Trump, so he argues there’s no point in even trying.

It has some viewers asking, “What can be done to go around Mitch McConnell?”

Can a bill make it through the Senate if the majority leader opposes it? Can a Senate majority or minority leader be replaced? Has it ever happened before?

Simply put, a majority leader can’t be forced to allow a vote. They can technically be removed from their position, but it’s never happened before and would require the party to vote out their own representative.

We’ve previously VERIFIED that Congress can pass legislation without the consent of the president.

Even a presidential veto can be overruled by a two-thirds vote in both the House of Representatives and the Senate.

But McConnell’s choice not to hear or vote on any bills that would reopen the government effectively shuts down any of those options.

Unlike the president, vice president and house speaker, the majority and minority leaders in the Senate are not positions in the U.S. Constitution.

According to the Senate’s own website, the positions of majority and minority leader weren’t created until 1920 (Democrats) and 1925 (Republicans).

The leaders are elected at the beginning of each Congress by members of their own party to represent them on the Senate floor.

Both positions have benefits. The majority leader “has come to speak for the Senate as an institution.” They schedule daily business on the floor and works with the minority leader to establish floor debate and structure.

The majority leader is also granted the right to speak first on any topic that multiple senators wish to speak about. The minority leader also gets to speak before other senators outside the leadership.

But, again, none of these policies or procedures are written in law. They’re written and approved by senators and kept in the Senate rules and guidelines.

The same party members that voted the majority and minority leaders into office could decide to vote that person out of the position.

It’s important to note that this has never happened before. The only times a majority leader has been replaced during a congressional session were when the acting leader passed away while in office. At those times, the parties voted in a new representative.

So could Senator McConnell be replaced? Yes. But it would require his own party deciding to take action against him. If he were to be removed as majority leader, he would still maintain his full political position as a senator.