What records have been broken so far this hurricane season?

While this isn't the most active hurricane season on record yet, it's on pace to become it. 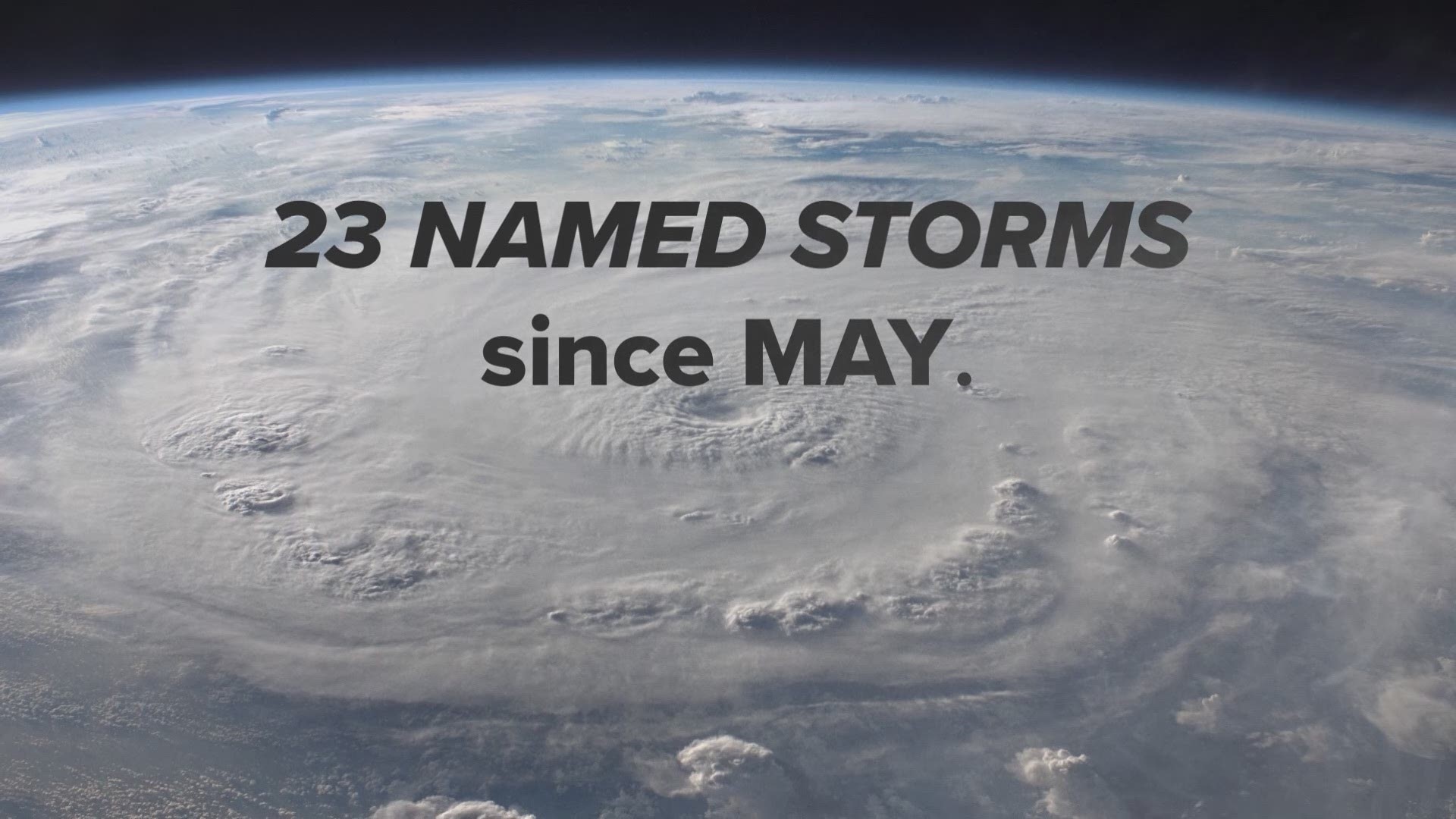 The 2020 Atlantic hurricane season has been busy to say the least. Sometimes it feels like every week there’s a new record people are saying has been broken.

But exactly what records has it broken? And what is it on pace for?

Currently, the 2020 Atlantic hurricane season is not the most active season on record for the Atlantic basin, but it’s on pace to be.

There was a total of 28 named storms during the 2005 season, the most on record. That was the first time forecasters ever had to reach into the Greek alphabet for storm names.

But at this point in the year in 2005, there had been just 17 named storms, according to the National Hurricane Center. There were seven more storms in October before activity trailed off toward the end of the year.

This year, Tropical storm Edouord became the earliest fifth named storm of a season and since then every storm to follow has been the earliest to that point, according to Colorado State University hurricane researcher Phil Klotzbach. So, while this season doesn’t have a record on total activity as of yet, it’s on its way to doing so if the pace continues.

The 2020 Atlantic season already tied a record in another measure of activity: United States landfalls.

Colorado State University Meteorologist Phil Klotzbach told VERIFY over email that there have been nine landfalls on the continental U.S. by named storms this year, tying a record set back in 1916.

However, this season isn’t flirting with every activity record. The most hurricane-strength storms in a season was 15 in 2005 and the most major hurricanes, that’s category three or stronger, was 8 in 1950. This season there have been just eight hurricane-strength storms and two major hurricanes, one of those being hurricane Teddy which weakened well below its peak strength by the time it made landfall in Canada earlier this week.

RELATED: VERIFY: What is ivermectin and what does FDA think about it as possible COVID-19 treatment?

This season, at least as of now, is also far from reaching any record damage numbers. While getting an exact measure of damage during an ongoing hurricane season is difficult, Steve Bowen, a meteorologist and head of catastrophe insight at Aon, said in an email the combined damage total for 2020 is “likely to approach $25 billion.” He said the highest modern year seasons for the continental U.S. were in 2005 when the damage was $217 billion and in 2017 when the damage was $172 billion. He says this season is currently above the long-term average dating back to 1980 of $22 billion but below the 10-year average of $34 billion.

Nonetheless, he stressed that this season is still ongoing meaning the danger of more storms with life-threatening force and destructive powers is still present and this data only accounts for damage in the continental United States and disregards the potential damage in the Caribbean.

NOAA's numbers on damage are different from Bowen's, but they still list 2005 as the record year for damage caused by tropical cyclones. The agency doesn't have a live estimate of damage totals for this year.

One record that can’t be accounted for yet is fatalities caused by hurricanes this season. NOAA doesn’t release that information until the hurricane season ends. Its records show American deaths caused by an Atlantic hurricane season have topped 1,000 only four times: in 1900 when it was anywhere between 8,000 and 12,000; and in 1893, 1928 and 2005.

So yes, this Atlantic hurricane season is active and even record-tying and record-breaking in some aspects. But the season would need to continue its active pace to break some records and is fortunately unlikely to touch several others.