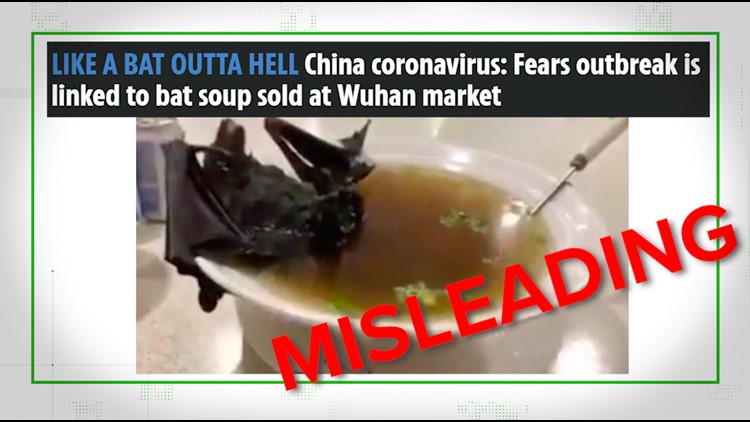 VERIFY: The source of the coronavirus isn't confirmed yet

New information continues to come in about the new strain of coronavirus from China, but there’s almost no information about the actual source of it.

Health officials believe the virus may have come from an animal, but they haven’t said which, where it happened, or how a virus managed to leap to a human. So, people have started to try to fill in the gaps.

One culprit some are pointing to is bat soup, often putting the claim by a video or photo of a bat in a bowl of broth. The original video has been viewed nearly four million times.

However, there is little evidence to suggest this specifically is the source. In fact, there’s not much evidence suggesting any one particular source besides a live animal market.

Did the current coronavirus outbreak spread to humans from bat soup?

Scientists currently don’t know where it spread from. Bats are a possibility, but so are other animals. Scientists don’t even have definitive sources from previous coronavirus outbreaks, such as SARS, meaning it could take some time to pin down the source for this one.

According to the World Health Organization’s most recent situation report from January 23, the initial source of the virus still remains unknown. However, the WHO states similar viruses and current evidence suggests the virus may have zoonotic transmission. That means it originated in animals and transferred to people.

Both the Centers for Disease Control and Prevention and the WHO have stated there was a link between many of the initial victims of the virus and a large seafood and live animal market in the city of Wuhan. In the WHO’s most recent situation report, they said in the last week only 15% of patients have visited the market indicating that it is now spreading human-to-human. In the WHO’s meeting regarding the virus, they listed finding the source as one of their priorities.

That’s currently all the information the WHO and CDC have on the direct source for this specific virus, but they do have information on the general coronavirus family, which is large and common in many different animal species including camels, cattle, cats and bats.

The WHO says SARS came from an animal reservoir--"perhaps bats"--that spread to other animals, specifically civet cats. Scientists have been researching the origins of the SARS coronavirus as recently as 2017.

Both the WHO and the CDC have referenced camels as a potential source for MERS, however both say more research is needed to figure out the role camels and other animals have in transmitting the disease.

A group of Chinese researchers believe the current coronavirus outbreak is a combination of bat coronavirus and snake, with the transmission to humans coming from snakes. They determined this through comparing protein codes.

Their research is not definitive and more research will be needed before global health organizations confirm the source.

So ultimately, no one definitively knows the true source of the new coronavirus. It’s possible it came from bats and was transmitted to humans eating bat soup. It could also have come from a number of other animal sources.

The market that is believed to be the source of the disease was closed by local authorities on January 1.