WARNING: The content of this video may be offensive for some and very hard to watch. Parts of the video are transcribed in this article. 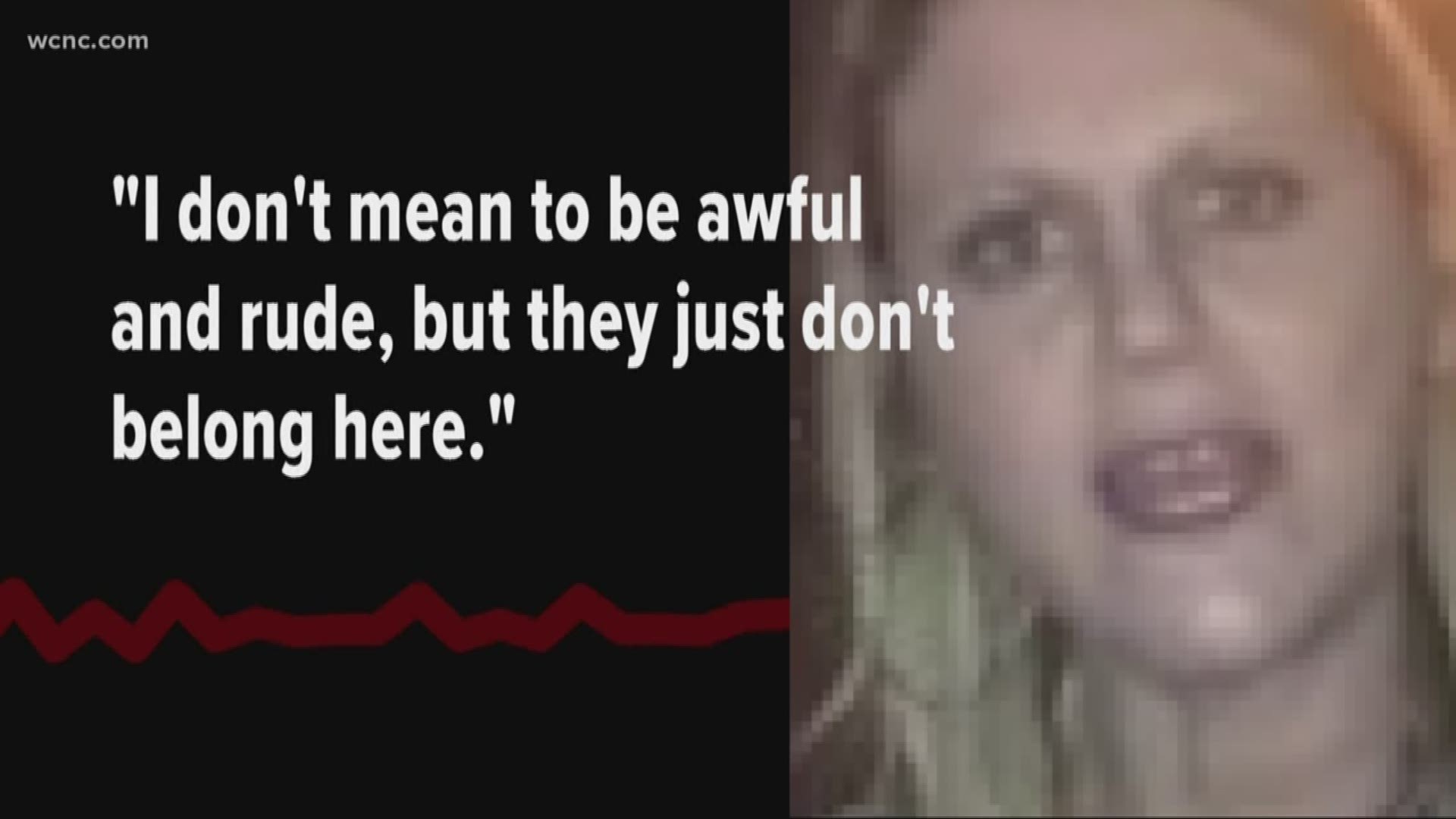 CHARLOTTE, N.C. — A warrant has been issued for a white woman shown in a video confronting two black women and making racial comments in Charlotte.

This video has now been shared more than 24,000 times on Facebook. It was taken Oct. 19 in the parking lot of a South Park apartment complex called Camden Fairview, where all three women said they reside.

According to the police report, a woman said she was physically assaulted and threatened with bodily injury by the suspect, Susan Westwood.

On October 30, police issued a misdemeanor warrant for misuse of the 911 system against Westwood, but as of 5 p.m. on October 31, officers had not found her. Police said she falsely claimed people near her home were trying to break into nearby residences.

Charlotte-Mecklenburg Police released the five-minute 911 call on Wednesday. In it, Westwood told the dispatcher there were people she'd never seen before who were African-American trying to get into the apartment complex where she lived.

"They've just made feel intimidated and awful, so whatever you need to do and charge me back, just do it, because they don't belong here," she told the dispatcher. "I don't mean to be awful and rude, but they just don't belong here."

Westwood said the people were hanging out there and filming her. She called it strange and weird and said they were trying to cause problems and begging for money.

"I'm not going to stand for it," she said. "I send my kids to Myers Park High School."

Charlotte Mayor Vi Lyles commended the police department for its response via Twitter.

"The ugly sentiment expressed in a 911 call released today (Wednesday) doesn't reflect our city's values, that everyone is deserving of respect and dignity," the mayor said.

"What are we gonna talk about tonight?" Westwood asks in the video. "Being hot, being beautiful, being white?"

Leisa and Mary Garris said they were waiting on AAA when they said Westwood began harassing them. They said the verbal exchange continued as the woman used foul language and made disparaging remarks.

Despite Leisa and Mary's attempts to stop the interaction, they said Westwood continued.

Westwood is also heard in one of the videos asking if she needs to bring out her concealed weapon. The two sisters say they called the police, feeling threatened by the woman's comments.

"We are so distraught and still very upset about what has taken place only because of the color of our skin," Mary said.

The sisters said they hope the videos bring awareness to the racism that still exists in Charlotte.

"It is so upsetting to know that today we still have this overt racism that is going on in 2018," Mary said.

In an email statement from Spectrum Cable, Patrick Paterno, a director of public relations with Charter Communications, identified the woman in the video as Westwood, a now former employee.

The statement read: "The incident recorded in Charlotte is a blatant violation of Charter's code of conduct and clearly disregards the company's commitment to inclusion and respectful behavior. As such, Ms. Westwood's employment with the company has been terminated, effective immediately."

Camden Property Trust could not comment on the status of Westwood’s lease or residence at the Camden Fairview apartment complex.

According to a statement from the company, “Camden does not condone this type of behavior, and we take this matter very seriously. We are working with our attorneys and taking the steps required by law.”

Anyone with information about Westwood's whereabouts should call Crime Stoppers at (704) 334-1600.