Ray High School has multiple positive cases of the virus in the program, according to Coach Craig Charlton. 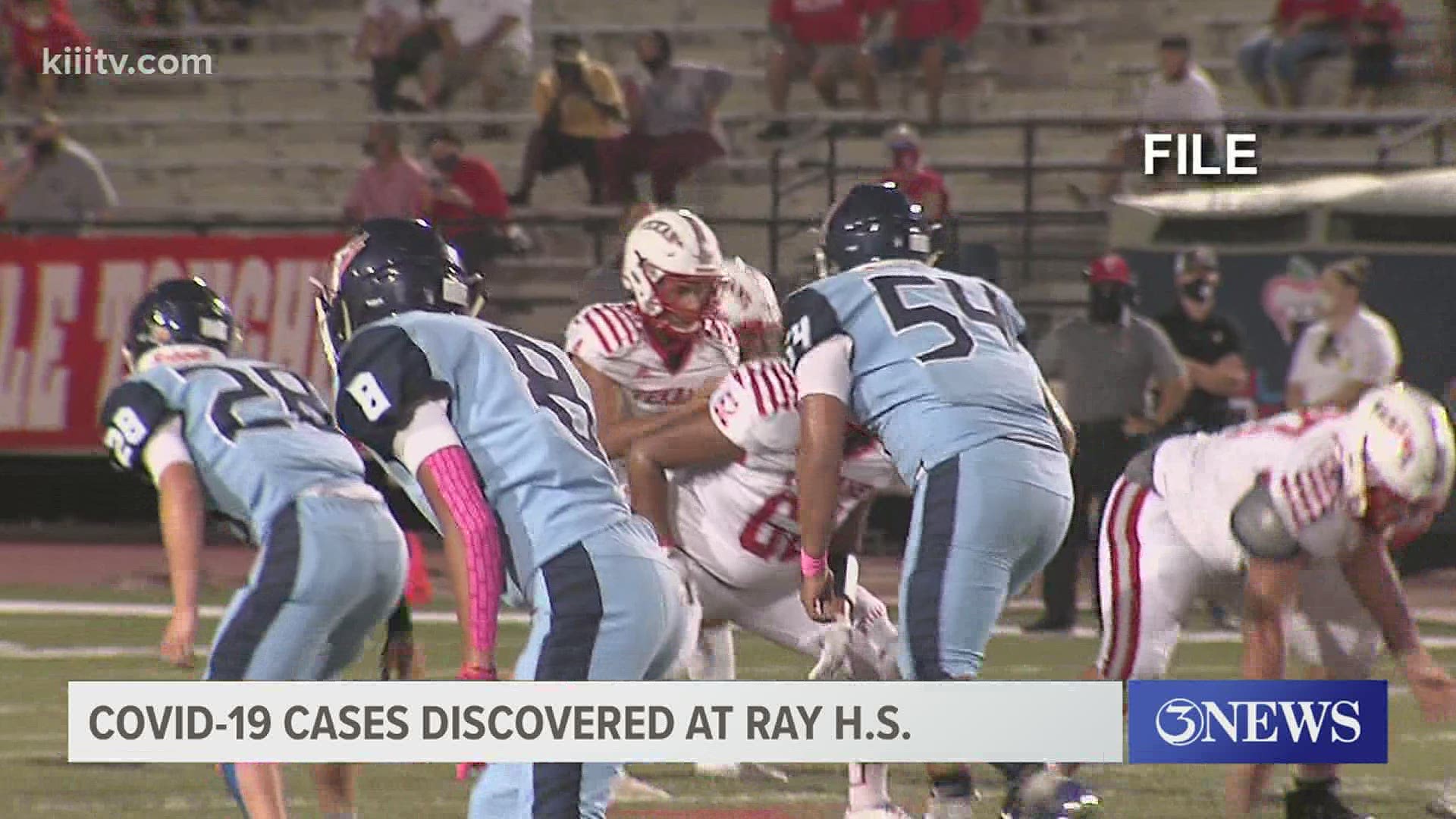 CORPUS CHRISTI, Texas — W.B. Ray High School and Veterans Memorial High School will not be facing off on the gridiron Friday due to multiple positive COVID-19 cases, according to Ray High School Coach Craig Charlton.

The district worked in an open week in December to try and make-up any postponed games. If Ray can't play next week against Flour Bluff, an alternate schedule five-day will likely be put into place.

According to the Corpus Christi Independent School District website, there are 9 students at Ray High School who have tested positive for the virus. It is not clear how many of those 9 students are on the football team or otherwise involved with the football program.

"Ray High School’s athletics areas will be closed Friday for deep-cleaning. When practice resumes Monday, all football participants (who, like all students and staff, are responsible for self-screening prior to the school day) will be screened prior to being admitted to practice," stated a spokesperson for the district.

The district says they have conducted contact tracing and notified anyone determined to have been in close contact.

The district also saying Friday’s school day and all other extra-curricular activities will continue as scheduled.

The District tracks cases of the virus in its schools here.

“In general, keep in mind the cases chart lists cumulative numbers and includes those on campus as well as remote," stated a spokesperson with the district.

This reporting tool is similar to ones being used by other school districts around the state. CCISD's COVID-19 Tracker is showing cases confirmed on campus and off-campus.

While the district does have a plan, the CCISD website does not disclose this:

It's best to make sure your contact information is up to date with the district. CCISD said they will also send out a letter to parents to let them know about a positive test result reported on their child's campus.

News of the cases at Ray High School comes just one day after all schools and all sports within the Alice Independent School District had to be suspended due to the virus.

The Alice Independent School District is closing all schools and going back to virtual learning after several students tested positive for COVID-19, a letter to parents said. In-person instruction will be ending immediately through October 30.

The letter said that several students attended a "large residential gathering on Oct. 17" that may have led to the exposures, according to contact tracing.

Parents and students who may have been exposed are being notified by the district.

Students who tested positive, at both William Adams Middle School and Alice High School, were on campus as recently as Tuesday.

In-person learning at three Kingsville ISD schools as well as the Middle School Athletic Program have been suspended after Superintendent Dr. Cecilia “Cissy” Reynolds-Perez said there has been a "spike in COVID positive cases in our district."

Students from all schools except HM King will do remote learning while off-campus.

Parents were sent a robocall informing them that they may pick up their students early today from Memorial, Gillett, Harrel.

Students and staff from these three schools will return to campus on November 2, a note sent home to parents said.

As of this moment, Phase 3 Opening on October 26, will continue as planned at all other KISD campuses, Reynolds-Perez said.

All campuses will be sprayed and disinfected.