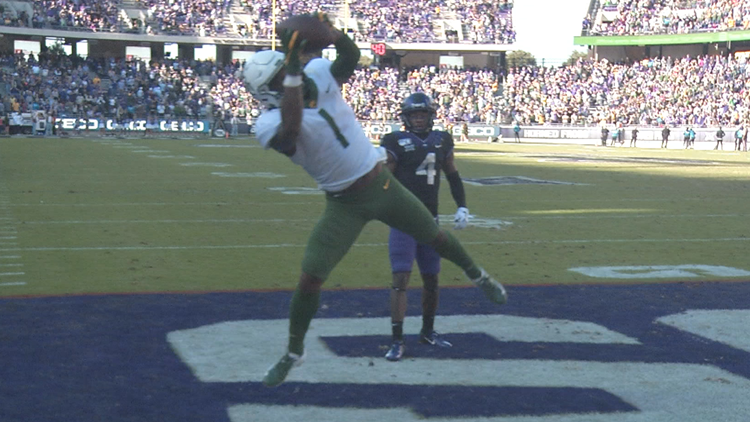 Photo by: Kurtis Quillin/KCEN
Baylor CB Grayland Arnold (1) intercepts a 4th-down pass from TCU QB Max Duggan during the 3rd overtime period to clinch the win for No. 12 Baylor. The Bears beat TCU 29-23 to improve to 9-0.

WACO, Texas — The Baylor Bears will play one more game on center stage in college football this season.

The Bears are ranked No. 7 in the final College Football Playoff rankings and will face No. 5 Georgia in the Allstate Sugar Bowl.

The game is scheduled for Jan. 1 at 7:45 p.m. It will be at the Mercedes-Benz SuperDome in New Orleans.

This will mark the Bears' first appearance in the Sugar Bowl since 1957, a Bear win over Tennessee. It will also be Baylor's third trip to a BCS/New Year's 6 Bowl Game (2013 Fiesta Bowl, 2014 Cotton Bowl) and its first under Matt Rhule.

At 11-2, Baylor could set a school record for single-season wins with a win over the Bulldogs.

This will be the 15th Sugar Bowl between current members of the Big 12 and SEC.

Baylor became the first Power 5-conference team to go from 1-11 to 11-1 within two year.

The Bears lost to No. 4 Oklahoma in the Dr. Pepper Big 12 Championship Game 30-23 in OT on Saturday.