The IceRays 3-2 win in overtime forces game 5 with the Mudbugs. 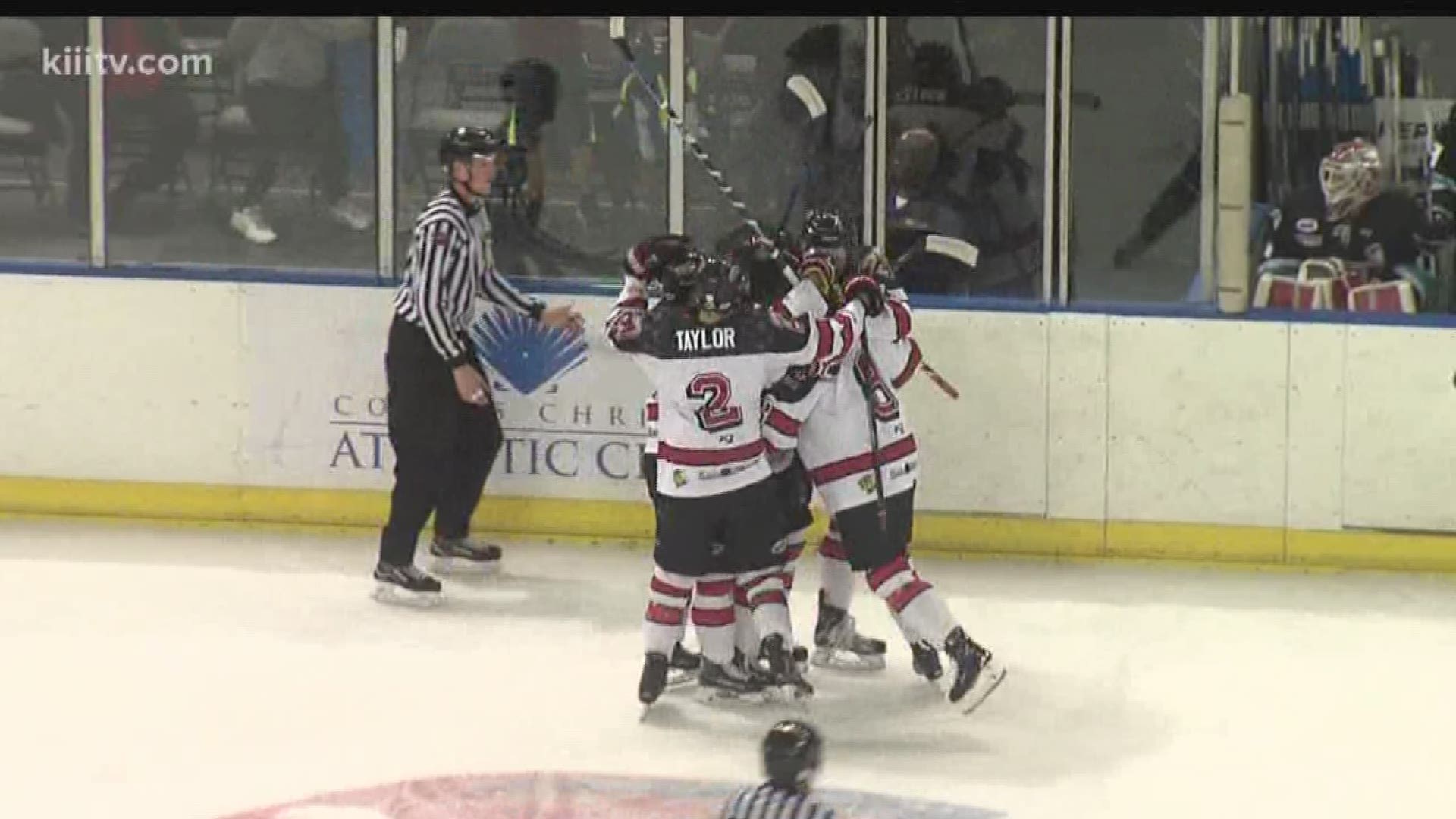 CORPUS CHRISTI (CC IceRays) — In what would be their last home game until next season, the IceRays displayed extraordinary heart and spirit in a dramatic come-from-behind 3-2 overtime win on Friday night to force a Game Five in the South Division Semi-Finals.

Shreveport was better-prepared on Friday night than they were on Thursday, moving their feet and threatening much more frequently in the first period. Eventually, Angus Scott went to the penalty box for high-sticking.

Cole Quisenberry, who opened the scoring in Game One, fired a shot from the bottom of the right circle at 10:50, beating Chad Veltri low-blocker side to draw first blood and give the Mudbugs their first lead of the weekend.

Just a minute and eleven seconds later, the Rays had an answer. Rylee St. Onge, who was the First Star of the Game on Thursday night, raced down the left wing and ripped a heavy wrist shot on goal, forcing Gustavs Grigals to react quickly and punch the puck aside. It bounced right to Adam Kadlec at the top of the right circle. The red-hot center rifled it into an open net to tie the game.

The Mudbugs went to work in the second period, controlling the puck for long surges in the offensive zone and keeping the IceRays’ scoring chances at a minimum. About halfway through regulation, Gueorgui Feduolov found an opening.

Jake Transit flung a pass to Feduolov at the top of the right circle. With plenty of time, he wound up and fired a hard slap shot to beat Veltri inside the right post past the glove to regain Shreveport’s lead.

Chances remained few and far between for the Rays in period three, but they forced a handful of difficult saves for Grigals. Ryan Rosenberg unleashed a one-timer from the left point, which led to a rebound that Grigals managed to cover. He also denied a point-blank shot from Garrett Hallford, who had the puck go on edge at the last moment.

With time winding down and Veltri pulled from the game for a sixth attacker, Larry Jungwirth tapped the puck down the Brendan Miller at the edge of the crease. The IceRays’ Captain spun and fired a no-look shot inside the near post, beating Grigals to tie the game and electrify the American Bank Center.

For the first time in the 2018 playoffs, the IceRays would head to overtime. Both sides exchanged minor scoring chances, but both parties were equally cautious during the sudden death stanza. However, 11:43 into extra time, lightning struck. Grayson Gavin had the puck bounce his way at the bottom of the left circle. He rifled it past Grigals, who couldn’t position himself until it was too late. Gavin’s goal secured a Game Five for the Rays, who will end the series on the road in Shreveport.

Veltri made 36 of a possible 38 saves in net, earning back-to-back playoff wins. Grigals denied 24 of 27, dropping his first playoff game as a Mudbug. A series-deciding Game Five will take place at George’s Pond Coliseum in Shreveport on Sunday, April 22nd. The winner will advance to the South Division Finals to play the Lone Star Brahmas.