Returning to action after a 12-day break, the IceRays had a strong start but later fell into penalty trouble and dropped a close 4-3 decision to the Lone Star Brahmas on Thursday night. 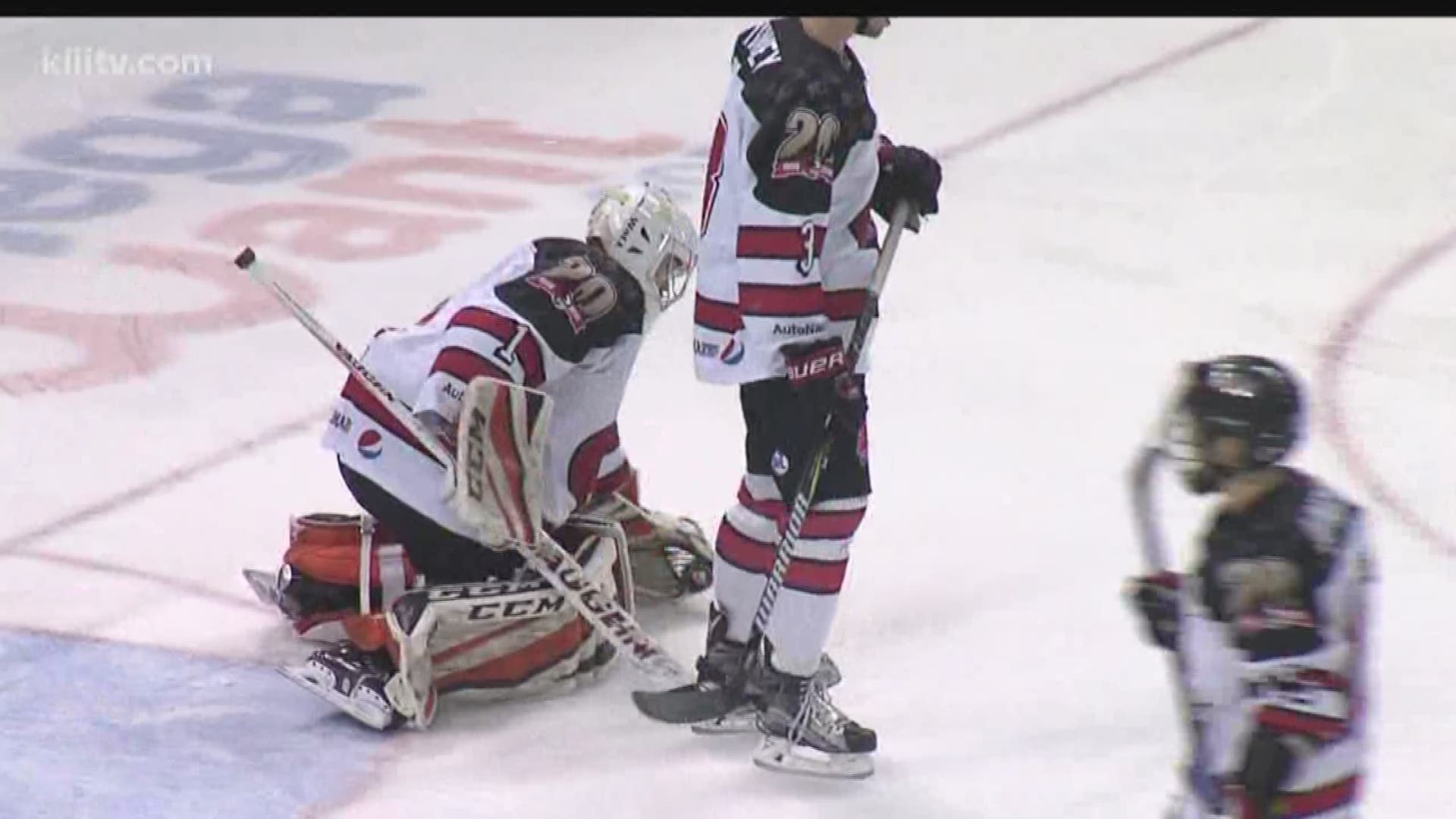 Returning to action after a 12-day break, the IceRays had a strong start but later fell into penalty trouble and dropped a close 4-3 decision to the Lone Star Brahmas on Thursday night.

The IceRays knew they needed a stronger start to the series than they’d had in the previous two. They did just that. Despite being outshot 15-8 in the opening frame, the Rays drew first blood.

At 6:26, Blake Coffey backpedaled into the deep slot with the puck in the offensive zone. He wound up and unleashed a cannon of a slap shot from the blue line, and beat Mitchell Gibson cleanly through the screen to give Corpus Christi a 1-0 lead.

Ryan Rosenberg was penalized for checking from behind halfway through the opening stanza, but the IceRays fought off the ensuing Lone Star power play. Garrett Hallford stepped in to assume CJ Regula’s old role as the top center on IceRays penalty kills, and battled hard alongside Brendan Miller, Conor Yawney and Matt Acciaioli to alleviate the pressure. Jake Acton was a perfect 15 of 15 in goal during the first period to help the Rays maintain their 1-0 lead.

Quickly into the second, Lone Star turned up the heat. While shorthanded, the defenseman Kyle Hallbauer rushed the puck down the right wing and fired a well-timed shot off Acton. It ricocheted off the goaltender’s stick, off Julian Biondo, and into the net to tie the game.

Just two minutes later, Jon Russell scored his NAHL-leading 25th goal of the season. On a Brahmas power play, Hallbauer kept the puck in the zone just barely which led to an odd-man situation down low. Steven Ipri fed Ture Linden, who cycled one last pass to Russell for a tap-in goal.

Corpus Christi responded with a power play goal of their own just before the halfway point of regulation. Only 20 seconds into their man-advantage, Acciaioli gave Jayson Dimizio a crisp pass from the right circle into the low slot. Dimizio tapped the puck past Gibson for his sixth goal of the season to re-tie the game.

Things were looking good for the Rays to start the third period. Just 33 seconds in, Larry Jungwirth won possession of the puck behind the opposing net, and centered a pass for Miller who tucked home his 11th goal of the season.

Three minutes later, however, Ipri redirected a Hallbauer point shot just four seconds into a Brahmas power play. Lone Star would tack on a third power play goal at 51:28, after Ryan Rosenberg was given a five-minute major and game misconduct for slew-footing. Linden gave Hallbauer a circle-to-circle pass, and the defenseman buried the shot for his third point on the evening.

The Rays made a late push on a 4-on-3 power play and an offensive zone surge, but they could not solve Gibson a fourth time. He held on for his 17th victory of the season, stopping 22 of 25 Corpus Christi shots. Acton had a strong game in net, especially at the start, but was charged with his fifth regulation defeat after stopping 34 of 38. The IceRays will close out the series against Lone Star tomorrow night at the American Bank Center. Puck drops at 7:05 pm CT. The game will be broadcast on HockeyTV.com and on YouTube.