Texas A&M-Corpus Christi baseball completed a sweep of Central Arkansas on Saturday with a pair of wins. 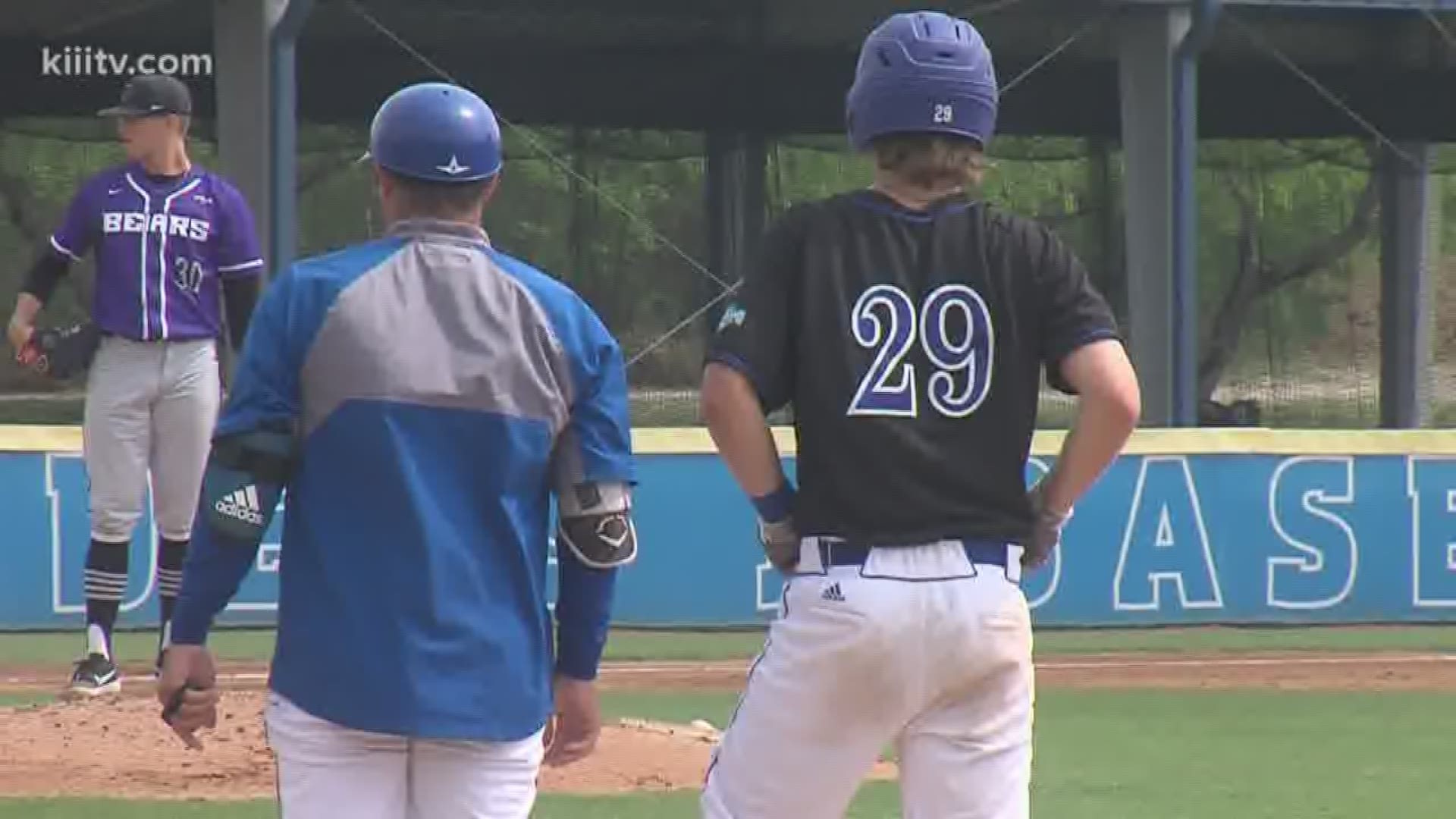 Game One Islander Statistics
- The Islanders rallied from three runs down to force extra innings, scoring three in the bottom of the eight.
- A&M-Corpus Christi tied a season-high with 18 hits (Feb. 18 vs. UT Arlington) including five extra base knocks.
- The Islanders scored nine runs on 18 hits with two errors while UCA had eight runs on 11 hits with no errors.
- Cody LeCompte got the win, throwing two innings of hitless relief. He allowed one walk and struck out one.
- Enrique Sanchez Jr. drove in four runs, going 3-for-4 with a walk, a run scored and a double.
- Justin Taylor went 3-for-4 with a double. he drove in a run and scored twice.
- Rivera-Chijin scored a pair of runs, going 3-for-4 with a double.
- Burts drove in a run and reached on a walk as he went 3-for-5 in game one.
- Mike Williams was 2-for-5 with a pair of runs scored. He also drove in a run.
- Joey Werner was 2-for-5 with a double.
- Tyler Mendoza was 1-for-5 with a run scored.
- Luke Marbach was 1-for-5 with a double.
- A.G. Ayala was called upon early and gave the Islanders 4.2 innings of relief. He allowed just one earned run on four hits. He struck out three and walked two.

Game One Islander Key Innings
- With one down in the second, Marbach doubled deep to right and came around to score on an Anderson single to right. After an out, Rivera-Chijin and Taylor hit back-to-back singles to score Anderson to tie the game, 2-2.
- Williams led off the fourth with an infield single and Mendoza moved him to second with a single of his own to right. After a Rivera-Chijin sacrifice bunt and an out, Sanchez Jr. drove a single up the middle to drive in a pair of runs.
- Taylor came up with a two-out double in the bottom of the sixth deep to left. Sanchez Jr. drove in his third run of the day with a single to center for A&M-Corpus Christi's fifth run of the game.
- In the eighth, Rivera-Chijin and Taylor hit back-to-back singles to put runners on the corners. A wild pitch allowed Rivera-Chijin to score and Taylor moved up to second. Sanchez Jr. drove in his fourth run on a single up the middle to make it 8-7. A Burts single put runners on the corners and prompted a pitching change. Anderson grounded out to short but it allowed Sanchez Jr. to come around to score the tying run.
- Rivera-Chijin again gave the Islanders a spark in the 10th with a leadoff double to right. After a groundout, Sanchez Jr. was intentionally walked, bringing up Burts. Burts took the first pitch he saw out to right for a game-winning single as Rivera-Chijin slid into home safely.

Game Two Islander Key Statistics
- The Islanders scored three in the first, one in the second, one in the seventh and two in the ninth. A&M-Corpus Christi had seven runs on nine hits with one error.
- UCA got a run in the first, one in the fourth, two in the fifth and two in the eighth. The Bears finished with six runs on 11 hits with three errors.
- LeCompte got the win, throwing 1.2 innings of scoreless relief. He allowed just two hits and struck out two.
- Nick Anderson went 2-for-3 in the second game with an RBI and a run scored. He drew two walks and stole his fourth base of the season.
- Burts went 2-for-4 and scored a pair of runs. He also drove in a run and drew a walk.
- Thomas Jeffries IV went 2-for-4 with a double and a pair of runs scored.
- Cole Fluta had a sacrifice bunt and finished 1-for-3 with a run scored.
- Marbach drew the game-winning walk and drove in two with a sacrifice fly in the first.
- Williams went 1-for-4 in the second game.
- Sanchez Jr. was 1-for-5 with an RBI.
- Zach Rumfield started and struck out five in 5.0 innings. He allowed three earned runs on seven hits.
- John Gaddis came on in relief of Rumfield in the sixth and worked two scoreless innings of relief. He struck out three, walked two and allowed just one hit.

Game Two Islander Key Innings
- In the first, Burts drew a one out walk and went to second on an Anderson infield single. A walk to Werner loaded the bases and Marbach hit a sacrifice fly to drive in Burts for A&M-Corpus Christi's first run. Anderson and Werner each advanced on stolen bases. Williams hit a grounder up the middle but the UCA shortstop overthrew the first baseman allowing two more Islanders to come around to score to make it a 3-1 game.
- Fluta reached on an error with one down in the second. After an out, Burts and Anderson hit back-to-back singles to drive in Fluta to put the Islanders up 4-1.he
- In the bottom of the seventh, Jeffries IV led off with an infield single and got moved up to second on a sacrifice bunt from Fluta. Sanchez Jr. roped a single to left to score Jeffries IV to make it a 5-4 game.
- In the ninth, Jeffries IV doubled to left and after a strikeout, he went to third on a groundout. Burts came through with the game-tying single to left to drive in Jeffries IV. After that, Anderson drew a walk and Werner was hit by a 2-2 pitch to load the bases. Marbach worked a 3-1 count and watched the fifth pitch of the at bat sail wide and outside to force in the game-winning walk.

Up Next
- The nine game homestand continues on Tuesday, April 2, against Prairie View A&M at 6 p.m. at Chapman Field. Fans can purchase tickets HERE, watch live on the Islanders Digital Network and follow live statistics HERE.