'Rally Nuns' return to cheer on the Astros, throw out first pitch at Game 6 of ALCS

A group of nuns from the Dominican Sisters of Mary Immaculate Province attended Game 1 of the ALCS and the 'Stros won. So the sisters are coming back for Game 6! 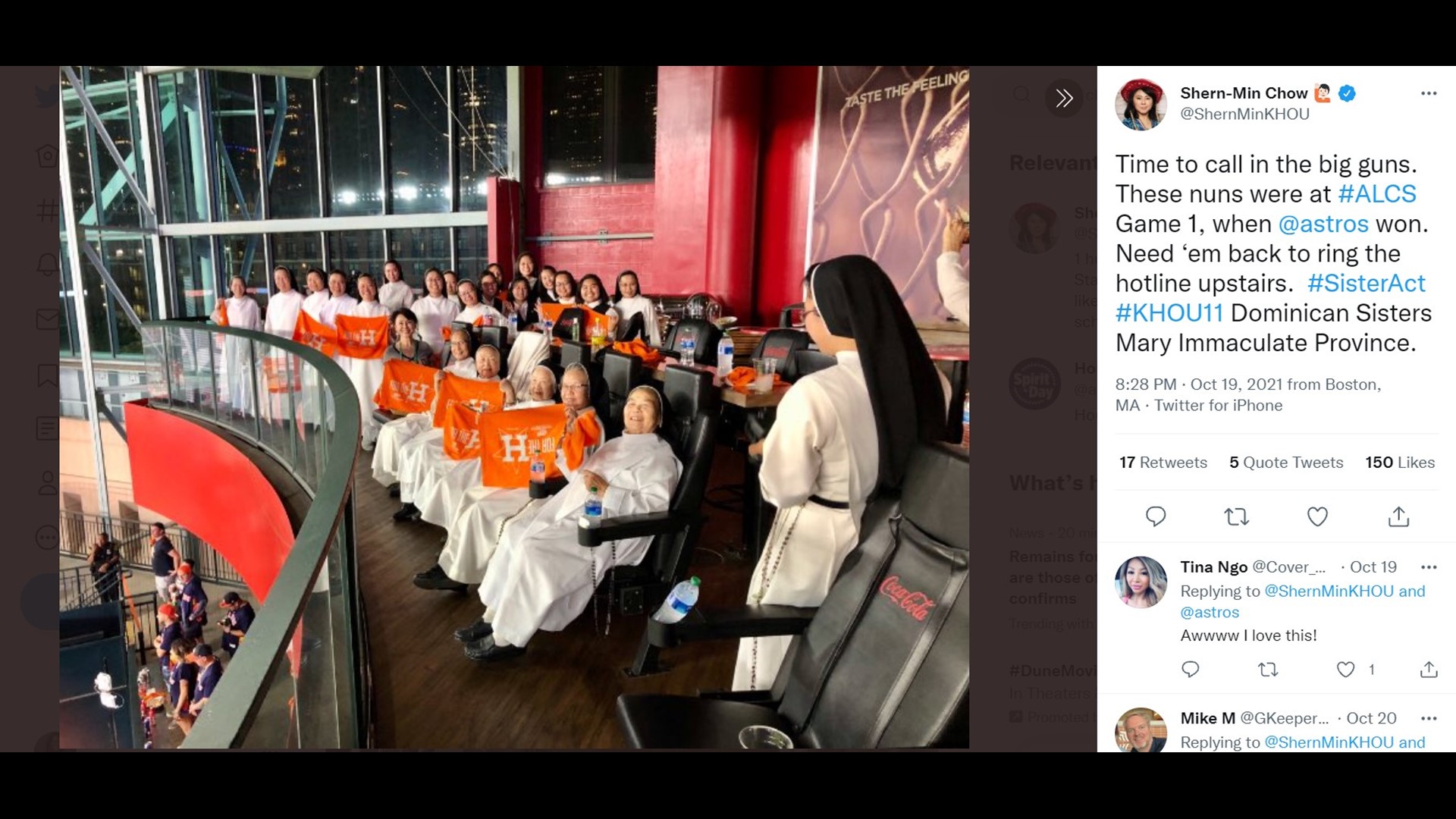 HOUSTON — If ever there was a time to call in the big "NUNS," the time is now!

The Houston Astros will host the Red Sox Friday in Game 6 of the ALCS and if they win this one, the gang is headed back to the World Series.

During Game 1 of the ALCS, there were special guests in Minute Maid Park who covered the 'Stros in prayer. Thirty nuns from the Dominican Sisters of Mary Immaculate Province were invited by Jim "Mattress Mack" McIngvale and the Astros won 5-4 over the Red Sox. Coincidence? We think not!

The 'Stros need that same luck Friday as they try to end the ALCS series, so Mack invited the "Rally Nuns" back.

Time to call in the big guns. These nuns were at #ALCS Game 1, when @astros won. Need ‘em back to ring the hotline upstairs. #SisterAct #KHOU11 Dominican Sisters Mary Immaculate Province. pic.twitter.com/QUxebvLw93

"The Dominican nuns, they were nicknamed the 'Rally Nuns' and we won so I've had lots of Astros fans, even people in the Astros organization ask me when the nuns are coming back," Mack said.

Seventy nuns and a priest will be stationed in the Coca-Cola suite at Minute Maid Park for Game 6. One of the nuns will even be throwing the first pitch, Mattress Mack told KHOU 11 reporter Shern-Min Chow.

"It's a big thrill to them to go out there," said Mack. "We secured a bus because a lot of them are elderly and can't walk a long way so we're going to let them off right in front of the place. They're going to have a good time."

RELATED: Red Sox vs. Astros: What to know for Game 6

These sisters love them some @astros Just listen! So here’s the deal @MattressMack paid for about 30 sisters from the Immaculate Mary Province to come to game one of the #ALCS @astros @RedSox @KHOU pic.twitter.com/dWAGOwzW13

Just like much of Houston, Mattress Mack is hoping the Astros walk off with a win Friday night.

If you want to attend Game 6, you still can, but wear your comfy shoes. That’s because there's only standing room left at Minute Maid. Go to Astros.com/postseason for SRO tickets or call 877-9ASTROS.

Astros Street Fest starts three hours before the game -- so at 4 p.m. -- and fans need a game ticket to get in. Once inside, there’s live music, food trucks and more. 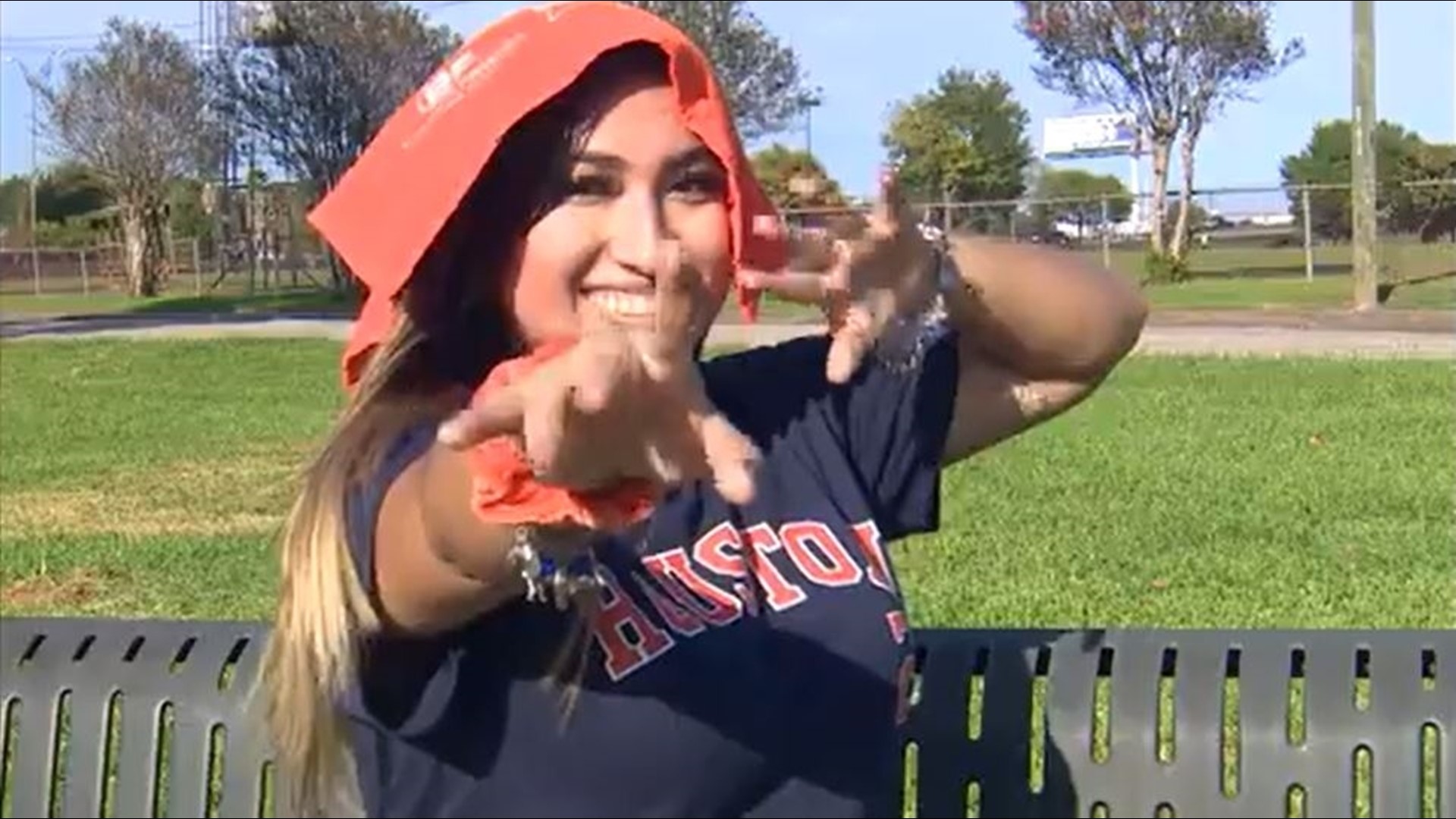