Texas A&M-Corpus Christi baseball picked up a pair of wins in it's wild Saturday where the team had to finish game one of it's three game series, then follow that up with a doubleheader. 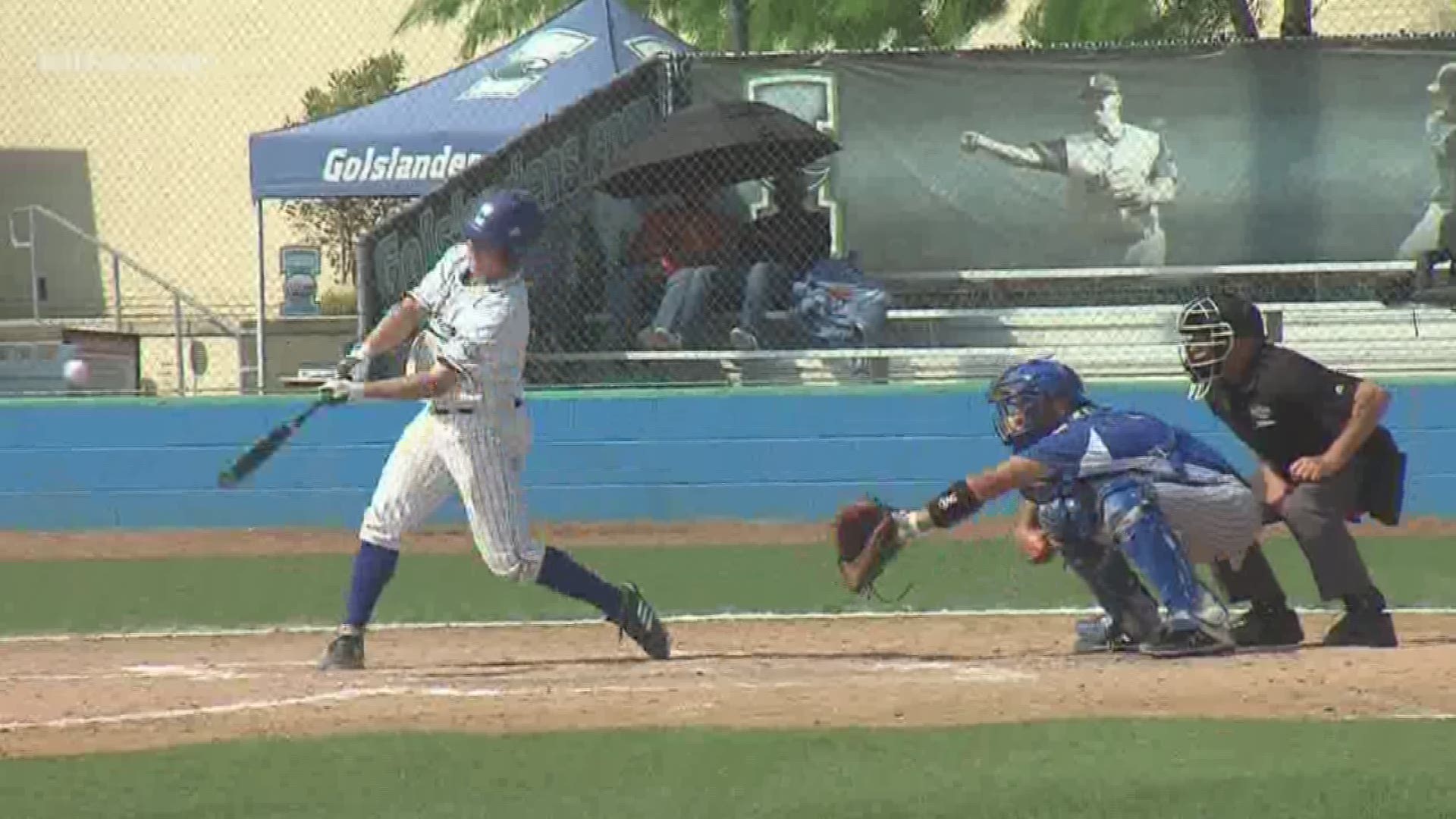 CORPUS CHRISTI, Texas — Story Headlines
- The Texas A&M University-Corpus Christi baseball program wrapped up the weekend series with Houston Baptist on Saturday afternoon, completing nearly 21 full innings of action as the Islanders captured victories in games one and two before falling in the finale.
- After a fog delay forced Friday evening's final three frames to early Saturday, the Blue & Green managed to open the series with a 6-2 come-from-behind win.
- In the second game, Texas A&M-Corpus Christi trailed until the seventh inning, sealing the eventual 9-7 victory off a Nick Anderson double and Itchy Burts home run.
- A resilient Huskies squad battled back in the series finale, ensuring the Islanders could not sweep behind a 14-0 decision.
- The Blue & Green clinched their fourth Southland series this season, improving to 22-12 overall and 10-5 in league competition.
- Meanwhile, Houston Baptist falls to 9-22 on the year and 3-9 in conference action.

Game One Islander Statistics
- After grabbing an early 1-0 advantage in the third inning, the Islanders fell behind midway through the seventh after Houston Baptist knocked home a pair of runs. Anchored by a Luke Marbach three-RBI triple, A&M-Corpus Christi retook the lead and sealed the 6-2 final score.
- The Islanders scored six runs on seven hits with one error while HBU posted two runs on four hits with no errors.
- A.G. Ayala sealed the victory with 2.2 strong frames on the mound, moving back to an even 2-2 record on the season.
- Marbach led the team with his game-high three RBIs, all coming on a line-drive triple into deep right-center field. The junior also managed to cross home during the next at-bat, notching one run scored as well.
- Burts, meanwhile, captured a game-high three hits with one RBI, one run scored and a walk.
- Joey Werner grabbed the first RBI of the series early in the third inning, plating Enrique Sanchez Jr. on a sacrifice fly into left field.
- Mike Williams also posted an RBI on one hit, escorting Marbach home after his crucial triple in the seventh.
- Sanchez Jr. scored a team-best two runs for the game with one single, extending his hit streak to 13 on the year.
- Dustin Lacaze received yet another Friday start on the mound, pushing through 6.1 frames with two runs allowed on three hits. The junior also managed to strike out a weekend-best nine batters.

Game One Islander Key Innings
- With the bases loaded in the third frame, Werner stepped in and nearly managed to force a streaking line drive past the diving left fielder, notching an RBI on a sacrifice fly for the early 1-0 advantage.
- Facing a one-run deficit and two outs late in the seventh, Marbach put together a clutch performance during his key at-bat. The junior smashed a full count pitch deep into right-center field, clearing the bases for a 4-2 Islanders edge and setting himself up in scoring position at third.
- Williams took advantage one at-bat later, pushing a pitch through the right side for an RBI single.
- Following a Cole Fluta walk and Sanchez Jr. double, Burts picked up his RBI with a single into shallow left field, pushing the Blue & Green lead to a 6-2 margin.

Game Two Islander Key Statistics
- Despite trailing the Huskies for the entire matchup, A&M-Corpus Christi's resilient offensive pressure managed to crack the HBU defense late in the seventh, grabbing a lead the Islanders bullpen would never surrender. After another pair of runs in the eighth, the Blue & Green locked in the eventual 9-7 win and series victory.
- The Islanders scored nine runs on 11 hits with two errors while Houston Baptist notched seven runs on eight hits with two errors of their own.
- Hayden Thomas earned his first-ever win as an Islander, tossing 1.0 frames with zeros across the board. The freshman retired one batter on strikes while surrendering just one walk during his time on the hill.
- Meanwhile, John Gaddis picked up his first save of the season as he closed out the final two innings. The sophomore allowed just one run on one hit with a team-best four strikeouts.
- Offensively, Burts led the way behind his two-run homer -- the second of his career -- in the bottom of the eighth, picking up two RBIs on three hits with a pair of runs scored.
- Five other Islanders picked up RBIs on the day with three -- Sanchez Jr., Anderson and Thomas Jeffries IV -- posting a multi-hit game.
- Sanchez Jr. finished with two hits and one RBI, pushing his hit streak out to 14 games (one short of the team-high this year). The senior also earned three walks during the game.
- Leo Perez picked up his usual game two start on the mound, working through 4.0 innings with four runs allowed on five hits and one strikeout.

Game Two Islander Key Innings
- Facing a two-run deficit right out of the gate, Sanchez Jr. and Werner worked in tandem for the Islanders' first run of the game. Following the former's leadoff single, Werner managed to drive in his fellow senior off a double into right center, cutting the Huskies lead to 2-1.
- After HBU notched another run in the second, Fluta pushed Justin Taylor home behind a sacrifice bunt, keeping the HBU advantage at just one.
- Sanchez Jr. continued the trend in the fourth frame, plating Williams with an RBI single to maintain a one-run deficit for the Blue & Green.
- Down three in the sixth, Taylor picked up a two-out double before working his way home on an RBI single from Jeffries, pulling the Islanders back within two, 6-4.
- With both Sanchez Jr. and Burts on just one out deep into the seventh, Anderson managed to generate some key offense behind a double into left field. Initially, the hit scored only Sanchez Jr., but an errant throw by the Huskies outfield saw the ball careen into the stands, resulting in a free two-base advancement for both Burts and Anderson. By the play's end, the Islanders had posted three runs and captured their first lead of the game, now up 7-6.
- With two outs down in the eighth and Sanchez Jr. set up on second, Burts drove a pitch down the right-field line and over the fence for a two-run homer. With the Huskies notching another run in the ninth, the blast served as critical insurance runs as the Blue & Green secured a game two win.

Game Three Islander Key Statistics
- After dropping the opening two matchups of the series, the Houston Baptist offense came out firing on cylinders for game three while the Islanders struggled to maintain defensive consistency, falling by a 14-0 mark to the Huskies.
- The Islanders failed to score on eight hits with five errors while the Huskies managed 14 runs on 16 hits with no errors.

Up Next
- The eight-game home stretch concludes on Tuesday, April 9 as Houston-Victoria visits Chapman Field for a 6 p.m. matchup. Fans can purchase tickets HERE, watch live on the Islanders Digital Network and follow live statistics HERE.