Texas A&M-Corpus Christi basketball was swept by Stephen F. Austin in its double-header. The men falling 75-67 and the women falling 72-49. 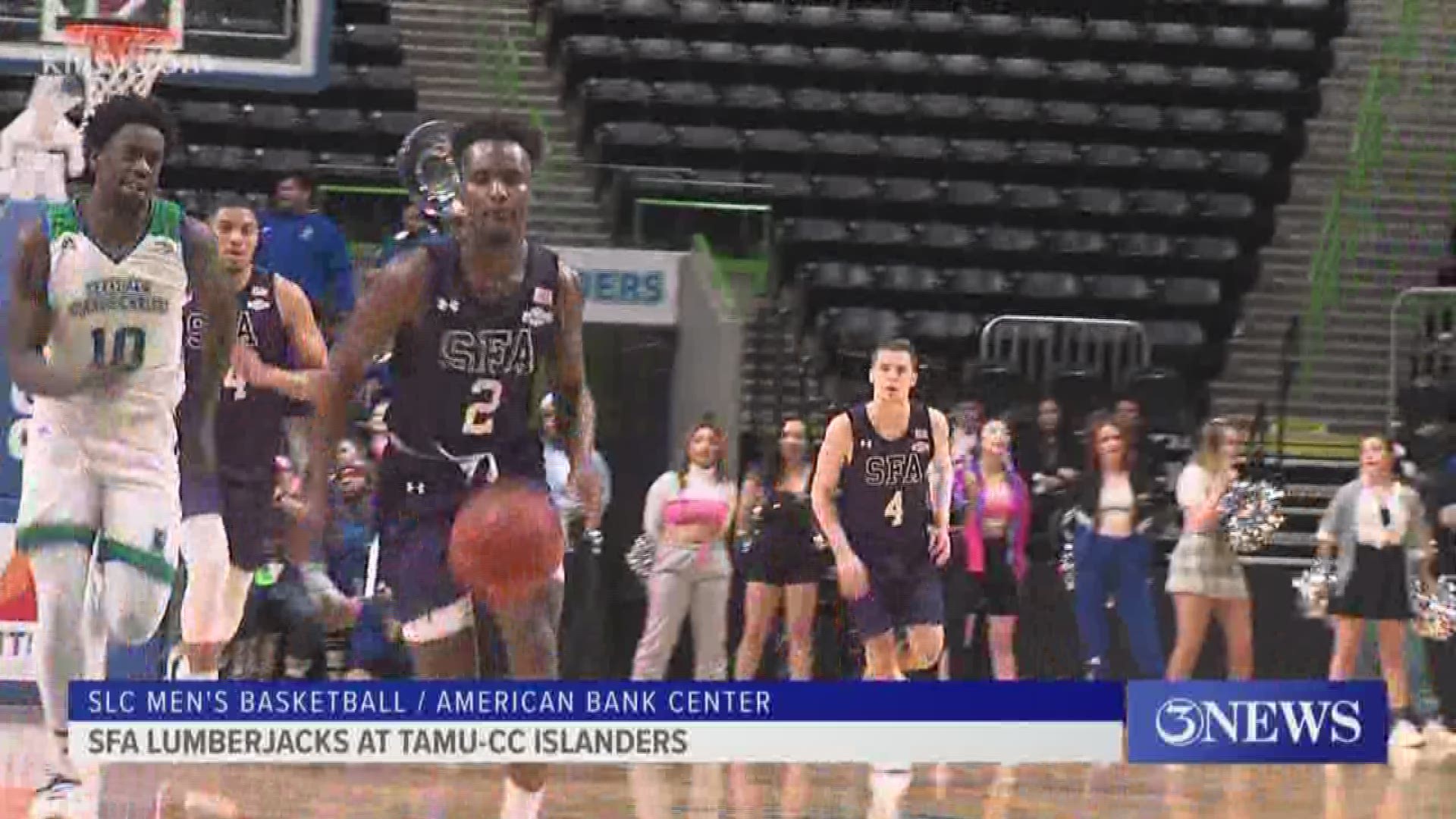 Gavin Kensmil totaled 23 points to help lead the SFA men's basketball team past the Texas A&M-Corpus Christi Islanders 75-67 on the road Wednesday. SFA's overall record moved to 22-3 and conference record improved to 13-1 following the win. SFA also clinched a spot in the 2020 Southland Conference Tournament with the victory, becoming the first program to do so this season after a one-year hiatus from the tourney.

SFA forced 25 Texas A&M-Corpus Christi turnovers while committing 20 themselves in Wednesday's game. The 'Jacks turned those takeaways into 27 points on the offensive end of the floor. Ware's six steals led the way for SFA.

» SFA never trailed in the second half on its way to victory.
» SFA had a 34-29 edge on the boards in the win.
» The SFA defense forced 25 turnovers, accruign 14 steals and turning the Islander miscues into 27 points.
» SFA cleaned up on the offensive glass, collecting 10 offensive boards in the game.
» Gavin Kensmil led the 'Jacks with a game-high 23 points, while Nate Bain led his team with eight rebounds.

SFA started off strong, putting together a 32-31 lead heading into halftime. SFA did most of its first half damage in the paint, scoring 26 of its 32 points close to the basket.

Following intermission, SFA kept widening that lead, expanding it to 39-36 before going on an 8-0 run, finished off by Bain's layup, to grow the lead to 47-36 with 15:29 to go in the contest. The Islanders narrowed the margin somewhat before the game was over, but the 'Jacks still cruised the rest of the way for the 75-67 win. SFA got out on the break in the period, scoring 10 fast break points.

Key Islander Statistics and Sequences
- With both squads even at 12-12 at the end of the first quarter, the Islanders opened up the second frame with five straight points to take a 17-12 lead over the Ladyjacks. SFA responded with seven of the next nine points to tie the game at 19-19.
- Stephen F. Austin took a 30-25 lead into the locker room and outscored Texas A&M-Corpus Christi, 19-8 in the third. The Ladyjacks held a double-digit lead for the rest of the evening, ultimately claiming their third straight victory.
- Coleman-O'Bryan led the offense with 12 points, seven of which came from the charity stripe. She also knocked down one three point field goal.
- In addition to her double double, Westbrook also recorded two blocks and an assist.
- Senior forward Tiara Matthews nearly collected her third career double double, as the Sugar Land, Texas native scored nine points to go along with nine rebounds.
- Booth also nearly reached double figures with nine points. In addition, she added three rebounds, three assists, one steal and a block.
- Bryant made her presence known on the defensive end of the floor, collecting a season high five blocks.
- As a unit, the Blue and Green shot 16-of-19 from the charity stripe, good for 84.2-percent.
- The Islanders won the battle of the boards, grabbing 41 rebounds compared to the Ladyjacks 36. The two squads were nearly identical in offensive boards, with A&M-Corpus Christi grabbing 11 and SFA 12.

Islander Notables
- Booth's one block tonight puts her at 123 for her career, tying her with Roberta Plaza for the most in a career in program history.
- Bryant's five blocks tonight give her 104 for her career in just two years with the program. She is just the fourth player in program history to accomplish the feat of 100 career blocks.
- Bryant now has 38 total blocks in 2019-20 putting her in a tie for 8th place for blocks in a single season.
- Coleman-O'Bryan's 10 points tonight marks the third consecutive time she has reached double figures against SFA, dating back to last year's conference tournament semifinal matchup. She has also collected double-digit points in eight of the Islanders' last nine games..