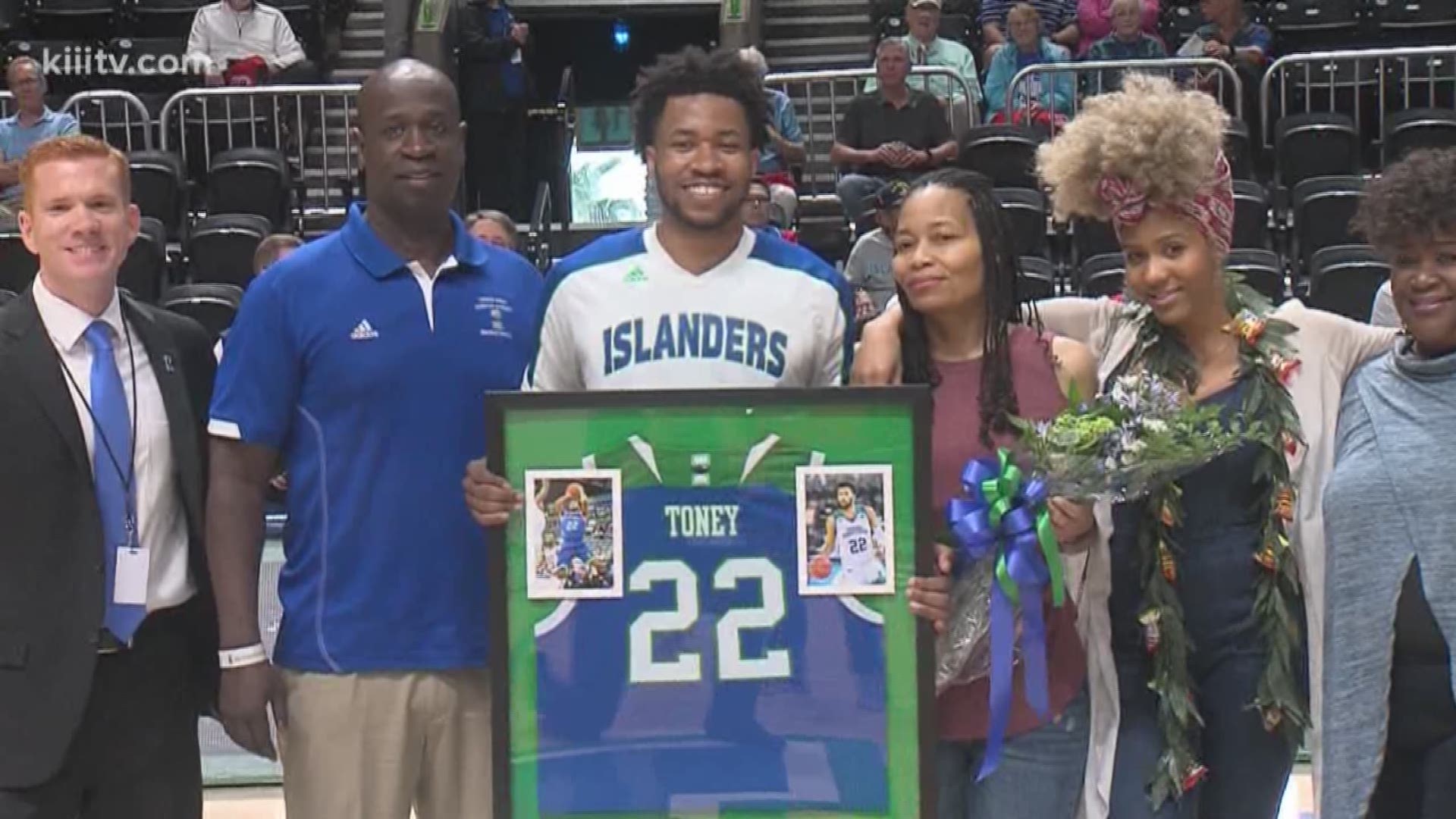 - Kareem South led the way with 21 points on 8-of-11 shooting. He was 5-of-6 from the free throw line, grabbed three boards, had three assists and added a steal in 35 minutes, playing late into the second half with four fouls.

- Emmanuel Toney scored a career-high 20 points on his Senior Night. He went 8-of-11 from the field with a game-high six assists, four rebounds and a steal. He went 3-for-4 at the charity stripe and knocked down a three pointer.

- With the win, the Islanders clinched the No. 6 seed in the 2019 Southland Basketball Tournament next week in Katy, Texas. Texas A&M-Corpus Christi will take on No. 7 Central Arkansas on Wednesday, March 13, at 7:30 p.m. at the Merrell Center.

- Texas A&M-Corpus Christi held a 36-24 advantage in points in the paint, and had six fast break points to HBU's four.

- Each team grabbed 38 rebounds on the evening.

- The Islanders trailed 38-36 at half but outscored the Huskies, 40-31, in the second half to pull away for the victory.

- Jashawn Talton scored 19 points on 7-of-11 shooting. He hit a pair of three pointers and was 3-of-4 at the free throw line. He grabbed four rebounds, had two assists, blocked a shot and recorded a steal in 34 minutes.

- Jake Babic scored 10 points and led the team with eight rebounds on his Senior Night. He hit a pair of three pointers and recorded three assists.

- Elijah Schmidt had seven rebounds and hit his only shot of the game. He also had an assist in 17 minutes.

- Tony Lewis scored four points and grabbed five rebounds in 15 minutes of action. He had an assist and also had a steal on the defensive end.

- The Islanders are now 9-3 all time against HBU and 6-0 in Corpus Christi ... South has now gone over 20 points in seven games this year and 13 times in his career ... Saturday was Toney's first 20 point game of his career and the 10th time this year he has scored in double figures ... Talton has also scored in double figures 10 times this year and it was the sixth game for Babic ... the team is 1-1 now when Peyton Smith hit the pregame halfcourt shot ... Saturday was the fourth time this year the Islanders have overcome a half time deficit to win ... South has led the team in scoring 13 times this year ... it was the first time this season that Babic has led the team in rebounding ... Saturday was the 14th time Toney has had the team-high in assists.

- The Islanders will face Central Arkansas on Wednesday, March 13, at 7:30 p.m. at the Merrell Center in the first round of the 2019 Southland Basketball Tournament. The game will be broadcasted live on ESPN+ and on 1440 AM KEYS. There will be live stats available HERE.