Islanders shut out fifth straight opponent with sweep of Tarleton 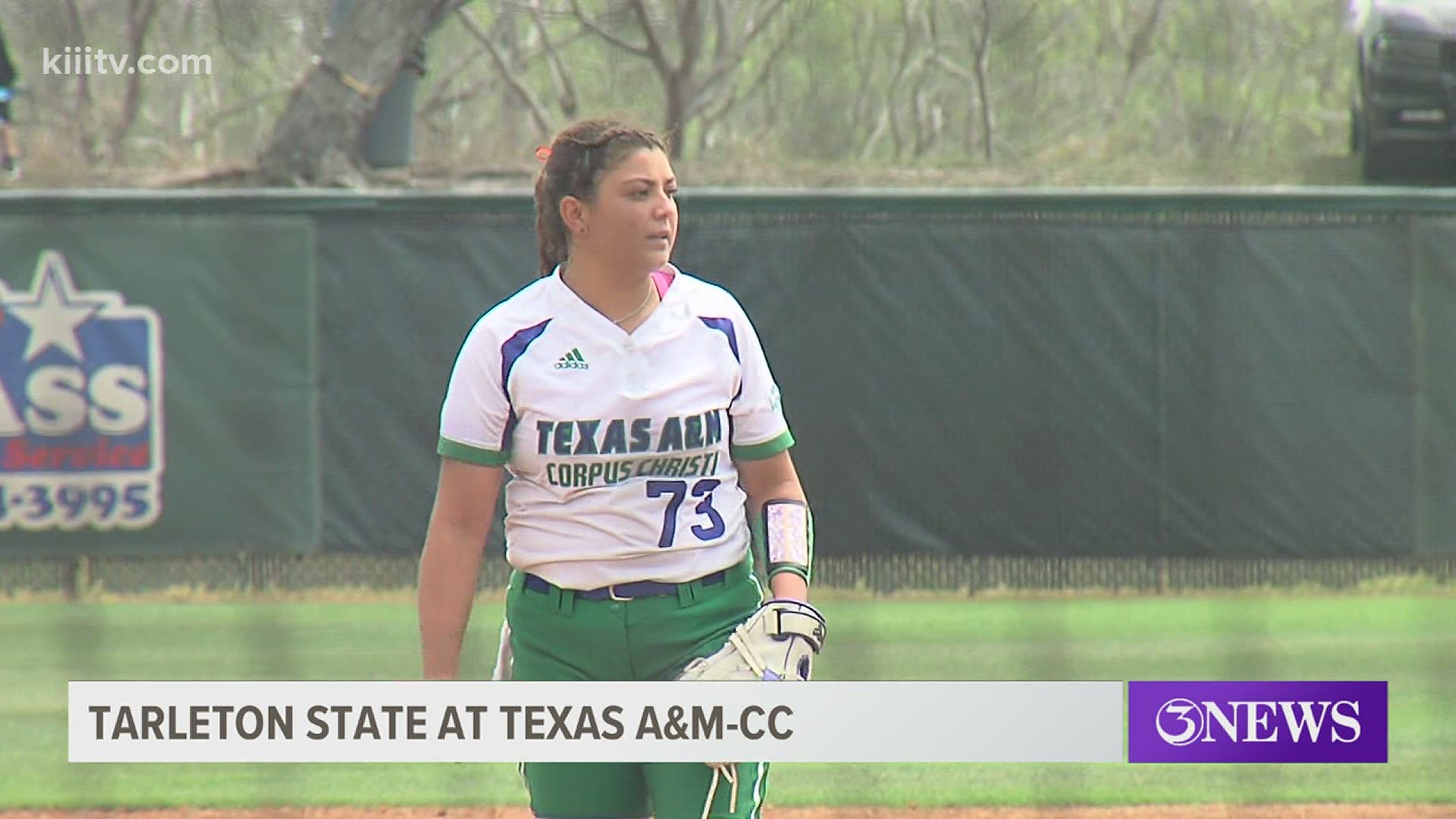 CORPUS CHRISTI, Texas — The program record for consecutive shutouts was broken Wednesday as the streak was upped to five for the Texas A&M-Corpus Christi softball program with 4-0 and 5-0 wins over Tarleton State at Chapman Field.

The previous record for A&M-Corpus Christi (14-11, 5-1 SLC) was four straight shutouts set three times, the last coming in 2011. Additionally, the team is on its first five-game winning streak since 2015.

Sophomore Beatriz Lara threw a complete-game shutout to pick-up the win in game one, and fellow sophomore Jenika Lombrana tossed 6.0 frames to earn the win in game two. Freshman Audrey McNeill threw the final inning in relief in game two to break the record after stranding the bases loaded for Tarleton (11-21, 0-0 WAC).

With a hit in each game, sophomore Ashleigh Sgambelluri extended her hitting streak to six and her reached base streak to 10. Freshman Alie Alcantar is also on a five-game hitting streak.

Game one was decided by two at-bats, both with two outs. The first came in the third inning when Sgambelluri launched a triple to straight-away center field to plate two runs. The other came in the fifth when sophomore Pal Egan notched a two RBI single up the middle.

Sgambelluri went 2-for-2 at the plate with a walk, run scored and two RBIs. Both of her hits went for extra bases as she doubled to right center in the first inning. It was her team-leading seventh multi-hit game and fifth multi-RBI game of the year.

Egan also tallied a multi-hit outing with a 2-for-3 day. It was her sixth multi-hit and second multi-RBI game of the season.

In game two, Alcantar submitted her first career multi-hit game with a 2-for-3 outing with a walk and run scored. Freshman Haley Morse went 1-for-3 with a walk and three RBIs.

A&M-Corpus Christi got on the board in its first at-bat. After a lead-off single to left by Alcantar, she advanced to second on a hit-by-pitch, to third on a bunt single by Sgambelluri and scored on an RBI ground out by Morse.

The Islanders tacked-on two more in the second to go up 3-0. It came on back-to-back walks with the bases loaded by Sgambelluri and Morse.

In the fourth, A&M-Corpus Christi added two insurance runs to make it a 5-0 game. With two outs, Morse doubled down the left field line to score a run, and then came in on an RBI single to left by Noyola.

Lombrana recorded her fourth win of the year after allowing just two hits in 6.0 innings. McNeill didn't allow a hit in her inning of work.

The Islanders improved to 12-0 on the year when leading after four innings.

A&M-Corpus Christi is now 3-0 all-time against Tarleton State with all three meetings coming this year. The Islanders topped the Texans 13-3 at the Scrap Yard Blizzard Challenge on Feb. 20 in Conroe, Texas.

A&M-Corpus Christi will look to extend its winning streak this weekend when it hosts McNeese for a three-game series. Game one is scheduled for 1 p.m. Friday. With a 5-1 SLC record, the Islanders are off to their best SLC start since 2011.