Texas A&M-Kingsville clinched the series over Oklahoma Christian with a 15-8 game two win. 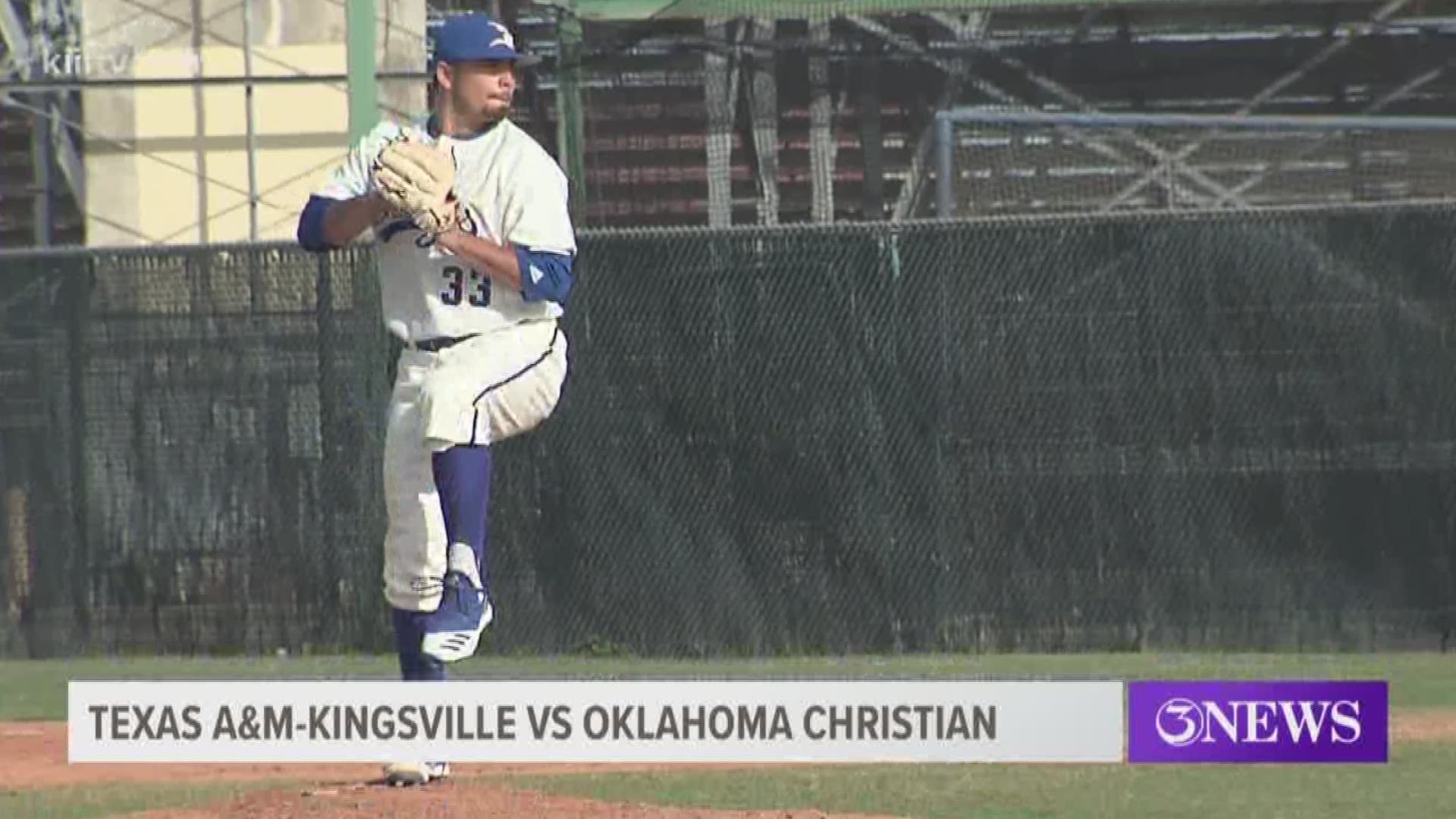 KINGSVILLE, Texas — A combined 12 pitchers between both squads took to the mound today as the Texas A&M-Kingsville baseball program clinched its first series win of the 2020 season on Saturday at Nolan Ryan Field with a 15-8 decision over Oklahoma Christian in Lone Star Conference action.

"I liked the way the hitters continued to apply pressure," said head coach Jason Gonzales. "We scored in six out of the eight innings and any time you're putting up runs in almost every inning it makes it tough on the other team.

The Javelinas (2-0, 2-0 LSC) posted five extra-base hits, with sophomore Steven Bonuz (Port Lavaca, Texas) launching the teams' first long ball of the year in the bottom of the fifth, and endured a seventh-inning push from the Eagles (0-2, 0-2 LSC) to take the win.

TAMUK put away the first six runs of the game with two in the first as senior Austin De Leon (Frisco, Texas) scampered home on a fly ball to left from junior Giancarlo Servin (Edinburg, Texas) that was eventually dropped, while a bounding-ball single through the left half of the diamond from Bonuz plated senior Seth Spinn (Holland, Texas) later in the at-bat.

Redshirt senior Kohl Ullman (Houston, Texas) recorded the third run as he made his way home on a sacrifice fly to center from senior Aldo Buendia (Laredo, Texas) in the second stanza. Three more crossed the plate in the third starting from a single from freshman Damian Rodriguez (McAllen, Texas) to move Servin home, followed by a sacrifice fly from Ullman that capped Rodriguez and the last coming from Buendia's liner to left that scored senior Cameron Melcher (Kerrville, Texas).

OC got on the board in the fourth and fifth innings as Cole Lee doubled down the right-field line in the former to score Austin McCain and Coleton Hinkle, while a wild pitch in the latter brought Brian Empkey to the plate. Bonuz, meanwhile, skied his first home run of the season out to right field after drawing a full count in his at-bat and taking the sixth pitch over the fence for a 7-3 Blue and Gold lead going into the sixth.

The seventh inning proved crucial as the Eagles tacked on three more runs to their total, the first of which came on a single down the left-field line from McCain while the next two were courtesy of bases-loaded walks issued to Lee and Grant Lake.

The timely pitching change to junior Tyler Flores (San Antonio, Texas) became the pivotal moment, despite him issuing the walk to Lake, as a fielder's choice groundball to Buendia ended the threat before OC could even the count and instead set the score at 7-6 in favor of the Hogs.

Redshirt junior Will Arnold (Magnolia, Texas) ensured the lead remained firmly in the Javelinas' control after he lined a pinch-hit single into right-center that scored Spinn in the bottom half of the seventh, igniting a five-run rally in the process. The next two were a result of a single into center field from Ullman later in the at-bat, while the final two came on a single into right from De Leon for a 12-6 cushion going into the following frame.

Three more runs were added to TAMUK's total in the bottom half of the eighth after Servin started the scoring with a double to left-center to plate Spinn. Spinn led the inning off with a triple pasted into left-center on the first pitch he saw before he strolled home on Servin's extra-base hit in the next at-bat.

Servin ended up at home after redshirt sophomore Rey Chapa (The Woodlands, Texas) pushed a single into center and the errant throw back to the infield escaped the Eagles' grasp and gave Servin enough room to score. Chapa eventually crossed the plate later in the stanza on a groundball to second base from Ullman to set the score at 15-6. OC tacked on two more in the top of the ninth but it wasn't enough to swing momentum as the 15-8 final went in favor for the Hogs.

TAMUK relied on six pitchers to get the win with redshirt junior Amado Almanzar (Santo Domingo, Dominican Republic) got the start and went 4.2 innings on the hill with six strikeouts and three runs allowed for the no-decision. Redshirt sophomore Jacob Vasquez (Victoria, Texas) was credited with the win after throwing for 1.2 innings and added three strikeouts to his total.

Junior Tyler Henson (Abilene, Texas), along with Flores, worked out of the seventh before classmate Justin Lundquist-Irvin (Fort Worth, Texas) threw a scoreless eighth with a pair of punchouts. Redshirt Junior Nick Hutchison (Katy, Texas) closed the books on the Eagles as he rang up one batter on strikes before ending the game on a double-play groundball to Buendia.

De Leon, Spinn and Bonuz all ended up with two hits in the win, while Ullman led the team with four RBI.

Game three of the opening weekend will feature first pitch at 1 p.m. CT at Nolan Ryan Field on Sunday, February 2.