Javelinas baseball hangs on in tight 9th inning for win over No. 5 West Texas A&M 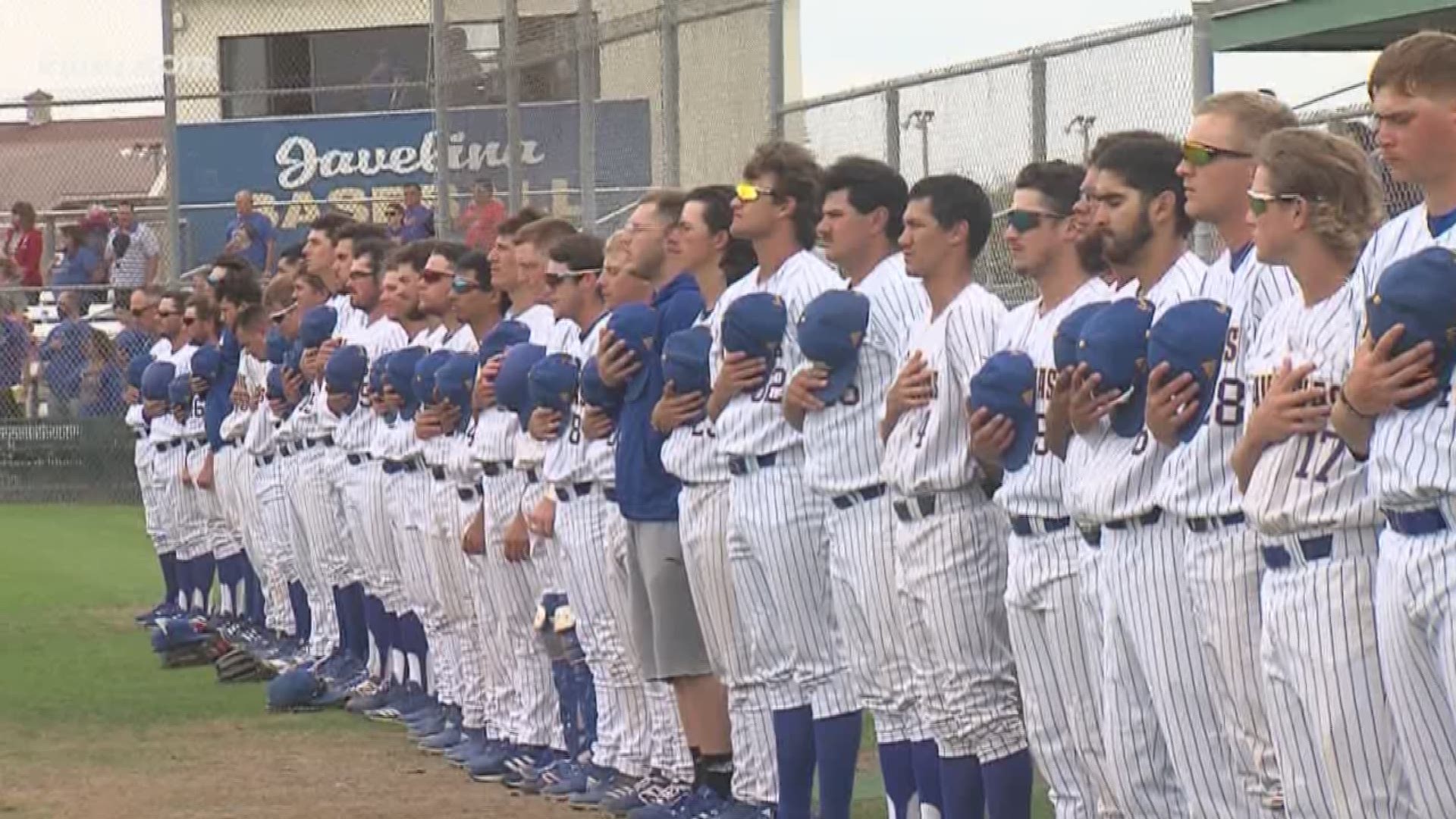 KINGSVILLE, Texas — Senior transfer Eric Sandoz (Austin, Texas) was faced with a choice with two outs in the top of the ninth on Saturday at Nolan Ryan Field against No. 5/3 West Texas A&M, to either face down a .402 hitter in Clay Koelzer with the tying run at third or to take on the .433 hitter in Kyle Kaufman with the go-ahead run at first.

An intentional walk issued to Koelzer turned out to be what the doctor ordered as Sandoz secured his third save of the season with a fly ball to shallow right field to give the Javelinas (18-9, 2-1 LSC) a narrow 5-4 win over the Buffs (22-5, 1-2 LSC) in the third game of the Lone Star Conference opening series.

He's been good for us all year, we had confidence in him and he got the job done."

The contest featured many momentum swings before it got to that point, as senior Joshua Valdez (Kyle, Texas) got the start for the Hogs and came away with his fourth win of the year behind six innings of work and six strikeouts.

The Buffs started the scoring in the top of the second after Kaufman reached on a Javelina miscue and ended up scoring on a double to right from Jake Pederson later in the at bat. TAMUK had the response in the bottom half of the frame after junior Cameron Melcher (Kerrville, Texas) drew a two-out walk and ended up scoring on deep double to right center from freshman Steven Bonuz (Port Lavaca, Texas) in the following at bat.

The Blue and Gold took over the lead in the bottom of the third when junior Austin De Leon (Frisco, Texas) drilled the 1-1 pitch from Drew Mesecher out to left center and strolled into second when the dust had settled, eventually scoring on a sacrifice fly to center from sophomore Giancarlo Servin (Edinburg, Texas) for a 2-1 Javelina lead.

De Leon ended up at third after junior Seth Spinn (Holland, Texas) ran his active hitting streak to 15 games with a bounding-ball single through the right side with one out. Spinn went 1-for-2 on the day with three walks, a stolen base and one RBI.

TAMUK put the score at 3-1 in the fourth after Bonuz bounced a double down the right field line to get Melcher home, while a liner into center in the bottom of the fifth from redshirt senior Pablo Hernandez (Havana, Cuba) added the fourth run for the hosts as classmate Manny Loredo (McAllen, Texas) took a two-out double to right center and ended up coming home on the next at bat.

The final run for the Hogs came across in the fifth after WT loaded the bases and issued a walk to Spinn with two outs for a 5-1 cushion going into the seventh.

The Buffs added their second run on a sacrifice fly from Keone Givens in the top of the seventh following a pitching change from TAMUK, while the ninth inning came down to the wire for both sides.

A pair of Javelina miscues kept WT in the contest as Justice Nakagawa reached on fielding error with a runner at first. Cade Engle provided the third run for the visitors after he scored on the following at bat when Givens dropped down a bunt and drew an errant throw down to first.

Nakagawa ended up scoring later in the stanza and an intentional walk issued to Koelzer set the stage for the showdown between Sandoz and Kaufman, with the former proving victorious for his third save of the season.

Bonuz was the lone Javelina to post multiple hits in the game, coming in the form of two doubles, and added two RBI in the process.

The series finale between the teams is set for a 1 p.m. CT first pitch on Sunday, March 24, at Nolan Ryan Field.