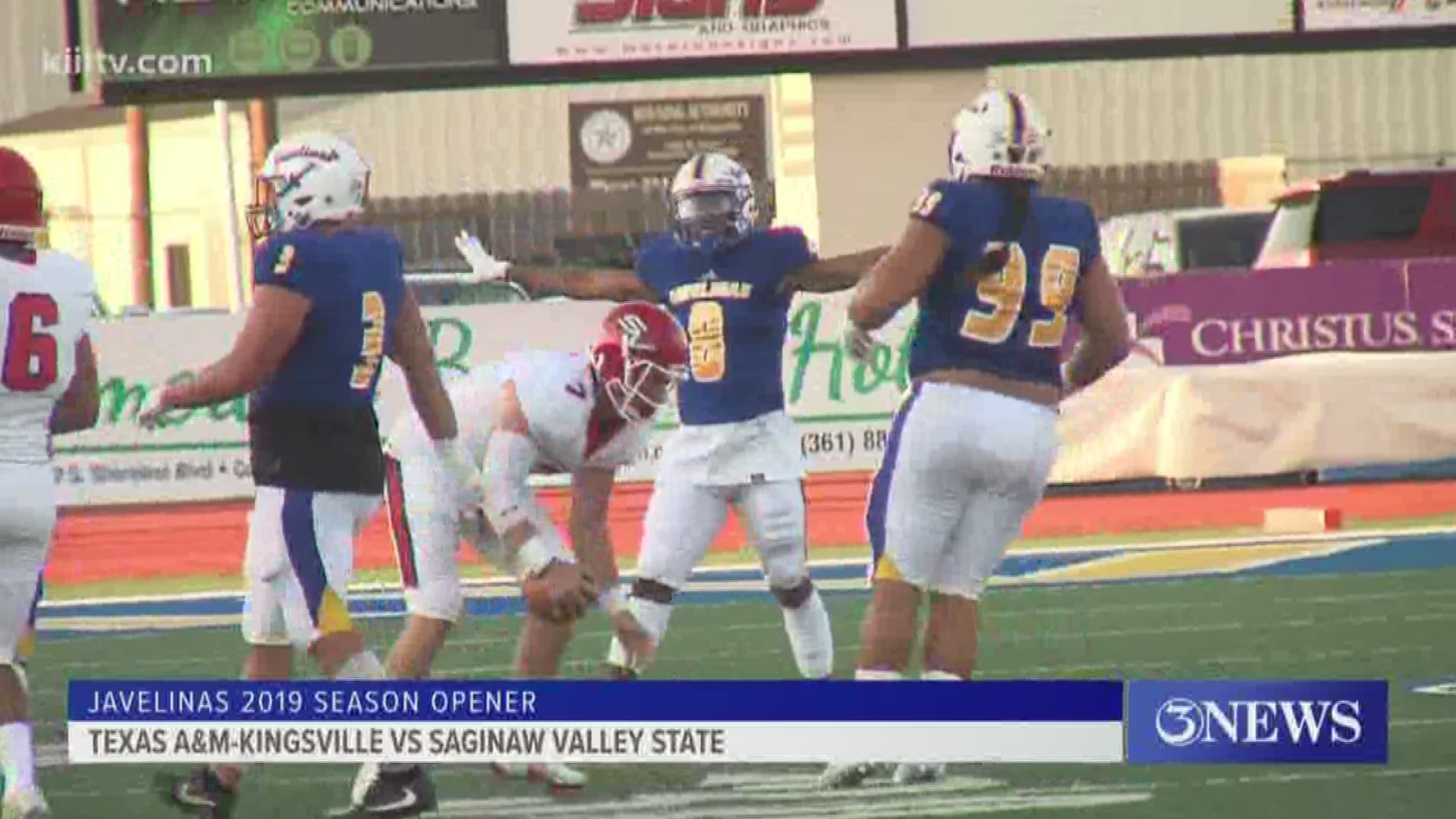 KINGSVILLE, Texas — Five turnovers punctuated the 2019 season opener for the Texas A&M-Kingsville football program against Saginaw Valley State on Saturday at Pepsi Field at Javelina Stadium for the 60th reunion of the 1959 NAIA Championship team.

The Cardinals (1-0) converted two of the turnovers into 14 points that proved too big a gap for the Javelinas (0-1) to cross as the hosts came away on the backend of a 35-14 decision to start the year.

"The one stat line that shows more than the scoreboard was we gave the ball up five times and took away zero," said head coach Daren Wilkinson. "We've got learn how to hold on to the football, as I'm sure we'd like to have all five back and we've done a good job of that in practice, so that's something we need to get back to is taking care of the football.

"What I do love about this team, though, is that they battled until the very end. We need to maintain that and capitalize on the opportunities given to us."

Both sides went scoreless through the first quarter as freshman Romario Perez (Corpus Christi, Texas) failed to connect on a 46-yard field goal try at the 9:23 mark of the frame for the only scoring chance of the stanza.

The Cardinals forced the first turnover eight ticks into the second quarter as a fourth-down pass from senior Koy Detmer Jr. (Somerset, Texas) was cut off by David Still in SVSU's red zone to squelch TAMUK's drive.

The next opportunity for either side came at the 5:39 mark as the Cardinals' Connor Luksic had a 28-yard field goal attempt carom off the left upright to keep the zeroes on the scoreboard, but the visitors broke through on their next drive as Ryan Conklin connected with Chad Gailliard for 44 yards to break the scoreless tie at the 3:37 mark

The Cardinals took advantage of another TAMUK turnover just over two minutes later as Still forced a fumble from redshirt senior Luis Lopez (San Diego, Texas) with 1:17 remaining in the half and Conklin converted a 30-yard pass to Nysir Minney-Gratz to put the Hogs in a 14-0 deficit at the break.

TAMUK found purchase in the third quarter after redshirt junior Cade Dyal (Kerrville, Texas) tabbed redshirt senior Devin Milburn (Galveston, Texas) for 22 yards to cap off a nine-play, 72-yard drive to get the hosts on the board with 5:19 remaining in the frame.

SVSU had the quick response on the following drive after Conklin found Casey Williams for 79 yards through the air to rebuild the lead to two scores at 21-7 at the 4:23 mark.

The Javelinas had their ensuing drive end in SVSU's red zone as the fourth-and-short pass sailed just out of the reach of redshirt senior Aaron Dilworth (Corpus Christi, Texas) while the Cardinals went three-and-out on their next outing.
TAMUK started off the fourth quarter near midfield but a 71-yard pick-six from Marvin White set the deficit at 28-7 with 14:42 remaining in the game.

Lopez cut the lead back down to two scores as his one-yard punch into the end zone at the 10:30 mark was the end cap on an 11-play, 62-yard drive to set the contest at 28-14 favoring SVSU. Unfortunately, the visitors chewed up the next 5:49 off the clock and added a 13-yard rush from Conklin to put the game out of reach at 35-14 with less than five minutes to play.

The Hogs had their final drive stall in SVSU territory while the Cardinals ran out the final 2:07.

Dyal finished with 191 yards through the air on 18 completes, adding a 22-yard strike to Milburn as his lone score.

Milburn finished with nine catches for a team-high 120 yards as the Javelina receiving corps totaled 263 among 10 different targets.

Redshirt sophomore Alec Lewis (Crosby, Texas) led the defensive effort with 12 tackles, including one for loss, while redshirt junior Tre'Michael Tutt (Channelview, Texas) added nine of his own to go with two for loss.

The Javelinas will face a former Lone Star Conference foe in Sul Ross State next week on September 14, with kickoff for the Hispanic Heritage Weekend set for 7 p.m. at Pepsi Field at Javelina Stadium.