Texas A&M-Kingsville couldn't get into the endzone in the final game until the fall. 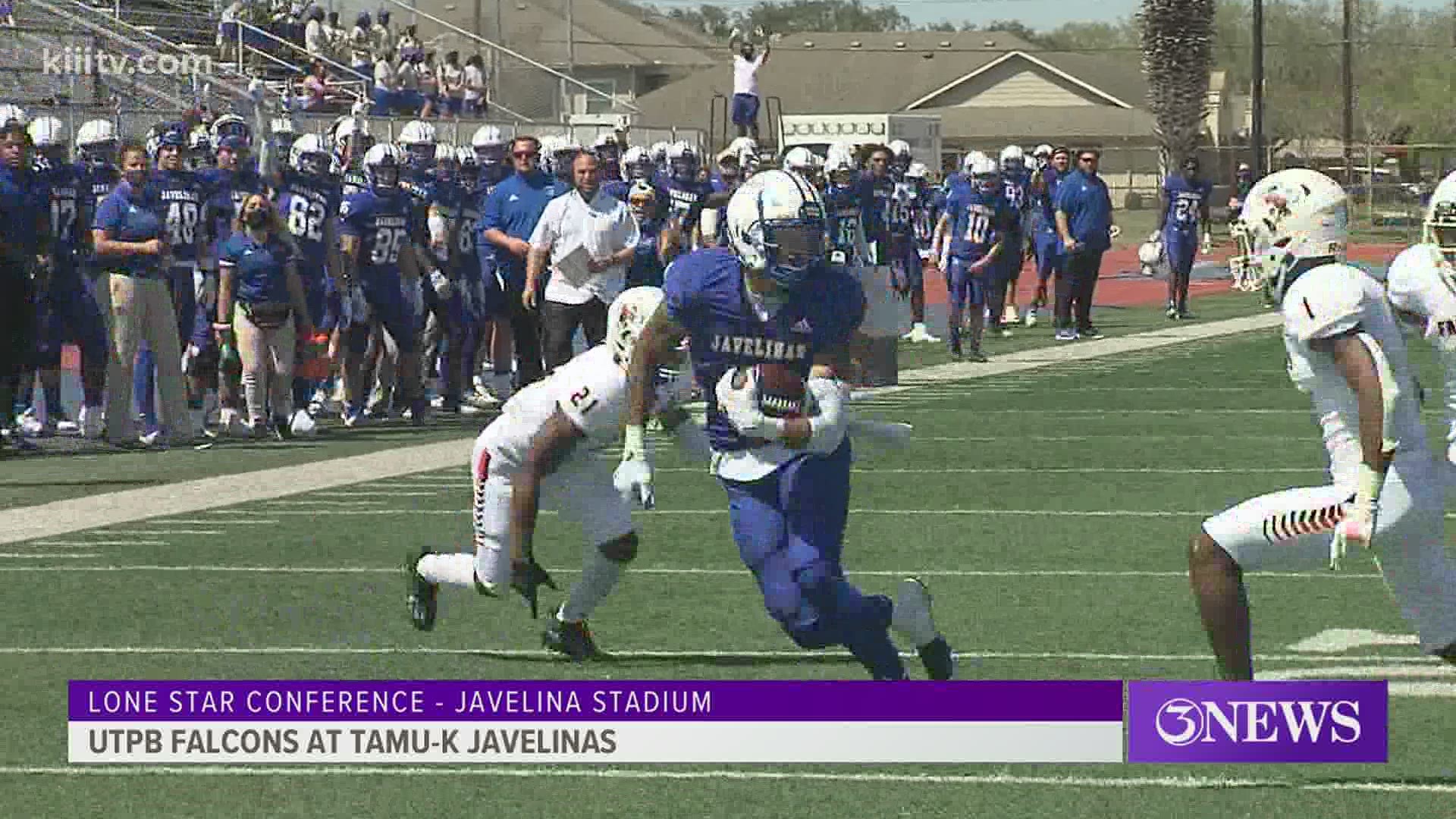 KINGSVILLE, Texas — The Texas A&M-Kingsville football program faced UT Permian Basin for its lone spring game at Pepsi Field at Javelina Stadium on Saturday and eventually fell by a count of 17-2 to wrap up the spring season.

The Javelinas (0-2) made three trips deep into the Falcons' (4-0) territory but came up short each time en route to the loss.

UTPB struck first in the opening quarter after Hayden Decossas drilled a 25-yard field goal through the uprights. The Hogs forced a fumble on the visitor's opening drive but stalled out after three plays to give possession back to the Falcons leading into the scoring drive. The next score didn't come until 7:16 in the second after Brayden Thomas connected with M.J. Link for 33 yards following a bad snap from TAMUK.

In total, the first six Javelina drives ended in a punt before the fumble midway through the second set up the Falcons deep in TAMUK territory.

The hosts finally broke through to the UTPB red zone late in the third after redshirt sophomore Amonte Bowen (Donna, Texas) rushed for 36 yards on the drive that started at TAMUK's 39-yard line.

The decisive play came on a 17-yard pass from redshirt sophomore Zadock Dinklemann (Somerset, Texas) to redshirt senior Ty Chisum (Eagle Pass, Texas) that posted the Hogs on a first-and-goal situation. UTPB's defense ended up making the stand and stuffed three rush attempts along with a short-yardage pass to force a turnover on downs.

The effort wasn't all for naught as the Javelina defense forced a bad snap on the ensuing punt attempt from the Falcons and the ball skipped out of bounds for a safety to show 10-2 on the scoreboard with 12:37 remaining in the game.

TAMUK got a great return on the following safety punt from the UTPB 20-yard line and a 42-yard run back from redshirt freshman Craig Clemons (Corpus Christi, Texas) set up the hosts on the Falcon half of the field. The resulting drive ended up in another turnover on downs, however, as the visitor's defense made the stop yet again.

The next Hog drive saw UTPB come down with its second interception of the day as Jaques Tyler cut off the pass from Dinklemann to give the Falcons the ball at their one-yard line, but the result of this drive turned into a 99-yard touchdown pass from Thomas to Link that squelched any hope of a comeback and a 17-2 final.

Dinklemann finished with 74 yards through the air, 30 of which went to senior Kevin Reynolds (Houston, Texas) on three catches. Redshirt sophomore Christian Anderson (Cypress, Texas) lead the ground game with 67 rushing yards on 19 carries, while Bowen finished with 50 yards on nine attempts.

The Javelina defense forced three turnovers total, two interceptions and one fumble. Junior Derrion Warner (Lilburn, Ga.) picked up one and sent it back 61 yards, while sophomore Isaiah Jacobs grabbed the other.

With the spring season complete the Javelinas turn their attention to the offseason and await a sense of normalcy returning to the NCAA Division II scene ahead of the fall of 2021.