Texas A&M-Kingsville basketball split it's double-header at Cameron with the men winning 92-85 and the women falling 68-50. 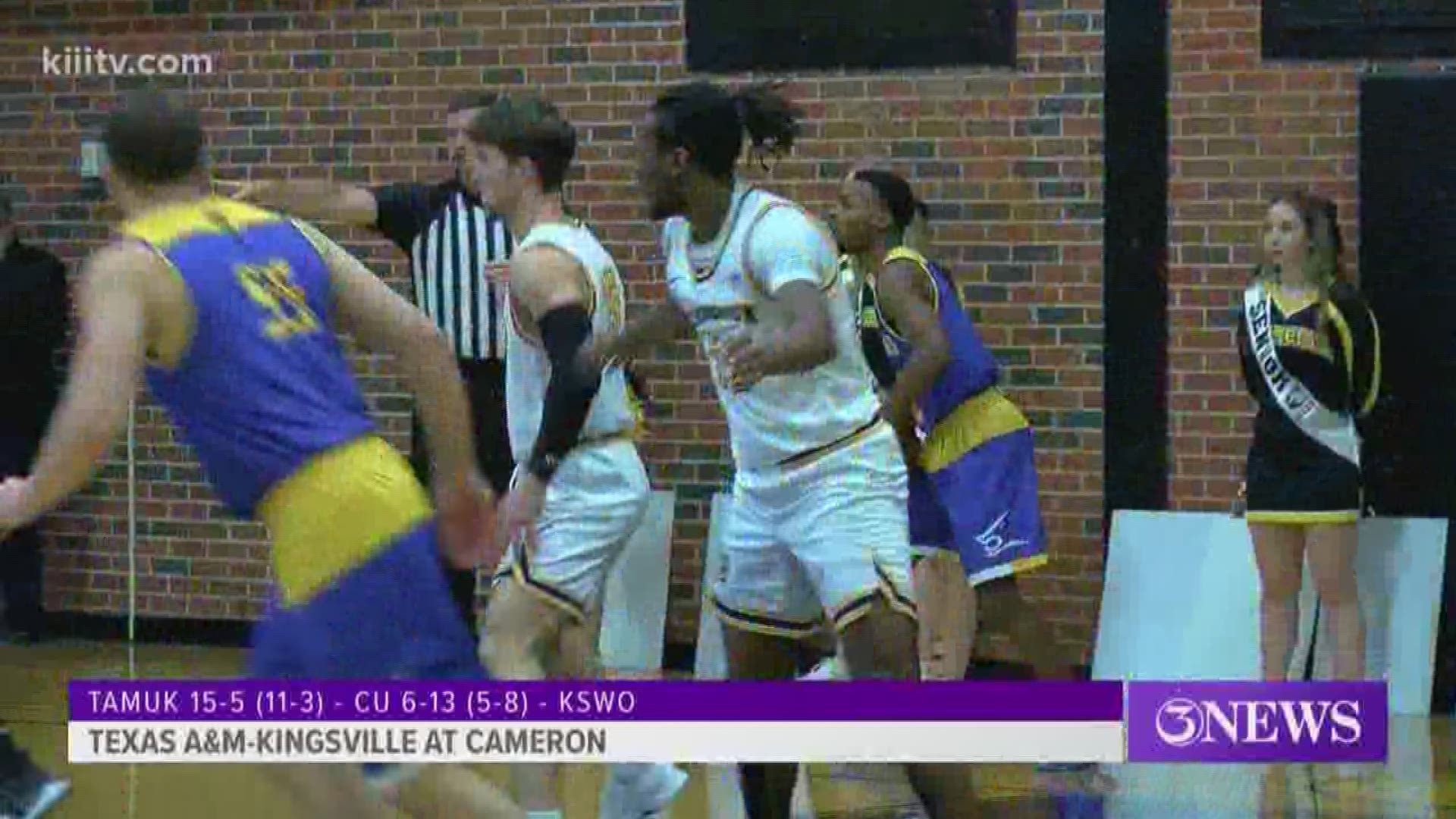 The Texas A&M-Kingsville men's basketball team ran up a first-half lead as large as 23 points, then watched the Cameron Aggies whittle it down to as few as five before holding on for a 92-85 victory on Saturday evening in Lone Star Conference action at Aggie Gym in Lawton, Okla.

The Javelinas have now won three straight and remain in third place in the LSC at 12-3 and 16-5 overall. Cameron owns record of 5-9 in conference and 6-14 overall.

For the first time all season, the Hogs had five players reach double figures in scoring, topped off by senior John Mouton (Missouri City, Texas), who poured in a season-high 19 and swished all six of his free throw attempts. He also grabbed a team-high seven rebounds.

"We had five guys in double figures," said Estelle, "which is a first for us this year. John Mouton, Tre Flowers and Rashon Thomas all played well. We had 15 assists, which reflects that we were moving the ball at a high level tonight. That's promising for the future."

Through the first 20 minutes, it was all Javelinas. They held their hosts to a shooting percentage of 33.3 while hitting 44.7 percent of their shots. With the score at 8-7 and 16:19 on the clock, junior Dayante McClellan (Austin, Texas) strung together a three-point play and Avery tacked on two to put the Blue and Gold up by six. With the score at 18-13 a few minutes later, seven straight TAMUK points, including a Flowers three put the visitors ahead 25-13.

Cameron was within nine with 7:59 to play before the Javs put together their longest run of the night. They used an 11-2 stretch, during which time Flowers and junior Jamell Bradley (Converse, Texas) drained treys, to push their advantage to 39-20 with less than four minutes before halftime. Following two Aggie free throws, the Javelinas put up eight of the period's final 11 points, six of them coming from Chayer, to head to the break up 47-25.

The Aggies didn't dissipate the Hogs' lead immediately in the second half. With 10:56 left, Rashon Thomas buried a triple to put the score at 68-47, but that's when CU started their rally. They began by scoring nine straight points to get within 12 with more than eight minutes still to play.

Over the next six minutes, the Aggies couldn't get closer than 10 points and Chauncey Thomas restored his team to a 15-point edge with two from the charity stripe as the clock was at 2:12. The next seven points came from CU and after Chauncey Thomas hit 1-of-2 from the foul line to make score 83-74, Brock Schreiner knocked down a three to put the home team's deficit at six.

It would be free throws that would preserve the Javelina lead, however. Flowers, Mouton, McClellan and Chauncey Thomas combined to hit 9-of-10 foul shots in the game's final minute and end Cameron's comeback hopes.

Three straight games at the Steinke Physical Education Center are up next for the Hogs, who will start by entertaining St. Mary's on Thursday at 7:30 p.m.

The Texas A&M-Kingsville women's basketball program faced the tough task of taking on the third-best scoring team in the Lone Star Conference on Saturday at Aggie Gym, but couldn't find the winning combination as Cameron handed out the loss in league action at 68-50.

"Cameron is a great shooting team," said head coach Michael Madrid. "I thought our team fought for 40 minutes today and they continued to do the things we've asked them to do. That is the sign of a winning culture."

The Javelinas (4-13, 3-12 LSC) were matched early with the Aggies (9-11, 8-6 LSC) before the hosts connected for a 14-2 run in the opening quarter and never looked back en route to the decision. The visitors held the slim margin at 6-5 with 7:21 showing on the clock, but a three-pointer from Ava Battese ignited the run that set the score at 19-8 with 2:25 remaining in the quarter.

The 24-12 score favoring CU was soon pushed to a 19-point gap in the second as the trey from freshman Madison Lucas (Houston, Texas) put the score at 35-19 at the 3:01 mark, while a 6-2 run to close out the half for the Blue and Gold narrowed the deficit to 14 as the Aggies took the 39-25 advantage into the locker rooms.

Junior Anastacia Mickens (Beaumont, Texas) opened the scoring for the Javelinas in the second half with a mid-range jumper, but every shot from the visitors was summarily matched by the hosts as the Aggies extended their lead to 56-35 going into the final frame.

The fourth was more of the same with CU matching TAMUK shot-for-shot before eventually taking the win at 68-50. Mickens poured in her team-high 15th point with a driving layup at the 2:25 mark while redshirt sophomore Bri-Anna Soliz (San Angelo, Texas) tallied the final four points of the game to push her total to nine.

Soliz ended up with 11 rebounds to her total, just missing out on her first double-double of the year, while Mickens shot 7-for-10 from the floor and added seven boards of her own to go with one assist, one block and one steal.

Freshman Maeghan Palmer (Midlothian, Texas) posted a new career-high in two categories in the loss as she finished with eight points and seven rebounds.

The Javelinas are back at home next week as they take on St. Mary's for Residence Life Night at the Steinke Physical Education Center on February 6 with tip-off at 5:30 p.m. CT.