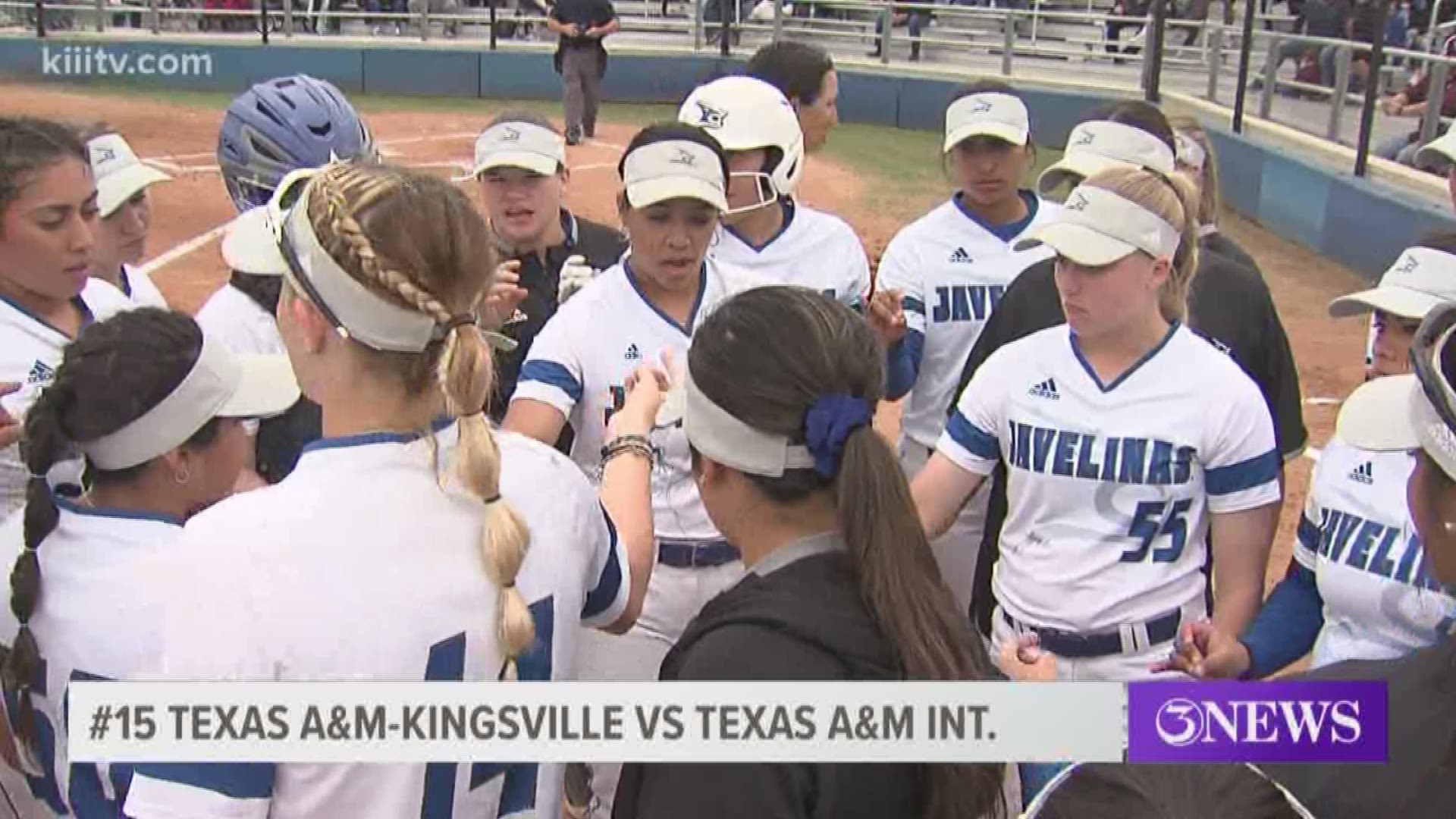 Kelly now has 93 career stolen bases, surpassing the previous mark of 90, which was set by Cassie Anderson and had stood since 2010. This comes less than a year after she shattered the school record for stolen bases in a season, swiping 41 in 2019.

The Javelinas got on the board quickly to start the day, when sophomore Jory Cervantes (Pflugerville, Texas) reached on an error, moved to second on a wild pitch, stole third and scored on a groundout.

A walk and a single started TAMUK's half of the second, followed by a double steal. Sophomore Jackie De Los Santos (Kingsville, Texas) brought in one run with a sacrifice fly before a single and an error tallied sophomore Makenzie Mays (Conroe, Texas) for a 3-0 edge. Another of TAMUK's sophomores, Matisen Onofrei (Mesa, Ariz.) singled in her teams' fourth run in the third.

In the fourth frame, the Javs rattled off six runs in a rally that began with a pair of hits and a sacrifice. A knock from Kelly sent one run across and she quickly stole her record-breaking base. Following a walk, junior Anastasia Leibas (Del Valle, Texas) lined a two-run single through the middle to make the score 7-0, then she watched her team pack the sacks again. This time, it was Mays who came through, peppering the left field corner with a three-run double for a 10-0 edge.

Freshman Saidi Castillo (Kingsville, Texas) easily completed the run-rule win with a scoreless fifth. In throwing her second shutout of the season, Castillo only allowed two hits, didn't walk a batter and struck out seven.

It was the Dustdevils who got on the board first in game two, scoring all of their runs during a third-inning uprising in which they batted around. A walk followed by an error allowed the first two hitters to reach and the next three batters all singled, scoring three runs to break a scoreless tie. Victoria Mal then proceeded to double in TAMIU's fourth run and a Heather Ruiz sacrifice fly put the score at 5-0.

The home team immediately got a run back in the third on a sacrifice fly courtesy of sophomore Yvonne Castillo (Leander, Texas), but that was all they would get until the sixth. In that frame, Cervantes beat out a bunt hit and raced home when Leibas plugged the gap in right-center with a double. Three batters later, Mays singled in her fourth RBI of the day, but that would be the last Javelina hit of the day, as the last four batters were retired in order.

"Today's a microcosm of our season," said coach Craig Nicholson. "We were so inconsistent. We come out in the first game and did a lot of things at a high level and it was like a different team out there in the second game."

On Friday, the Javelinas will be in San Antonio, playing their first conference games of the season in a doubleheader against St. Mary's that will begin at 5 p.m. You can keep up with everything related to Javelina softball all season long by following @TAMUKSB on Twitter, @JavelinaSports on Twitter and Instagram, like Javelina Sports on Facebook and subscribe to the Javelina Athletics YouTube Channel.