Texas A&M-Kingsville lead in sets 2-1 before falling in five to Angelo State Tuesday. 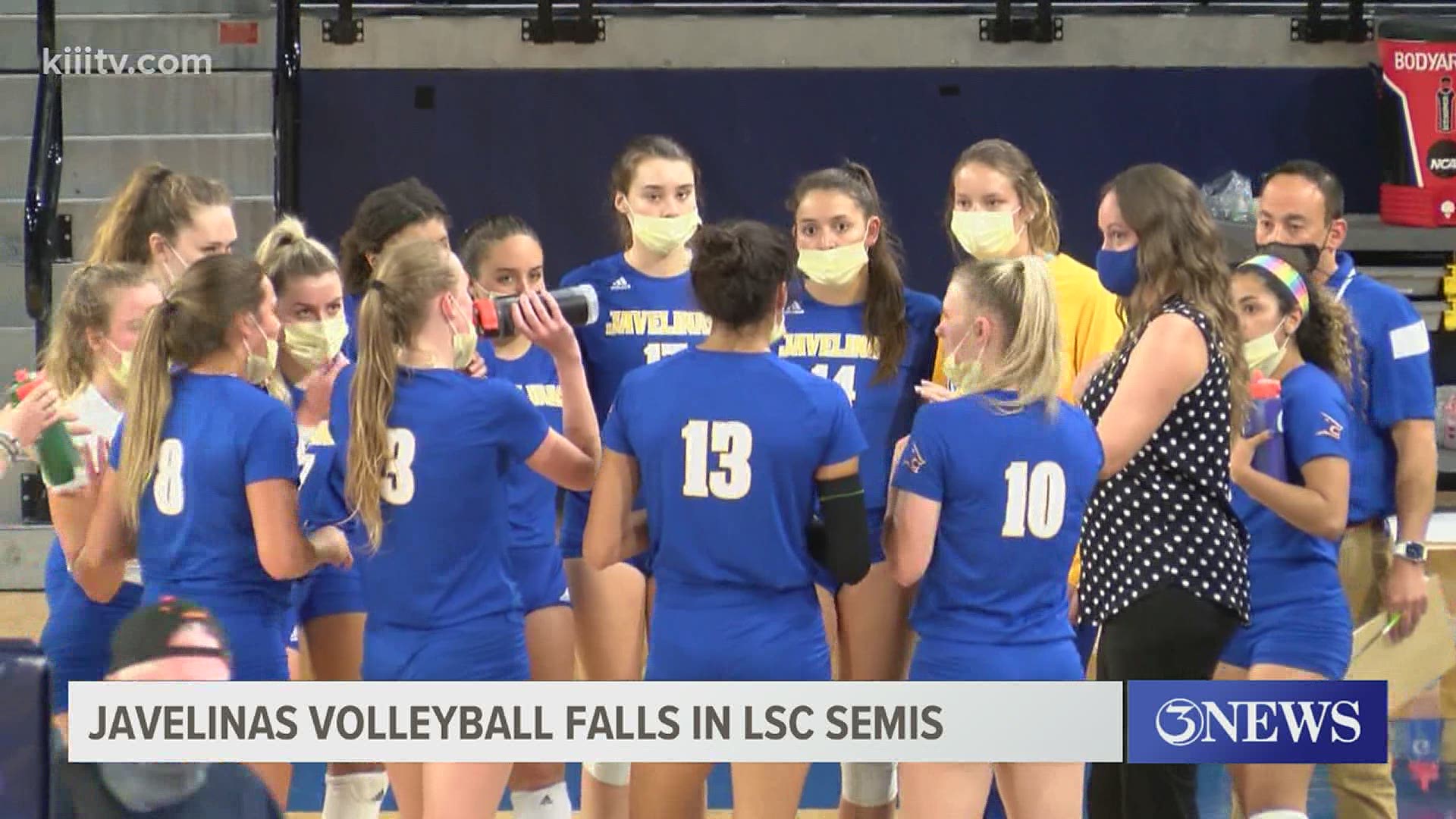 "I'm very proud of my team," said coach Tanya Allen. "I thought, defensively, we were phenomenal. We blocked a lot of balls, we dug a lot of balls. We struggled in offense a little bit here and there, but overall I'm extremely proud."

Jackson finished the match with five solo rejections, just one off the program record that's been reached three times, most recently by Heidi Scheopner in 2007. Jackson added four block assists to finish the match with nine total blocks.

Murff's 28 digs were a match-high, tied for her second-most in 2021 and were only two off her season-high. Junior Emily Witt (Rose Hill, Kan.), who had 34 assists and 13 digs, caps a spring campaign in which she piled up 12 double-doubles in as many matches. Sophomore Kelsi Luckenbach (Calallen, Texas) fired off 14 kills, tied for the most in the contest.

The opening set was controlled by the Rams, who held the Javs to a .000 hitting percentage on 30 attacks. ASU jumped out to an 8-3 lead and later used an 8-2 run to push their advantage to 20-10. The Javelinas managed to close within seven, but their opponents then rattled off five-in-a-row to close the game.

In the second, ASU again took the initiative, going ahead 6-1, before four straight scores by the Javelinas. With the Rams leading 10-7 moments later, the Javs put together a stretch in which they took 12 of 15 points to go up, 20-13. The closest the Rams could get after that was three points before a smash from Jackson provided TAMUK's 25th point.

The Blue and Gold held ASU to a .055 kill rate in the third set while grabbing the lead. Trailing 4-3, the Javelinas took seven of the next nine rallies for 10-6 advantage. The Rams bounced back to take leads of 18-15 and 22-20, but that is when the game turned. A rejection by Jackson triggered a 5-0 Javelinas run, capped off by a finisher from Witt that clinched a 2-1 TAMUK edge.

A 10-0 burst by the Rams in the fourth set gave them an insurmountable 14-3 advantage and they cruised the rest of the way, hitting .385 for the frame. An attack error by the Javs put up ASU's 25th point and sent the match to the final set.

The first two points of the last frame went to Angelo State and they kept the Javelinas at arms-length for much of the set. TAMUK used three consecutive points to even things at eight, only to watch the opposition win four of the next five. The Javs couldn't get closer than two points after that before the Rams' 14th block of the evening clinched the match.

"Hold your head high and remember this sting," Allen said she told her team after the game. "We have to expect to be in these situations instead of being surprised at how good we were. I think they should expect to be that good and use this as momentum into the fall to push over the summer, work hard and continue to get better."