Texas A&M-Kingsville (13-0) stayed perfect on the season by advancing to the tournament semifinal. 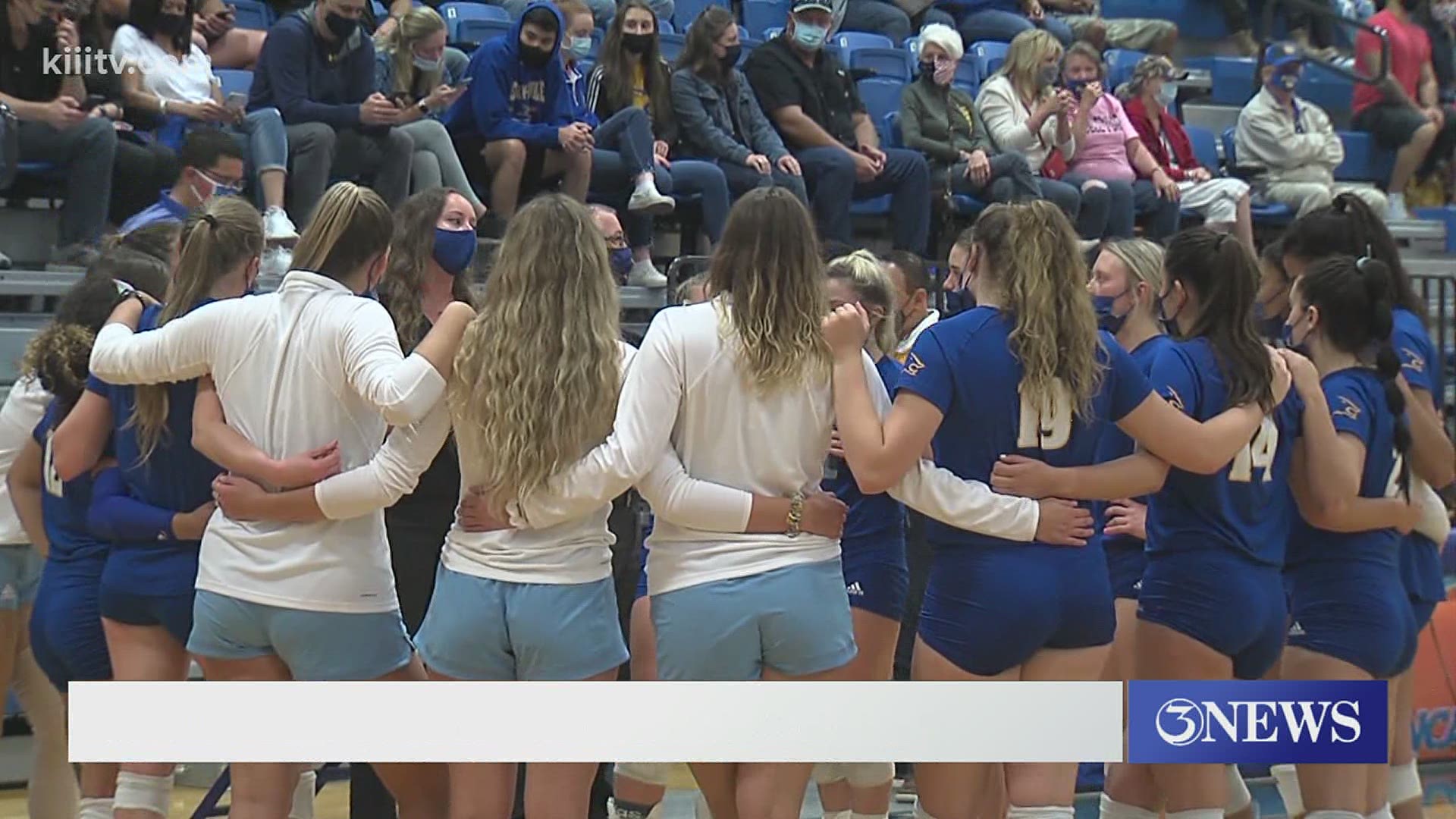 KINGSVILLE, Texas — The No. 6 Texas A&M-Kingsville women's volleyball team piled up 17 blocks and held the Texas A&M-Commerce Lions to a season-low .069 hitting percentage on their way to a 25-15, 25-20, 25-20 sweep on Wednesday night in the LSC Tournament Quarterfinals at the Steinke Physical Education Center in Kingsville, Texas.

"We did a great job of identifying the hitters on the other side," said coach Tanya Allen. "They were jumping really high and they were pressing their hands over the net. We caused a little bit of commotion on the other side."

"We just pressed and tried to close and have big hands," said Jackson. "That's where we struggled throughout the season. We knew, this game, if we're going to go further, defensively across the net, we've got to press."

For the 11th time in 2021, junior Emily Witt (Rose Hill, Kan.) posted a double-double, finishing with 28 assists and 11 digs, leading the Blue and Gold in both statistics.

Neither team gained much separation early in the first set, but the Javelinas dominated a stretch in which they took 10 of 11 rallies to earn a 22-11 lead. That run included three kills from Jackson and a pair of Morris aces. The Lions would cut their deficit to nine before freshman Allison Stachowiak (Brownsville, Texas) put an attack in the right spot for her team's 25th point.

Again in the second game, the Lions and Javelinas spent plenty of time trading scores before Jackson rattled off three straight points on a 4-0 run to boost the home team's lead to 17-12. After the Javs extended their edge to 23-16, four-in-a-row for A&M-C allowed the visitors to creep within three. Stachowiak and sophomore Tammy Jo Grohman (San Antonio, Texas) made sure that was where the comeback attempt ended, however, each firing off a kill to lock up a 2-0 lead.

The Lions' attempt to thwart a sweep started with them jumping out to a 6-3 in the third set, but two Morris kills and two Jordan Schenkel (San Antonio, Texas) aces keyed a 7-0 TAMUK burst. The Javelinas' advantage eventually reached six at 16-10, only for A&M-C to come back with six straight scores of their own. TAMUK's response was to take five of the next six rallies, keyed by a kill and two rejections from Estrada. After three exchanges of point to push the score to 24-20, one more Javelina block, this one courtesy of sophomore Kelsi Luckenbach (Calallen, Texas) brought the evening to a close.

The next task ahead for the Javs is an LSC Tournament semifinal matchup with Angelo State on Tuesday. Keep up with Javelina volleyball all season long by following @Javelina_VB and @JavelinaSports on Twitter, @JavelinaVB and @JavelinaSports on Instagram, liking TAMUK Volleyball on Facebook, subscribing to the Javelina Athletics YouTube Channel and visiting Javelinaathletics.com. Watch your Javelinas live today on the Javelina Sports Network sponsored by Mendoza's Pharmacy.