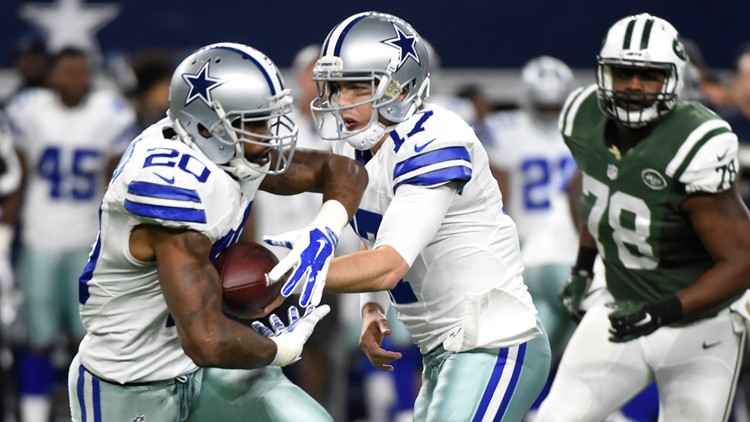 Photo by: AP
Dallas Cowboys' Darren McFadden (20) takes the hand off from quarterback Kellen Moore (17) in the first half of an NFL football game against the New York Jets on Saturday, Dec. 19, 2015, in Arlington, Texas. The Jets' Leger Douzable (78) watches the exchange. (AP Photo/Michael Ainsworth)

Memory Lane: Kellen Moore debuts at quarterback against Jets in 2015

The last time the Dallas Cowboys played the New York Jets, Kellen Moore replaced quarterback Matt Cassel midway through the game. The Cowboys were a sad sack of a 4-9 club without Tony Romo while the Jets were an 8-5 club staying competitive in the hotly contested AFC wild-card race.

Flashback to four years ago on Dec. 19, 2015. Unlike this Sunday, swap out MetLife Stadium for AT&T Stadium and the chilly October winds from Mother Nature for the climate-controlled confines of Jerry World. Strangely, Jim Nantz is still the play-by-play on television, but Phil Simms was the color commentator and not Romo.

Even though the Cowboys were assuredly going to finish below .500, they were miraculously not yet mathematically eliminated from the playoffs. The other three teams in their division were 6-7 apiece. To put it simply, if the Cowboys won out, and the rest of the division lost out, Dallas would win the NFC East with a 7-9 record. It would be one of the most masterful coaching jobs if Jason Garrett led the Cowboys to an NFC East crown with quarterback Tony Romo lost for the year with a broken collarbone.

The Jets similarly needed to win out. They were keeping pace with the Pittsburgh Steelers and Kansas City Chiefs, both 8-5, for the final wild-card spot. The New England Patriots were 11-2 and weren't about to lose all three games and invite the Jets an opportunity to win the division for the first time since 2002. Nonetheless, making the playoffs under first-year coach Todd Bowles, an ex-Cowboys assistant, and journeyman quarterback Ryan Fitzpatrick would be quite the accomplishment and signal the Jets were turning things around.

Dallas jumped out to a 3-0 lead on the Jets after Dan Bailey kicked a 27-yard field goal. Of course, it was punctuated by the fact the Cowboys were having trouble in the red zone. On a third-and-4 from the New York 9-yard line, Cassel couldn't find receiver Terrance Williams, and Dallas had to settle for a field goal. On the ensuing drive, the Dallas defense turned the Jets three-and-out.

Just as it seemed the Cowboys were kicking it into high gear, the lug nuts started unscrewing and the vehicle rumbled.

On a second-and-17 from the 50-yard line, Cassel, who grew up a Cowboys fan in West Texas, chucked a lifeless interception into the arms of cornerback Darrelle Revis. What's worse is that he was actually trying to throw it away. To add insult to injury, referee Craig Wrolstad penalized Cassel for intentional grounding.

The wheels had come off the car.

It just got worse after that point. The Jets cashed in on the turnover with a 12-yard Bilial Powell touchdown run to go up 6-3 with the extra point no good. Then, Cassel lost it completely on the ensuing drive. He took a 19-yard sack on second-and-11, creating a third-and-30 from the Dallas 14-yard line. The last play of his Cowboys career was a 17-yard completion to tight end James Hanna on that third-and-30.

After Dallas turned New York three-and-out, it was the Kellen Moore Show.

The former Boise State standout's first play was a throw to Williams for a loss of a yard. Then, on second-and-11, he saw Williams streaking down the deep middle of the field, delivered a strike, and safety Marcus Gilchrist knocked it out of the park with an interception. The Jets turned that into a 36-yard Randy Bullock field goal to go up 9-3.

Dallas wasn't out of it with Moore in his first career NFL action. They traded three-and-outs with the Jets before Moore got it back with 1:47 before halftime at the Dallas 45-yard line. Moore led the Cowboys on a four-play, 55-yard drive that ended with a 10-yard touchdown pass to receiver Dez Bryant. The Cowboys trailed 10-9 with 1:25 until the break.

Where had that been ever since Romo broke his collarbone on Thanksgiving?

Bullock added a 40-yard field goal before halftime, or so they thought. An illegal shift pushed the kick back to the 45-yard line, and then Bullock missed the attempt to give Dallas a one-point lead at halftime.

After the Cowboys stopped a long Jets drive coming out of the locker room, Moore attempted to get Dallas insurance points. However, it was the middle of the field and feeding playmakers that got Moore in trouble again. On a second-and-goal from the 6-yard line, Moore threw an interception to safety Calvin Pryor while looking for Bryant. However, in two plays, the Dallas defense canceled the takeaway when Terrance Mitchell produced one of the Cowboys' first picks on the season for a cornerback.

The Cowboys couldn't do anything with the possession other than go three-and-out and allow Bailey to kick a 38-yard field goal and give Dallas a 13-9 lead with 3:49 to go in the third quarter.

With 14:05 to go in the game, Fitzpatrick and the Jets finally put together the drive they needed to take control of the game. With a dynamic receiving corps featuring Brandon Marshall and Eric Decker. Fitzpatrick hit Marshall on two passes for 34 yards and Decker for two passes for 16 yards, including a 3-yard touchdown, to cap off a 70-yard drive and give the Jets a 16-13 lead with 8:51 to go.

If Moore could lead the Cowboys to a go-ahead touchdown and keep their delusional, but mathematical, playoff hopes alive, it would have been magical.

The closest he could get was the Jets' 32-yard line after hitting receiver Cole Beasley for a 5-yard gain on third-and-10. Bailey, as always, nailed a 50-yard field goal, and the game was tied 16-16. It was up to a Cowboys defense that had blown three fourth quarter leads and two overtime scores to find a way to hold.

Receiver Kenbrell Thompkins caught a huge 43-yard pass from Fitzpatrick up to the Cowboys' 26 on the fourth play of the drive, and then it was the timeout game from there. Powell would rush, and the Cowboys would burn their timeouts. On fourth-and-6 from the Dallas 22, Bullock connected on a 40-yard field goal to give the Jets a 19-16 lead.

With 30 seconds to go and no timeouts, all Moore needed to do was get Dallas into Bailey's field goal range. An 8-yard pass got Dallas up to their own 32-yard line with time melting off the clock. The longest attempt of Bailey's career to that point was 56 yards, and he was a 50-50 proposition on that. The miss was on grass in San Diego in 2013, but the make was on turf, much like that at AT&T Stadium, at CenturyLink Field in Seattle of all places.

There would be no miracle and there would be no more math for Dallas as Moore threw his third interception of the game, again looking for Bryant, giving New York cornerback Marcus Williams one of his six interceptions of 2015. Fitzpatrick knelt down, and the Cowboys were eliminated from playoff contention but Moore was at last an NFL quarterback.

What are your fondest memories of the Kellen Moore: Quarterback era for the Dallas Cowboys? Share your recollections with Mark on Twitter @therealmarklane.