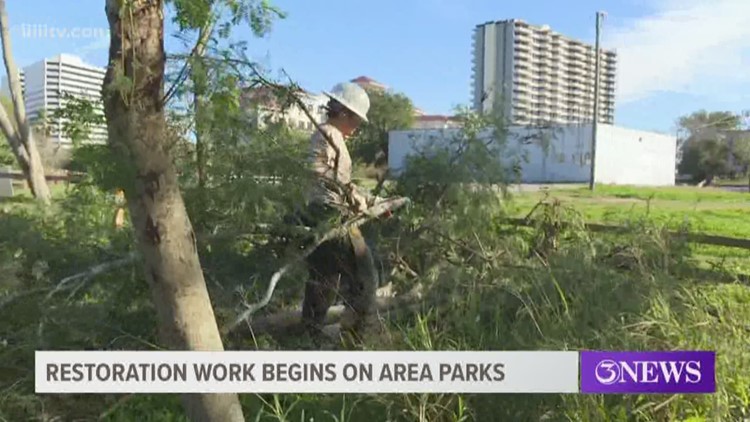 CORPUS CHRISTI, Texas — The City of Corpus Christi is looking to give Blucher Park a real environmental facelift.

It's the latest nature park that has been targeted for the removal of invasive trees, bushes, and grass.

The Blucher family deeded the wildlife nature area to the City of Corpus Christi way back in 1942. Since that time, there's been a lot of non-native plants that have somehow become part of the ecosystem there.

City Councilwoman Paulette Guajardo put on a news conference Thursday to announce the start of the work that's now going on there.

The American Conservation Experience is under contract by U.S. Fish and Wildlife, and one of their tasks is to transform Blucher Park to a 100-percent native plant paradise.

Blucher Park has served as a hotspot for those birds who are native to our area as well as those migratory birds who use it as a stopover.

The City is now working to clear out those non-native plants and try and turn Blucher Park into an even more attractive place for birds and humans.

"Birds like structure. They like a multi-tiered structure" said Dan McLendon of the American Conservation Experience. "Big trees, middle size understory, and smaller understory as a resource to new and tropical migrating birds they need that."

Some of the trees, like the white lead tree, have already been removed. The white lead looks like a mimosa tree but it's not native to South Texas.

Officials said there are probably around 100,000 non-native trees and maybe over 200,000 of the seeds dropped by those plants.

The initial effort will last around six weeks, and it is part of this project that will continue on for years.

The American Conservation Experience expert said the job of clearing out non-native plants will take years because of the seeds, which have been dropped over the years and will continue to produce new plants in the future.