Sheriff Ed Gonzalez says it does not appear that the 18-wheeler can be safely moved Thursday. The submerged truck will remain in place overnight.

HARRIS COUNTY, Texas — The I-10 East Freeway was closed heading west/inbound after an 18-wheeler went off the bridge into the San Jacinto River early Thursday, according to Harris County Sheriff Ed Gonzalez.

The crash and closure happened shortly before 4 a.m.

At about 4:15 p.m., the Texas Department of Transportation reopened the westbound lanes of the East Freeway.

TxDOT said the westbound ramp from Crosby-Lynchburg will be closed until further notice for repairs.

The search for the big rig driver ended Thursday evening. The HCSO Marine Unit, HazMat team, Crosby firefighters and the U.S. Coast Guard were are all involved in the search.

Investigators say that there is no indication that anyone escaped the big rig after it went into the water and are investigating the incident as a fatal crash.

The sheriff says it does not appear that the 18-wheeler can be safely moved Thursday. The submerged truck will remain in place overnight into Friday.

He added that a private vendor will join the effort to raise it on Friday.

HOW DID THIS HAPPEN

Investigators say a Harris County Sheriff’s deputy pulled up on scene after a Chevrolet Cavalier was involved in a minor crash with another 18-wheeler that did not stay at the scene. The crash sent the Cavalier into a spin into from the eastbound lanes into the westbound lanes.

A description of the first 18-wheeler that did not stay at the scene was not available.

Credit: Air 11
A Chevrolet Cavalier was involved in a crash that sent a big rig into the San Jacinto River.

The 18-year-old driver and 23-year-old passenger, both males, exited the Cavalier after the crash. The deputy noticed the car did not have lights on after the crash making it a road hazard. 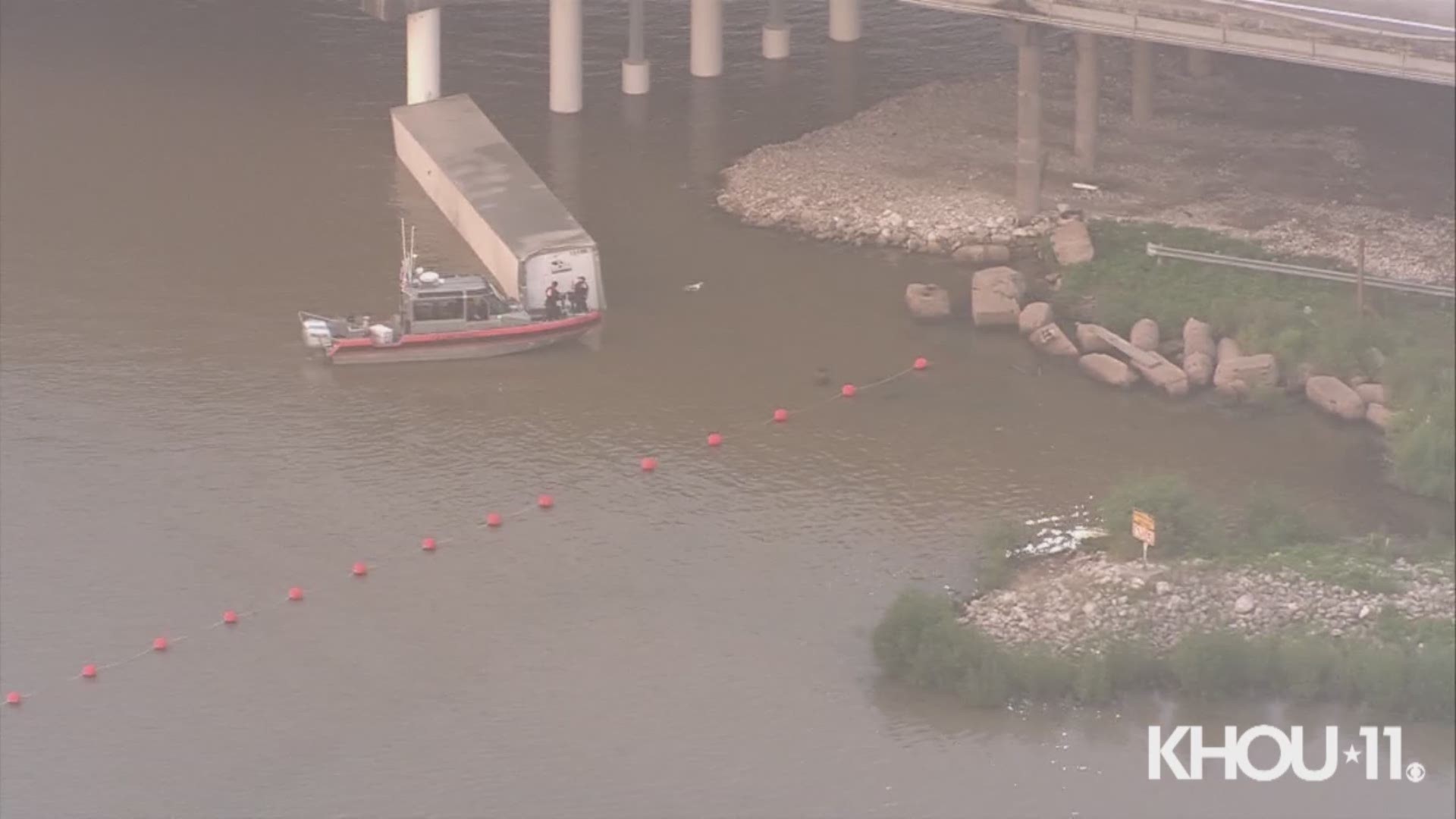 Investigators say that is when the other 18-wheeler heading westbound came and crashed into the disabled Cavalier. That collision resulted in the big rig driver over-correcting and crashing through the guardrail into the San Jacinto River.

The river is anywhere from 20 to 30 feet below the bridge depending on where you are on the bridge.

The sheriff says that the cab jackknifed and went straight down into the river completely submerged while the trailer is partially submerged sitting upright.

The rig is stuck in silt and is submerged in about 15 to 20 feet of water.

He added that they have not seen any "evidence of life" in the cab and that the driver was likely in the sleeper cab of the truck.

The sheriff explained that the process of raising the 18-wheeler is complicated and the truck is difficult to access. They were initially looking at utilizing a crane or a barge to raise it, but are now waiting until Friday to bring in a private vendor to help raise it.

The trailer was 90 percent full of plastic crates, the sheriff said. It is also full of water complicating the process of raising the truck even more.

WILL ANYONE BE CHARGED?

The deputy that responded to the original crash and the two occupants of the Cavalier were not injured in the second crash. The driver of the Cavalier was not impaired at the time of the initial collision and is cooperating with the investigation.

There are no pending charges at this time. 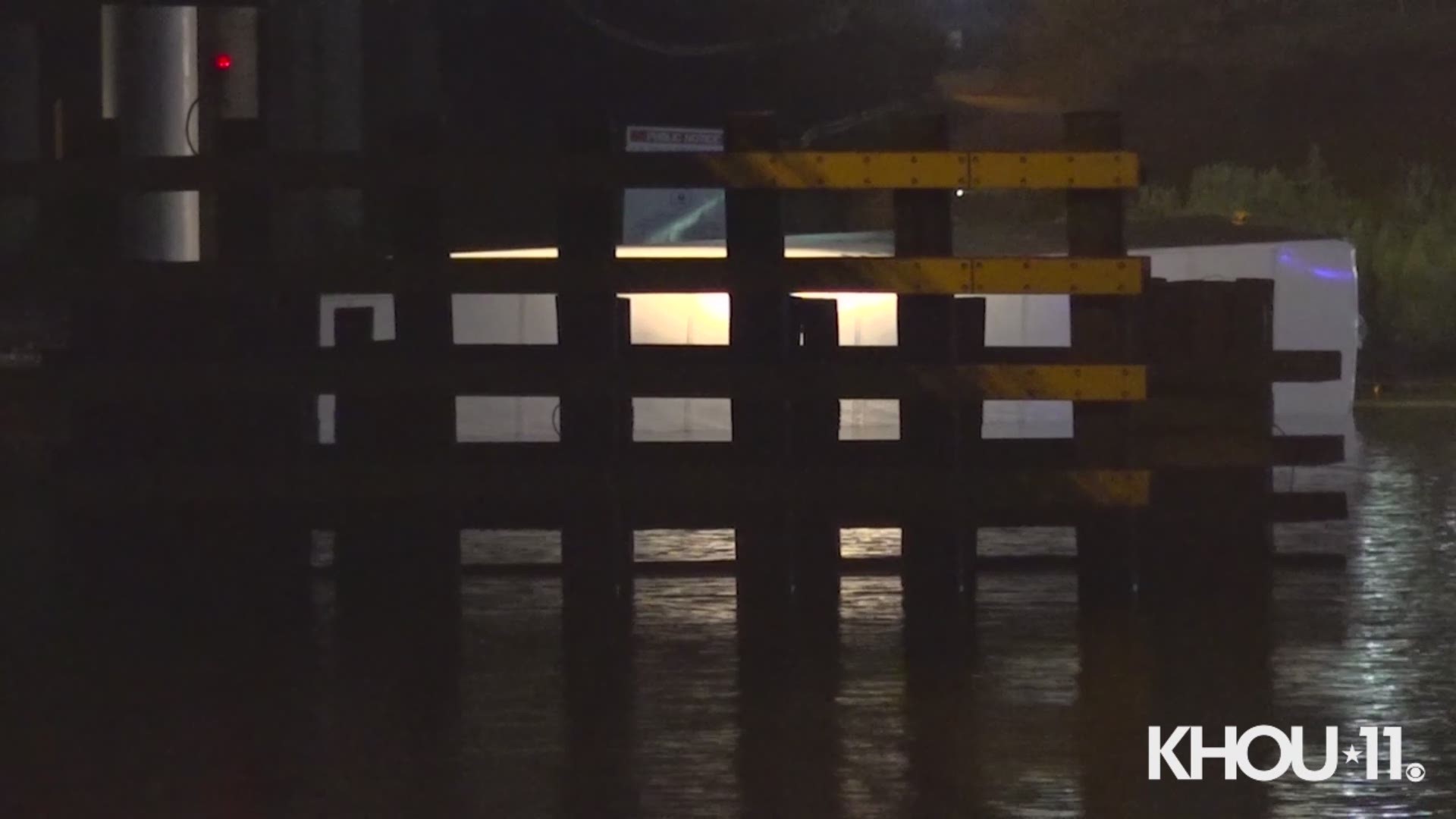 Deputies are also waiting for officials from the Texas Department of Transportation to come and inspect the area impacted by this morning's crash since it had been the site of a recent crash and repairs.

The sheriff says westbound lanes at 2100 are shut down. Traffic is being diverted north to Highway 90 or south to Spur 330/State Highway 146.

Credit: OnScene
The I-10 East Freeway is closed heading west/inbound due after an 18-wheeler box truck went off the bridge into the San Jacinto River early Thursday, according to Harris County Sheriff Ed Gonzalez.

If you are heading to Beaumont, it does not look like the crash is affecting your route yet.

Motorists can expect the westbound lanes of the East Freeway to be closed for several hours. 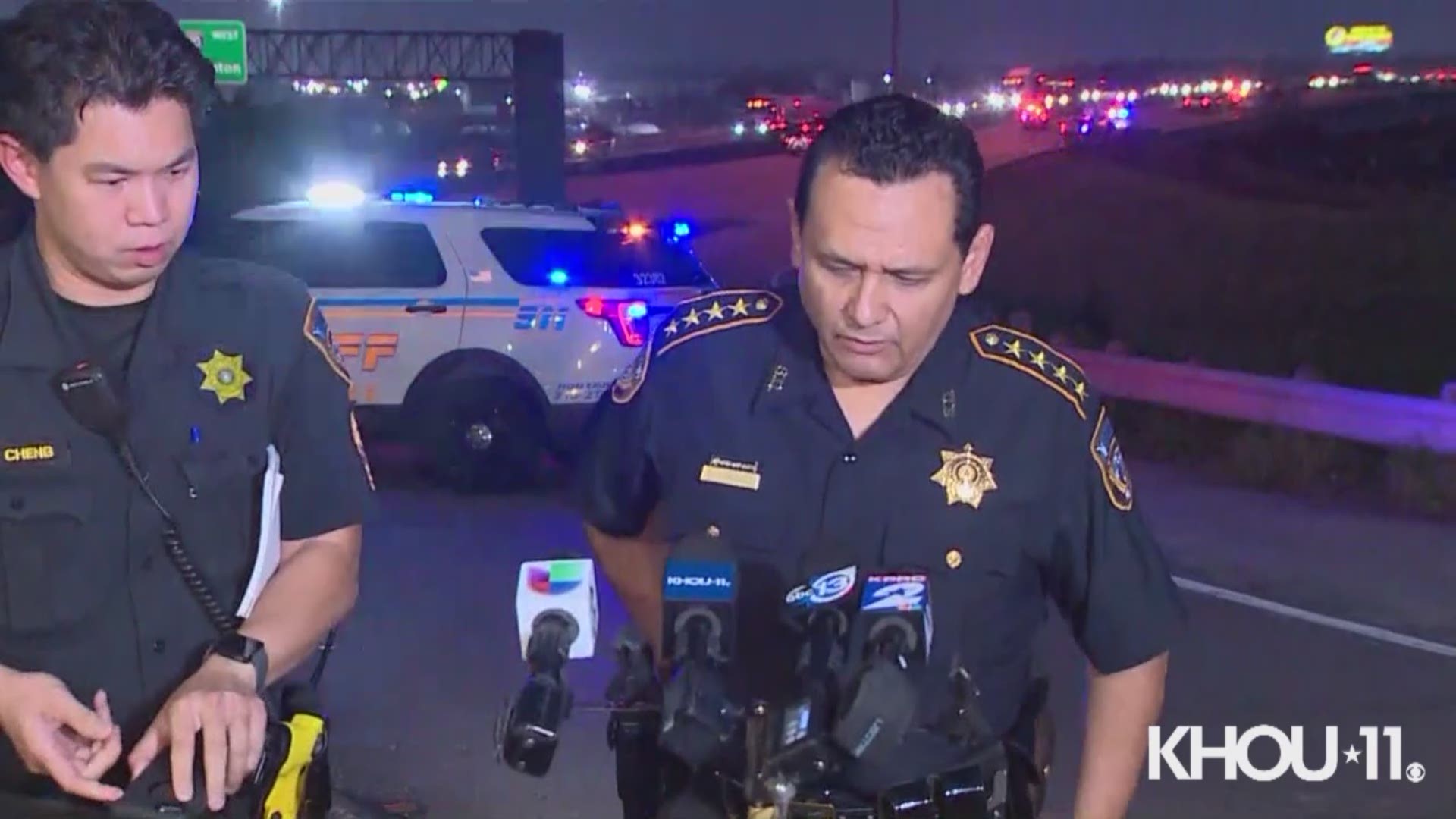