Our news team is answering your questions about levees, road closures, public services and more. 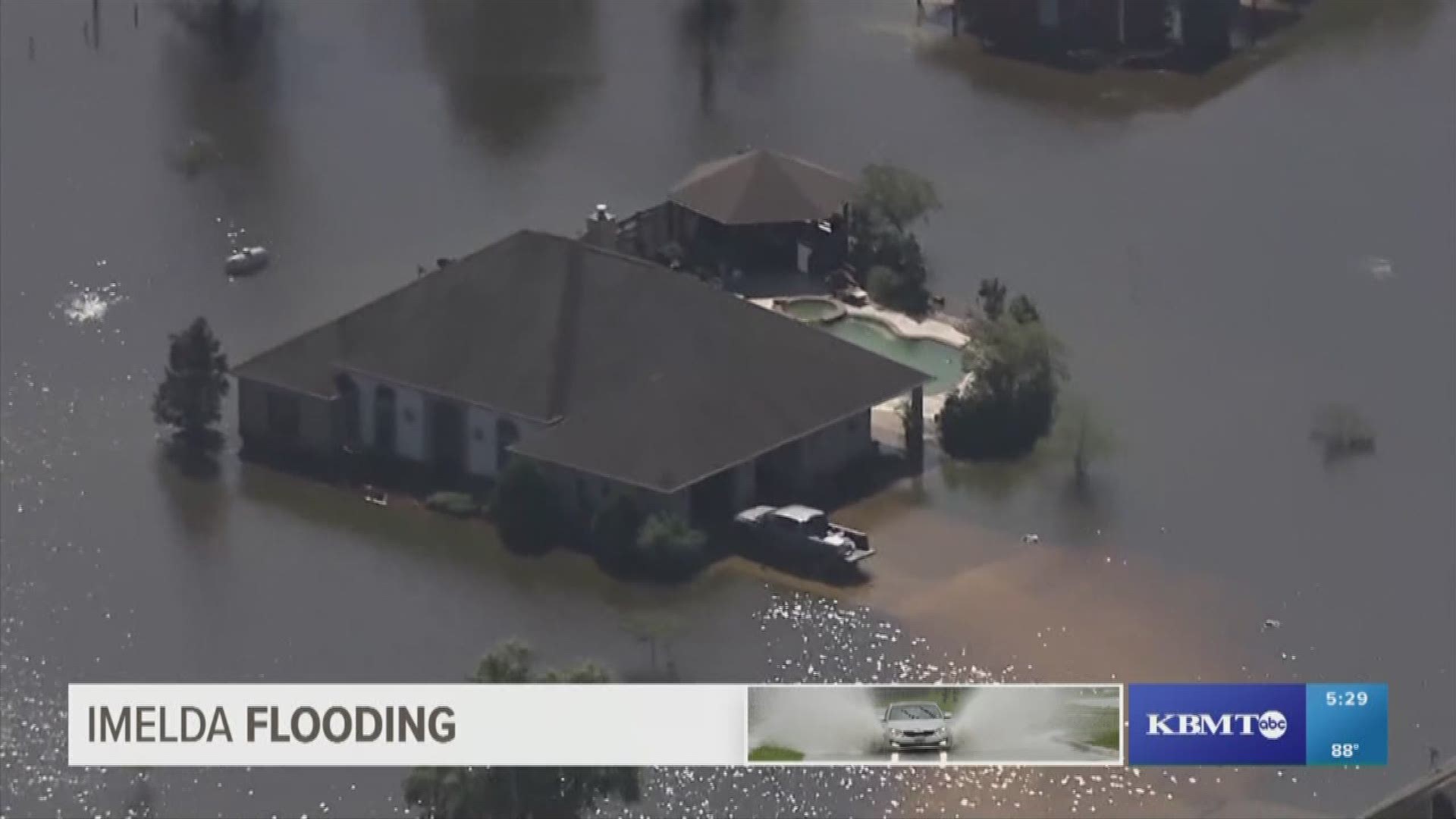 BEAUMONT, Texas — The 12News team is getting answers to questions circulating on social media as Southeast Texas wakes up to the aftermath of Imelda. Here are some of the biggest questions we're seeing and what we're hearing from officials.

Interstate 10 between Beaumont and Winnie opened back up in both directions Sunday afternoon.

In a tweet at about 12:50 p.m. the Texas Department of Transportation announced that the roadway was completely open in both directions.

The interstate does remain closed in Houston at the Crosby Lynchburg Road bridge which was struck by a loose barge. The interstate will be closed there until the bridge can be inspected according to TxDOT.

Several places along I-10 are still holding water and are restricted to one lane.

What are current river and bayou levels in the area?

Moderate flooding at the B.I. Pump Plant along the Pine Island Bayou. Current level is 17.2 Ft...Flood Stage is 11 Ft.

Major flooding is occurring along Cow Bayou at Mauriceville. Current level is 22.3 Ft...Flood stage is 17 Ft.

Major flooding is occurring at the Salt Water Barrier along the Neches River. Current stage is 8 Ft...Flood stage is 4 ft.

Major flooding is occurring along the Pine Island Bayou at Sour Lake. Current level is 33.9 Ft...Flood stage is 25 Ft.

According to Dist. 22 State Representative Joe Deshotel (D) as of Saturday morning our area has an estimated $3 million reported in Public Assistance damages, but there needs to be $37.7 million for individual assistance. Deshotel says that's about 800 homes with 18” or more of water that do not have insurance. He said there has already been over 2400 insurance claims and only 300 reported without insurance. He said FEMA teams will be here Monday to do additional assessments, and state teams are already working with our local partners to gather additional damage data.

None yet, and this is why. There are three steps required before FEMA assistance is available according to Chambers County Emergency Management. First, the local jurisdiction has to issue a disaster declaration and send to the governor, which Judge Sylvia did on the 18th. Secondly, Governor Abbott has to issue a state declaration and send this to the president, which he has. Thirdly, the president has to make a declaration, which then opens the door to potential FEMA assistance. As of Sunday, this declaration has not happened. It does not mean it will not happen, it means that information and damage reports are being compiled by the state to send to the president.

I left my car during the flood and it was towed. What do I need to do?

If your vehicle was abandoned in the roadway in the City of Beaumont due to flooding or traffic issues, it will be towed. Contact Beaumont Police Dispatch on their non-emergency phone line 409-832-1234 to find out where your vehicle was towed. Have your license plate number ready.

If your car was towed in Jefferson or Chambers County, these are the wrecker services used to clear abandoned vehicles from I-10 east and west between Beaumont and Winnie.

How many people were rescued during Imelda?

Beaumont Mayor Becky Ames said crews responded to 7,500 calls with 700 rescues and 1,400 evacuations. An official with Beaumont Fire-Rescue said there are 240 people at a city-run shelter in the gym of the former Central High School. The total number of people in shelters across the area has not been updated as of 11 a.m. Saturday.

According to Allison Getz, there were 1,192 rescues in Jefferson County. There are currently 380 people in shelters throughout the county.

12News spoke to Phil Kelley, General Manager of Jefferson County Drainage District 7. He said all pump stations are all operating. He said this includes the Alligator Bayou pump which handles about 60 percent of the district.

How do I report price gouging?

Price gouging is illegal, and the Office of the Attorney General has the authority to prosecute any business that engages in price gouging after a disaster has been declared by the governor.

If you suspect price gouging, click here to report it to the Attorney General's office.

Was the Stiles Unit flooded?

Several people asked if there had been flooding at the Mark W. Stiles Unit in Beaumont. 12News contacted Jeremy Desel Director, Communications Texas Department of Criminal Justice. He said there has been no flooding at any of the Beaumont area units.

What public services are operational?

Beaumont officials said they plan to open most public offices Monday, September 23. Trash pickup will begin Monday, while crews will start clearing debris in Beaumont on Sunday. All storm debris should be placed on the curb for pickup.

The City of Port Arthur Transit (PAT) will have no service to clients (including para-transit) using Route 5, which includes Heatherbrook Apartments, and portions of the Stonegate area due to high water. Please be aware that all other public services are fully operational as of Friday morning.

Flooded home? Here's how to get started with cleanup and insurance