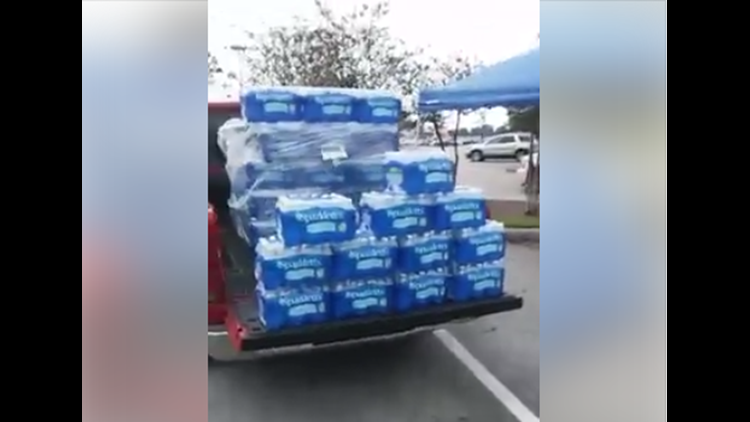 A screenshot of a Houston man's Facebook live where he accused another person of price gouging ahead of Hurricane Harvey.

In the video posted to Facebook, a Houston man accuses another person of selling cases of water for 500% more than it's worth.

A Houston man turned to Facebook Live while confronting a person who he believed was involved in price gouging ahead of Hurricane Harvey.

Marcus Griffin posted video on his Facebook early Friday afternoon of the encounter in a Walmart parking lot in Houston.

In the video, a few dozen cases of water can be seen in a truck bed and under a tent, Griffin then accuses a man holding up a sign advertising 'water' of selling the product for 500% more than it's worth.

The unidentified man responded that Griffin has no idea how much he bought it for and suggested he go to the Exxon station to see how much they were charging for water.

LINK: How to file a complaint if you suspect price gouging

Price gouging is illegal in Texas and the Attorney General's Office has the authority to prosecute any business that price gouges after a disaster has been declared by the governor.

If you suspect someone of price gouging, the Attorney General's office suggests raising the issue with the provider and speak to them respectfully but be frank. If you can't resolve the matter, you can file a complaint on the state's website.