A commission by Texas Governor Greg Abbott released a 175-page report Thursday with recommendations to the Legislature after Hurricane Harvey. 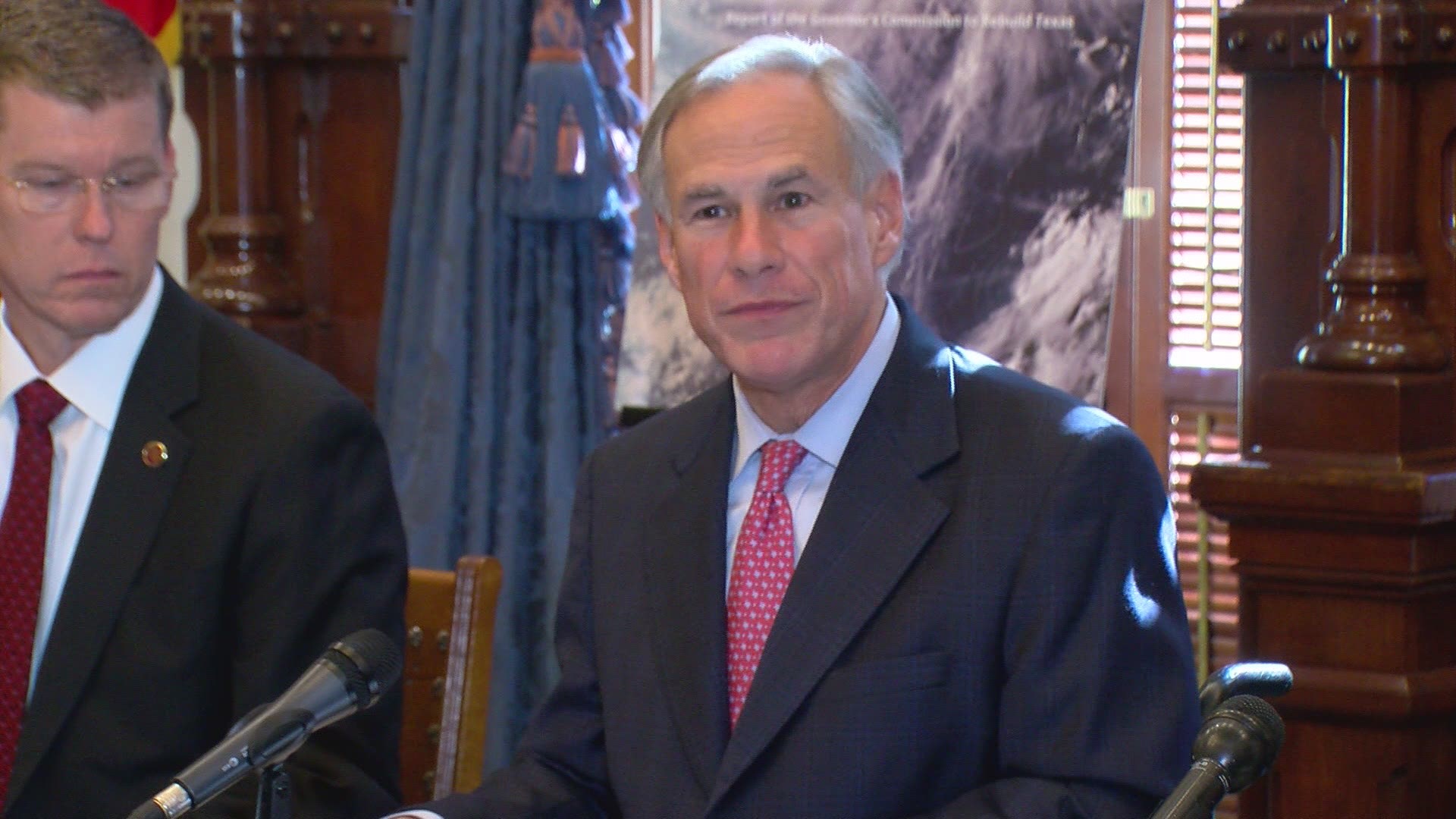 THE TEXAS TRIBUNE -- A commission convened by Gov. Greg Abbott to focus on rebuilding after Hurricane Harvey issued a report Thursday saying the state should take a series of steps to prepare for the next big storm, including improving local disaster response procedures and considering major infrastructure projects designed to harden the state against future disasters.

The 175-page report, which Abbott called a "roadmap" for the Texas Legislature and local communities moving forward, came more than a year after Harvey inundated parts of the Houston area with more than 60 inches of rain. It was compiled by the Commission to Rebuild Texas, which was overseen by Texas A&M University System Chancellor John Sharp.

"We knew when the hurricane hit, that Hurricane Harvey would deserve a Texas-size response," Abbott said. "By following the recommendations in the report, Texas will be better prepared to deal with future disasters."

The report praised Texas' response to Harvey, saying that "Texas is a national leader in responding to disasters." But it also highlighted problems that arose, including uneven preparedness among local jurisdictions and communication problems among first responders. And it said that "Hurricane Harvey was a warning that we should heed."

"The enormous toll on individuals, businesses and public infrastructure should provide a wakeup call underlining the urgent need to 'future-proof' the Gulf Coast — and indeed all of Texas — against future disasters," the report said in its executive summary.

The plan identified more than 4,000 potential projects geared toward that future-proofing. One recommendation is to consider “buy-outs” of properties that are consistently or severely damaged, while underscoring that homeowners would need to request or volunteer for a buy-out. The report points to the Federal Emergency Management Agency’s Hazard Mitigation Grant Program, which has already spent $555 million in Texas to acquire or elevate more than 4,000 properties.

Another possible strategy the report identifies is the prevention of home building in “vulnerable locations in the first place.” In April, the Houston City Council approved changes to floodplain regulations to reduce future damage.

The report also discusses the benefits of building a “coastal spine” to protect the greater Houston area from a hurricane’s storm surge. Depending on a given storm’s strength, the report identified savings of “$400 million to $7 billion” per storm if a coastal spine system was built. And it called for placing public infrastructure such as sewer and water lines in "the least flood-prone areas within a community."

But the report didn't go into details for how to pay for each individual project, many of which would require federal or local funds.

Sitting next to Abbott, Sharp talked about the importance of making sure someone in every county in the state was trained in disaster management. He also talked about institutionalizing the use of extension agents from the Texas A&M AgriLife Extension Service to better support the Texas Division of Emergency Management.

Harvey made landfall in August 2017. It left more than 90 people dead and caused extreme flooding in Houston and other areas near the coast. The storm was the costliest U.S. disaster in 2017 and the second costliest in U.S. history.

In November, an interim report from the Texas Senate’s budget-writing panel estimated that state government has already spent $2.7 billion on Harvey recovery. More than 80 percent of that came from federal sources.

The report was released on the same day the Texas Water Development Board released a state flood assessment. The 54-page report, also compiled for the Legislature, identifies strategies like improved flood mapping and modeling, and recommended coordinated watershed-based planning, to prepare for future floods.