Officials say the elderly couple and the boat owner would not have survived if they had not been rescued, as the sailboat was breaking apart. 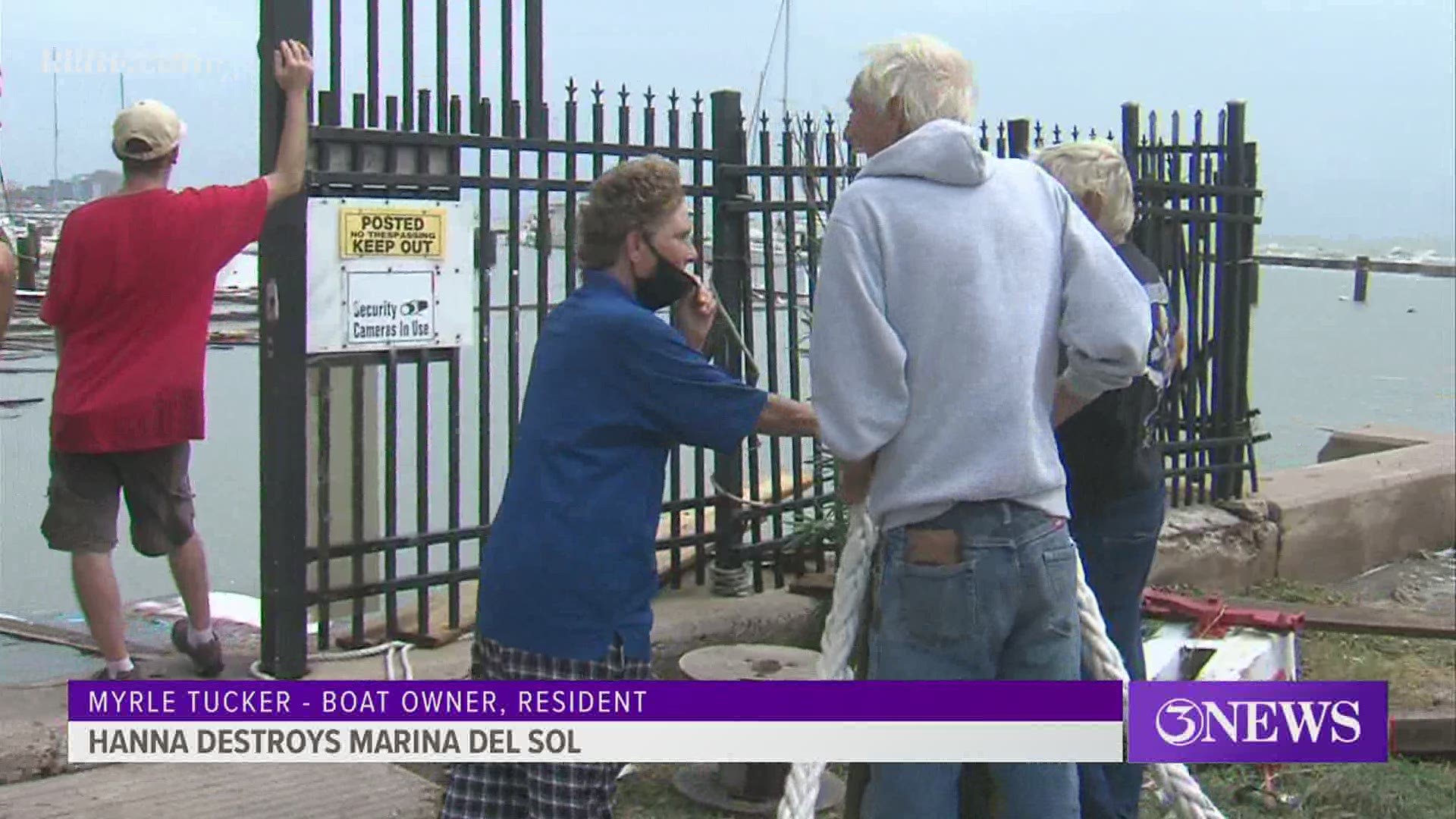 It's now just been a little over 24 hours now since Hurricane Hanna officially made landfall.

Reports and images of different kinds of damage across the coastal bend ranging from minor to life-altering.

3News spoke to people who say they lived on boats out at the Marina Del Sol Some of those homes are now gone. Fortunately, residents saved by first responders.

A harrowing rescue captured on camera showing the moment crews with the TX-TF1 water rescue saved boat owners and *residents from a sinking boat.

"I lived on a boat here,” said Myrtle Tucker, one of the residents rescued. “I was just so tired and tensed up and couldn't walk so they just came and carried me.”

Now, there are many boats damaged at Marina Del Sol, some completely destroyed and gone.

Owners went to the marina to see the wreckage for themselves and collect what they could.
For several owners these boats weren't just some prized possession.

Tucker sharing he's grateful to the rescue crews who were there just in time to save him and others.

“The boat was under the water below-grade. It's lost. It sank completely,” said Tucker. Tucker says he's been through 4 big storms and 3 boats, but this one was special.

"It was the boat I really always wanted,” said Tucker. Although Hanna has now passed through the damage she's left behind will be felt for quite some time.

WHAT WE LEARNED THIS MORNING, JULY 26:

According to officials, the Texas A&M Task Force 1 (TX-TF1) was requested by the U.S. Coast Guard and the Corpus Christi Fire Department to rescue three people from a sailboat as it was sinking in the marina.

"The TX-TF1 water rescue squad comprised of members from Washington County EMS and TX-TF1 Water Group Supervisor, Kevin Deramus, arrived as many of the boats in the marina were breaking apart and sinking," stated officials.

The rescue team met with the marina owner and the Corpus Christi Fire Department, and rescuers proceeded to launch their inflatable Zodiac rescue boats to save the three individuals trapped on the sinking boat in rough waters and 65 miles per hour winds.

“Specially trained personnel with specialized equipment were pre-positioned where they would do the best, for the most people, in the least amount of time prior to the hurricane making landfall," stated Jeff Saunders, Director of TX-TF1.

Because of extreme conditions, the U.S. Coast Guard and Corpus Christi Fire Department could not effectively launch boats in the marina to save the two elderly people in their 80’s and the 40-year-old boat owner.

The U.S. Coast Guard and the CCFD requested the assistance of TX-TF1, and Kevin Deramus was first on the scene, with the water rescue squad arriving minutes later.

Officials say the personnel on the sailboat would not have survived if they had not been rescued. Two inflatable Zodiac rescue boats were launched after agreeing on a plan with the marina and fire department personnel.

"Conditions were pretty rough, not going to lie, it was debatable, but the handicapped people on the boat were sending SOS using a flashlight and boats were literally ripping apart. I asked the rescue squad leader and boat operators if they felt comfortable. I got three thumbs up," said Kevin Deramus.

Rescuers got to the two elderly people first and the team returned to rescue the boat owner later.

"As the boat was returning to safety it hit debris causing damage to the motor. The rescuers had expected complications and added additional rescue personnel to crew the boat. As soon as the motor failed the crew used their training and switched to paddling the boat to safety," added officials.