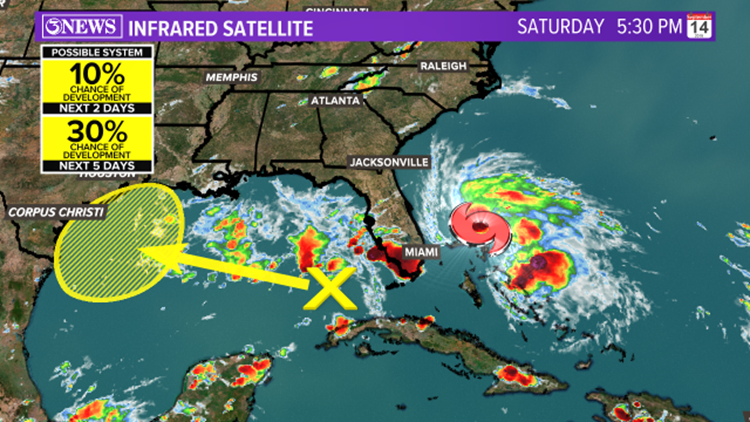 WEATHER BLOG: Disturbance in the Gulf of Mexico

This is the time of year we watch the tropics for a ramp in activity. In fact, there are multiple systems we are watching in the Atlantic. One of which is Humberto and that is a non-issue. In the Gulf of Mexico, there is an upper level low. A piece of energy that is not tropical in nature. However, on the southeastern side of this upper low, is an area of low pressure at the surface. While this is very disorganized at the moment, it has potential in forming into a named system in the next few days.

The National Hurricane Center is giving this tropical disturbance a 20% chance in developing over the next few days. This is subject to change. The problem is, this disturbance is going to run out of room. It looks to track over the Gulf of Mexico and push somewhere into the Coastal Bend. If you remember, Tropical Storm Fernand formed in the gulf weeks ago and made landfall early over eastern Mexico. Due to this, it rapidly weakened. Tropical systems constantly need open warm water to continue strengthening. This looks to be a similar scenario to Tropical Storm Fernand which resulted in beneficial rain for our area.

Below are a few scenarios from different numerical weather prediction models showing the potential and track of this tropical disturbance. While this track and intensity may change over the next few days, one thing is for certain. It will swing some moisture our way in the form of scattered showers with some isolated thunderstorms.

The European model (ECMWF) is a reliable model that is used globally. Notice the time in the upper right hand corner. Late Monday into early Tuesday, we'll begin to see an influx of moisture moving our way. This particular scenario is going for a bit more coverage than other weather models. This disturbance looks to linger around the Texas coast through mid-week.

The snapshot above is showing the Global Forecasting System (GFS) model at a similar time this upcoming Tuesday. If you compare this to the other model run, it's going for less coverage. Isolated showers and storms with mostly cloudy skies Monday through Wednesday. Rain accumulation could range from 1.0"-2.5" across the viewing area with isolated communities potentially seeing more rainfall. We will continue to update future rainfall totals as we get a better handle on the potential of this tropical disturbance

Here is the last scenario. This is the Rapid Precision Model (RPM). Most of these are very similar in track, intensity and timing. With that being said, this would be a tropical system we are wanting to see. Considering the lack of rainfall over the year.

Again, the track and intensity may change over the next few days so keep up with the forecast online and on Channel 3. These are a few scenarios to put your mind at ease considering the buzz across social media. Expect a rapid increase in rain chances over the next few days as we continue to watch the tropical disturbance race over the Gulf of Mexico.