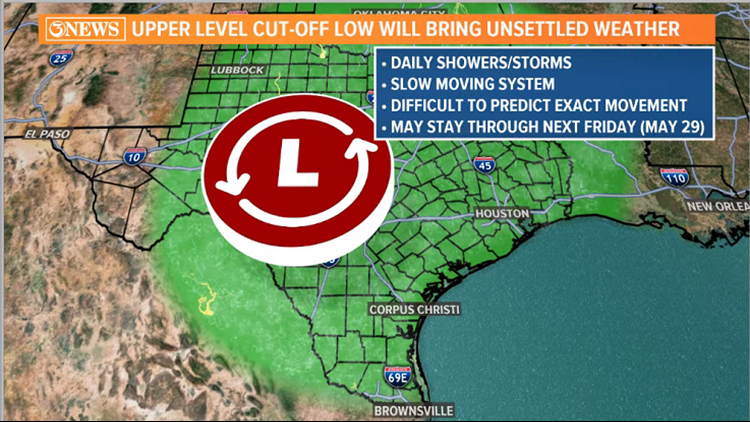 CORPUS CHRISTI, Texas — The weather forecast is going to become much more active/unsettled into next week - including Memorial Day - as a disturbance in the upper levels of the atmosphere moves in to Texas and stays put; maybe through as long as next Friday.  This feature is called a 'cut-off low', as it is detached from the main flow of the upper level jet stream winds.  I grabbed an image from the GFS forecast model showing the feature in question over Texas and cut-off from the upper level jet stream winds to the north.  This is the 250mb level of the atmosphere for the weather weenies out there - valid Tuesday, May 26.  Easy to see, right?  There's an arrow there if not...

Cut-off lows tend to linger over areas for multiple days and move around subtly; therefore making subtle changes to the forecast below.  One of these was over the eastern half of the U.S. this week.  As general rule of thumb: areas under these tend to be unsettled.  Not to the point where it's steady rain all day every day, but enough instability to keep daily chances for scattered hit/miss showers or storms in play.  So, it could be that one day you get several showers or storms, and the next you get nothing, then another storms the following day.  That type of forecast.

The majority of Texas will be influenced by this feature, starting Sunday through all of next week.  The length of time this cut off low stays over us may change as we head into next week, as that is still 7 days away.  Given the run of day-to-day showers or storms this system will offer Texas, rainfall will be on the order of several inches for a lot of Central Texas.  As of writing (Friday May 22), parts of Central Texas could receive over a half a foot of rain - including parts of our watershed.  This is enough rain to translate to localized flooding in some areas.  Something to watch for.  As always when we initially begin talking about forecasts like this, they do evolve as more data becomes available and will be refined in due time.

Each day will present it's own unique forecast that will need to be tackled with more clarity when the time comes.  Being that it's still a few days away from developing, we can talk in generalities and not specifics like timing, strength, and exact rainfall estimates at this point.  Stay tuned for future updates as needed.

For perspective, if Corpus Christi were to get close to 3" of rain next week, It would bring us up to near yearly normal as we head into the hot summer months.