A concentrated plume of Saharan Dust will work into the Gulf of Mexico states this week. Hazy skies and symptoms resembling allergies for some, expected. 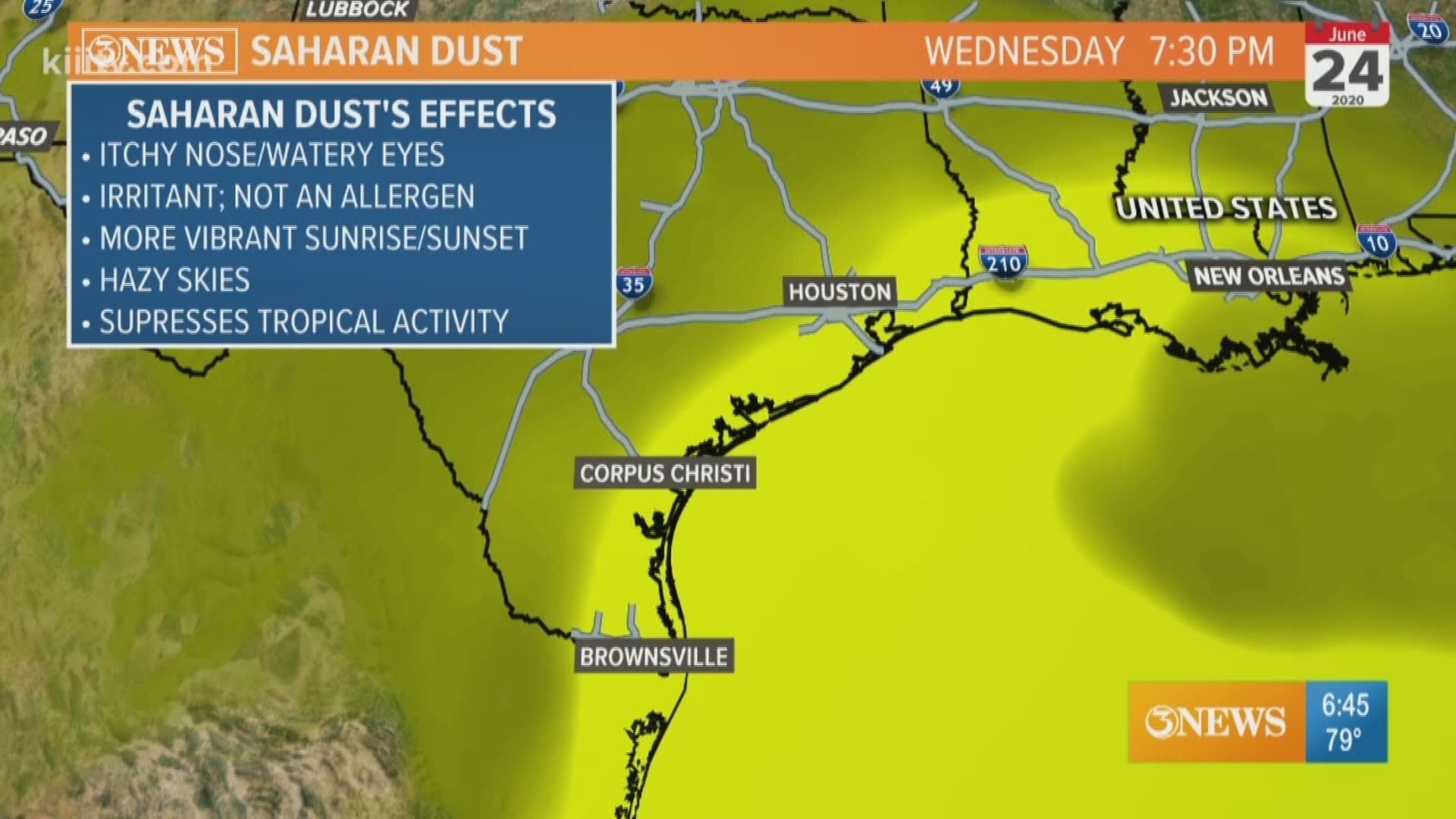 CORPUS CHRISTI, Texas — A large plume of Saharan Dust in the Atlantic Basin and Caribbean Sea is forecast to move into the Gulf of Mexico and surrounding states this week.  This is something that happens on a yearly basis as trade winds carry the dust from Africa across the Atlantic.  The concentration of dust that makes it to Texas varies from year to year, sometimes not making it into Texas at all.  This year's plume looks like the most impressive one in the eight year's that I've been here. You can see it over the Caribbean Sea on satellite imagery from this morning (6:50am).

The Saharan Dust is forecast to start moving in to the Coastal Bend on Tuesday.  You'll be able to detect this as skies become hazier.  The reason skies become hazy looking has to do with the way light interacts with the dust - it's called Mie Light Scattering.  It happens when wavelengths of light are roughly the same size as the particles of particles in the air; in this case, dust.  When this happens, it generates hazy/milky skies.  The same thing happens with smog.  NOTE: the two other types of light scattering in the atmosphere are Rayleigh and Non-selective.

After the Saharan Dust arrives Tuesday, it will gradually thicken up, becoming more concentrated over the Coastal Bend by the weekend.  Compare and contrast the image above and the image below.  See how the yellows are more vibrant below?  That's indicating a higher concentration of dust, Friday.

With concentrations of dust becoming high, people with respiratory ailments will need to limit time outside and/or wear a mask (thankfully many of us have them now).  The dust can also lead to symptoms that resemble allergies, but it's important to note that this is not an allergen; it's an irritant.  So, allergy medicines may not be effective if you have symptoms because of the dust. Saharan Dust also serves to generate more vibrant sunsets/sunrises and suppress tropical developments.

Alan Holt 3 News Meteorologist
A plume of Saharan Dust will start to move into the Coastal Bend, Tu... esady. The dust will become more concentrated by the end of the week. Skies will become very hazy and sunrises/sunsets will be more vibrant with more red and orange hues.

The Saharan Dust is forecast to be in South Texas starting Tuesday, through at least the weekend.  So, it's not going to be a short-lived episode this time around.