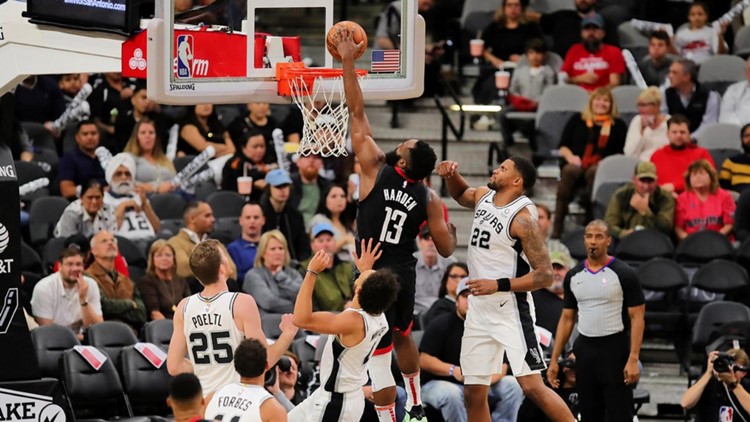 Rockets fans want the NBA to count Harden dunk or award win, but Spurs fans aren't having it

SAN ANTONIO — According to ESPN NBA reporter Tim MacMahon, the Houston Rockets are asking the NBA’s league office to step in and change the result of Tuesday night’s game. The Spurs went on to win 135-133 in double overtime, but the Rockets say it shouldn’t have gone that far.

A James Harden dunk with 7:50 left in the fourth quarter was not counted after the ball went through the net and back up on the rim. When viewed in live action, it could be seen as a missed shot, but the ball did pass through the rim.

The referee who made the call admitted after the game the call was missed, and the Rockets waited too long to use a coach’s challenge on the incident.

RELATED: See the botched call on a Harden slam that may have cost the Rockets a win over the Spurs last night

The Rockets want the NBA to award them a win or order the final 7:50 to be re-played. In the latter case, the Rockets would begin with a 104-89 lead, which would have been the score after the dunk.

Either of those actions would be unprecedented in NBA history. Blown calls are a part of the game, and San Antonio fans have a fine counter-argument from a few minutes earlier in the same game. The Rockets scored on an inbounds play in the final seconds of the third quarter, but that basket shouldn’t have counted on a missed backcourt violation.

The sports talk shows on Wednesday morning weren't having it when the story came up.

Fans noted that this isn't the first time the Rockets have tried protesting a perceived slight. The franchise's Twitter page posted a series of tweets arguing in favor of Harden after Giannis Antetokounmpo won the 2019 MVP award.