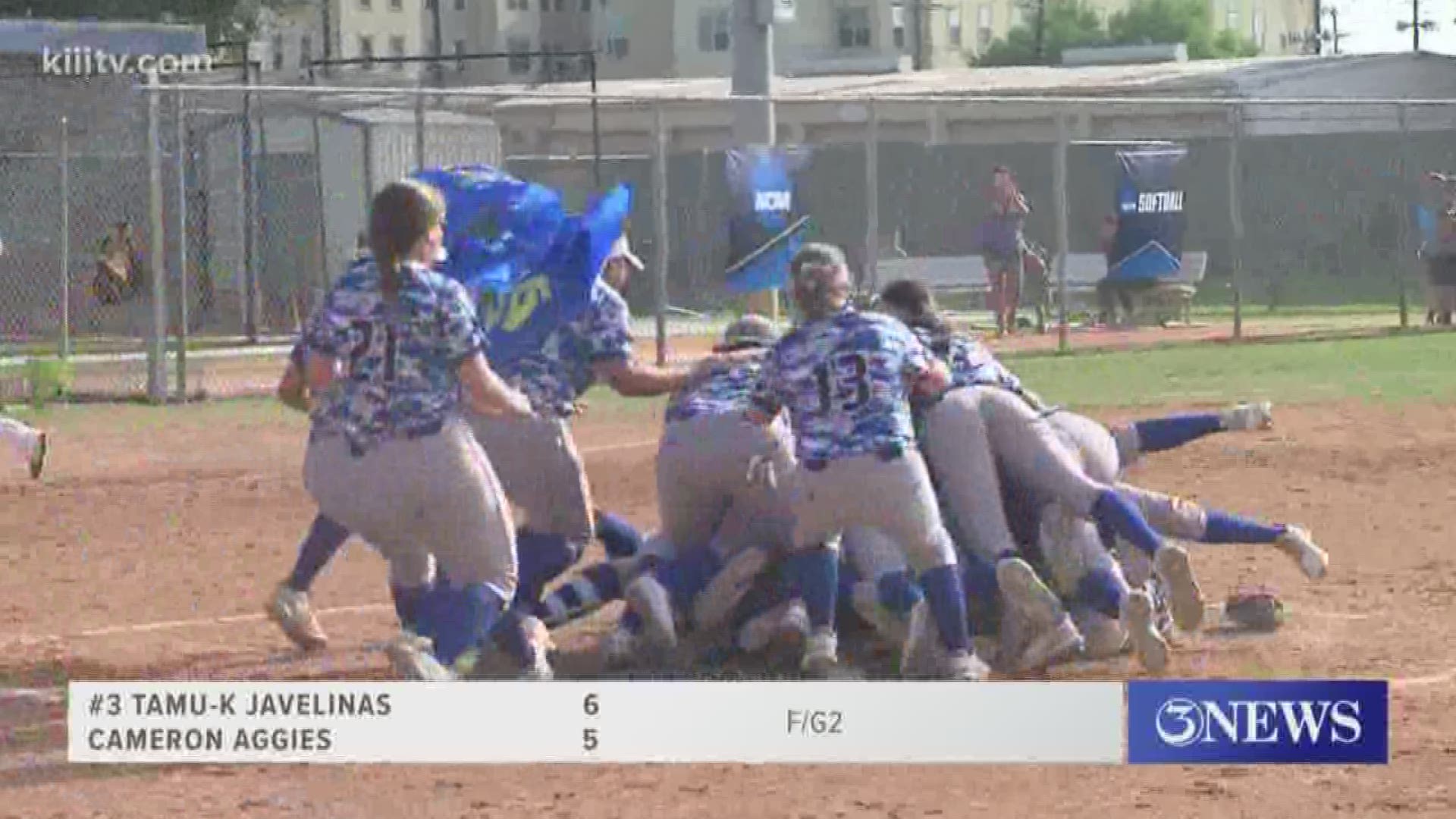 KINGSVILLE, Texas — In a year full of firsts for the Texas A&M-Kingsville softball team, the Javelinas reached yet another program benchmark with a 6-5 defeat of the Cameron Aggies on Friday at Hubert Field in Kingsville, Texas, capturing the program's first-ever South Central Regional Championship. This title punches the Javelinas' ticket to the Division II Softball Championships, which will begin on Thursday in Denver, Colo.

The Javelinas have now won 14 straight games and, at 48-8, have set a new program record for wins in a season.

"What a battle," said coach Craig Nicholson. "What a resilient effort by our group. All of a sudden, we're a comeback team. Some things happened in the first inning that were out of character [for us], but we got the ship righted and kept plugging away. Our team really believes they're going to win."

For the second straight day, the Aggies got on the board first, jumping on starter Saidi Castillo (Kingsville, Texas) for four first-inning runs. A single and a walk brought up Callie Busby and she dropped a two-run double into right-center. Busby scored one player later on a fielder's choice and, two batters after that, Bethany Hines reached on an infield hit that scored Kylie French for a 4-0 lead.

Cameron's Rylee Willmon held that lead for the next two frames before the Javelinas mustered a comeback in the fourth. A walk and two singles brought up freshman Makenzie Mays (Conroe, Texas), who battled back from down 1-2 to run the count full, then drilled a grand slam to left to bring the Javs even at four.

"Coach has always told us to slow the game down and breathe," said Mays. "I was just trying to take so many deep breaths. So many things had to happen for me to get that at-bat and I just appreciated the opportunity to help my team."

The lead was regained by CU just a half-inning later thanks to consecutive hits by Brenna Busby and Khmari Edwards, but TAMUK knotted the score again just as quickly. Sophomore Loren Kelly (Rockport, Texas) led-off the fifth with a triple and tallied her side's fifth run when senior Victoria Schoonard-Saborio (Elk Grove, Texas) hit a sacrifice fly.

Both squads threatened in the sixth, only to see each opportunity come up empty. Freshman Veronica Chavez (Tempa, Ariz.) singled to start the inning and pinch runner Yvonne Castillo (Leander, Texas) took second on a wild pitch. With two outs, consecutive walks loaded the bases but Kelly's groundout killed the rally.

Cameron put their first two on a half-inning later, but junior Breanna Smith (20-3) (San Antonio, Texas) set down three straight and the score remained the same.

The run that won the game for the Javs crossed the plate in the seventh. Sophomore Anastasia Leibas (Del Valle, Texas) drew a one-out walk and junior Sydney Andrews(Belton, Texas) was sent in to run for her. Two batters later, Chavez roped a hit into left and Andrews motored all the way home with the go-ahead run. A two-out walk was all Cameron could muster in their half of the seventh, with Claire Chernosky (Sugar Land, Texas) throwing out Abbey Warren for the final out.

The Javelinas now will wait to see where they are seeded and who they will play on Thursday on the first day of the Division II Softball Championship.  To keep up with everything related to Javelina softball during the postseason, fans can stay up-to-date with Javelina softball throughout the season by following @TAMUKSB and @JavelinaSports on Twitter, @JavelinaSports on Instagram, liking Javelina Sports on Facebook and visit Javelinaathletics.com.