Message In A Bottle: A rare find along the beach near Port Aransas

Once it was out, it didn't take long to figure out the mystery behind who sent it. The message was dated November 15, 2017. 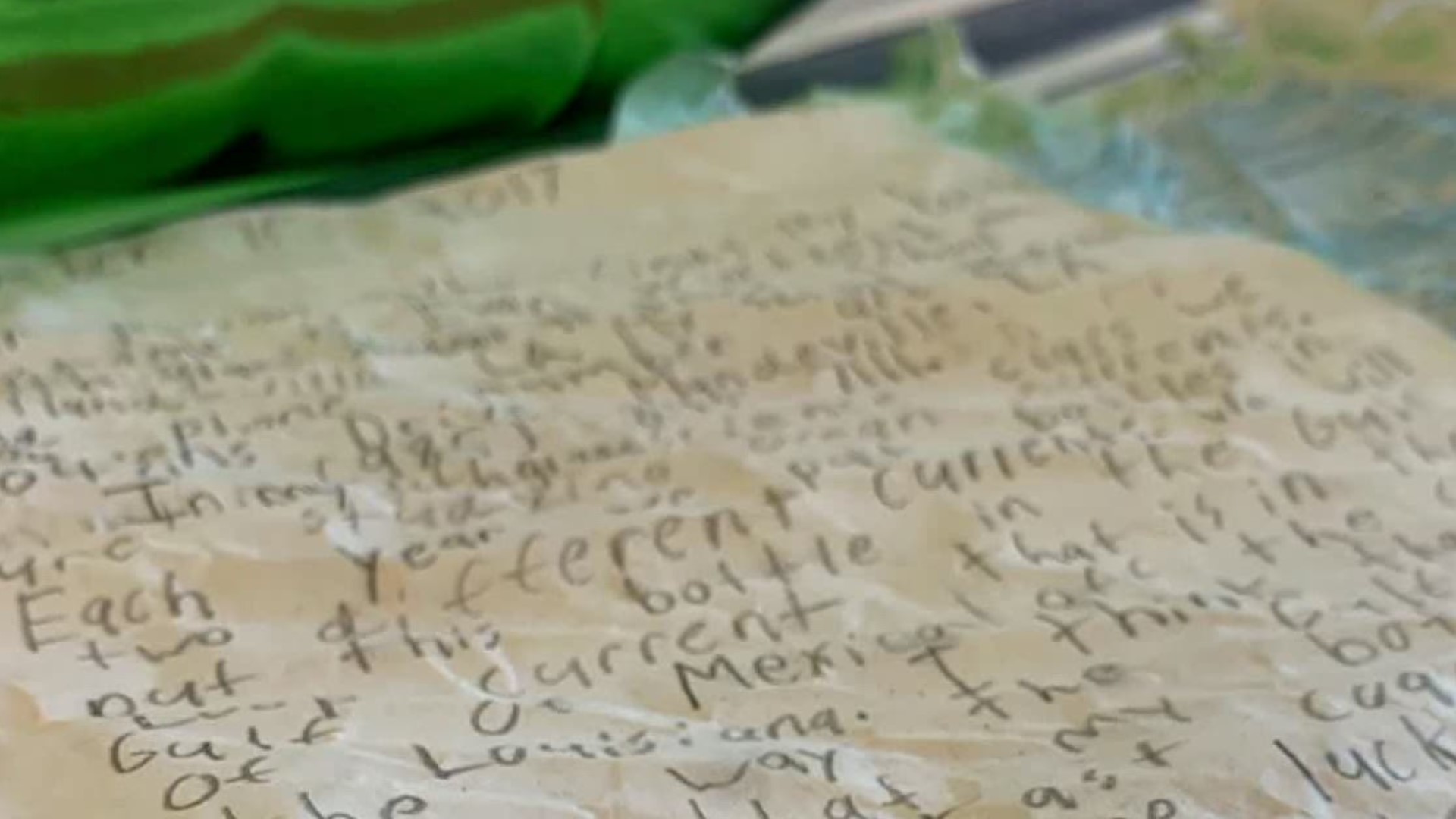 PORT ARANSAS, Texas — You never know what the waves will wash onto the shore. A local Marine Biologist recently made a rare find out along the beach near Port Aransas.

Jace Tunnell is the Director at the Mission-Aransas Reserve which is located at the UT Marine Science Institute. He ended up discovering a message in a bottle and it turned out that bottle had been on quite a journey in the Gulf of Mexico for the last three years.

"Whenever I picked it up, I looked at it and I could tell there was a drawing in there, and there was another piece of paper with some writing," Tunnell said.

Tunnell made the discovery in the days that followed Hurricane Laura as it moved across the Gulf. He was conducting a beach survey on Mustang Island when the bottle caught his attention.

Getting the rolled-up letter out of the bottle, however, would prove to be a challenge because the paper was wet.

"Opened it up, and tried to get the note out right away and it kind of ripped a little bit, so I had to wait a few days for the A/C to dry it out," Tunnell said.

Once it was out, it didn't take long to figure out the mystery behind who sent it. The message was dated November 15, 2017.

It reads, "Dear person who finds my bottle. My name is Evan Wurtzel."

The author was a 4th grade student from Mandeville, Louisiana, which is north of New Orleans. In the letter, he explained that the bottle was thrown in the water as part of a Science experiment, teaching about currents.

Wurtzel is now in 7th grade and 3News was able to track him down and ask him about his letter.

"I thought it was very cool, wherever the bottle was these three years, that it would end up in Texas," said Wurtzel. "For a few years, I didn't think it was going to be found because all my classmates' letters were found and mine never was."

At first glance, a second piece of paper inside the bottle could very well be mistaken for a treasure map, but it was actually a drawing of the Gulf and the currents.

"It had the currents drawn on it, so I could tell that it was from somebody that was doing a project," said Tunnell who was also able to speak to the student.

"Apparently the whole class had thrown bottles out into the ocean and this was the last one to be found," said Tunnell.

This isn't the first message in a bottle that has been discovered by Tunnell. You could call him an expert at finding them. He actually has a couple of shelves at home with all of the bottles he has picked up over the years. The count is now up to 15.

If you want to be lucky enough to find one of these for yourself, Tunnell had a few tips. The first is that you have to start early.

"After these storms come through, you can find debris lines in the stand, pushed up or behind the sand dune, and that is a really good way to find messages in a bottle," said Tunnell.

He also said he hopes Wurtzel, who is now 12-years-old, will remember this experience, and his other hope, "since he had drawn up this map of the ocean currents, he will be a Marine Biologist like myself," Tunnell jokingly said.

You can follow Tunnell's beach combing adventures. He has his own YouTube channel, you can find it here.